First Look – Jimi: All Is By My Side

Of the recent slew of rock biopics, this Jimi Hendrix film is the one that seems to get it just about right. 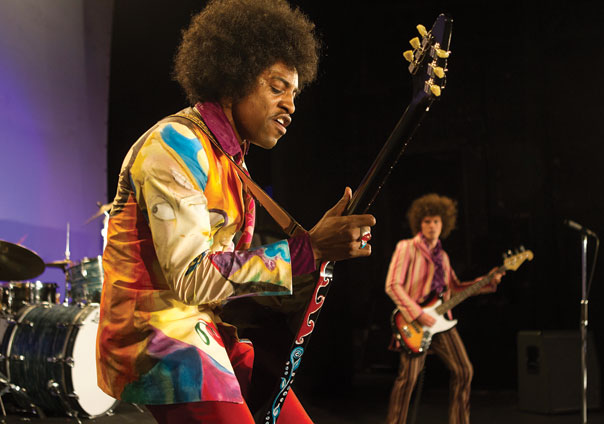 Of the recent slew of rock biopics, this Jimi Hendrix film is the one that seems to get it just about right.

The traditional route followed by film makers tasked with bringing a life to the big screen is to attempt to cover the entire arc of a career. This cradle to the grave strategy often yields disappointment: there’s too little time to get into the grain of the characters and the need to condense a full life history into two hours ultimately favours brisk broad strokes rather than chunky, rewarding detail. Writer-director John Ridley – whose screenwriting credits include U-Turn, Three Kings and, most recently, 12 Years A Slave – jettisons this rather unwieldy strategy in favour of focussing on a transitional year in Hendrix’ life. As it transpires, this is a satisfying way of doing business. The year in question is 1966 – ’67, as Ridley charts Hendrix trajectory from playing with Curtis Knight & The Squires in New York’s Cheetah Club to headlining London’s Saville Theatre with Paul McCartney and George Harrison among the audience; less than two weeks later, Hendrix was on a plane to the Monterey Pop Festival.

Ridley, in the first instance, has on significant problem: the Hendrix Estate have no given permission for any of Hendrix’ music to be used in the film. Ridley gets round it by using clips from Hendrix’ cover (“Wild Thing”, etc) or, in the case of the Saville Theatre show, by filming the Jimi Hendrix Experience covering “Sgt Pepper’s Lonely Heart’s Club Band” in its entirety, as they did at the gig. Perhaps wisely, Ridley doesn’t attempt to explain Hendrix’ mercurial gifts; instead he concentrates firstly on Hendrix’ relationship with the two women who helped break Hendrix in the UK and, secondly, by exploring the times themselves.

The two woman are Linda Keith (Imogen Poots), the 20-year old British model who became his unlikely svengali and brought him to the attention of his future manager, Chas Chandler; and Kathy Etchingham (Hayley Atwell), his girlfriend during his British sojourn. Both Poots and Atwell are excellent – the former wise and poised but increasingly drained by Hendrix, while the latter a rawer, more passionate presence. As Hendrix, Andre Benjamin captures Hendrix’ feline gracefulness, but also a more infuriating aspect: he can be both remarkably clued up and curiously naïve, both passive and stubborn. There is a selfishness, too, about him, that he is motivated only by the things he’s interested in and less concerned with the thoughts or feelings of those around him.

Ridley – directing for the first time here – also does much good work in depicting Sixties’ London. He finds the place in transition: Corrie on the TV, Salvation Army bands in the park, racist policeman and grubby, sooty streets. The evidence of Swinging London in the Summer of Love is scant; it is, we discern, really only a few people – the rock star elite and their associated – who are enjoying the benefits of being tuned in and turned on. The Regent Street Polytechnic, where Hendrix joins Cream on stage, is a grubby, flyblown hall, the band squeezed in at the end of the room. There is little sense of history being made, or myths taking shape here. It’s just a lot of sitting around in clubs and hanging out, giving the film a meandering Altmanesque vibe that’s entirely to its credit.

Jimi: All Is By My Side opens in the UK on October 24