There are many delights on offer in David Bowie – Five Years, the BBC’s terrific new documentary focussing on five critical periods in Bowie’s career. Here’s a longhaired Bowie, sporting a natty fedora, at Andy Warhol’s Factory in 1971, miming being disembowelled. And here he is on The Dick Cavett Show in 1974, wearing a dark blue shirt, tartan tie and brown trousers, twirling a cane while he performs “Footstompin”, a cut that eventually became “Fame”. 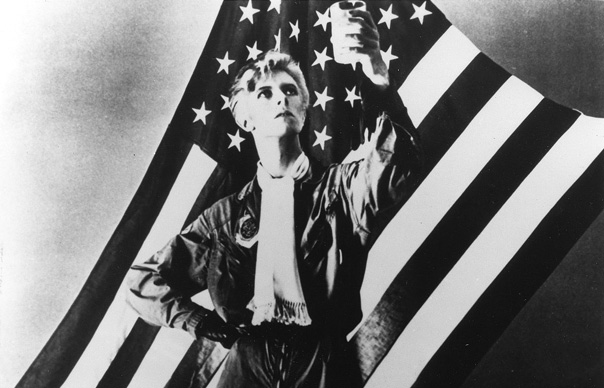 There are many delights on offer in David Bowie – Five Years, the BBC’s terrific new documentary focussing on five critical periods in Bowie’s career. Here’s a longhaired Bowie, sporting a natty fedora, at Andy Warhol’s Factory in 1971, miming being disembowelled. And here he is on The Dick Cavett Show in 1974, wearing a dark blue shirt, tartan tie and brown trousers, twirling a cane while he performs “Footstompin”, a cut that eventually became “Fame”. Elsewhere, you’ll find Tony Visconti reminiscing about the day he explained to Bowie and Brian Eno how his new Eventide H910 Harmonizer “fucks with the fabric of time.” Meanwhile, here’s Carlos Alomar’s revelation that he found the clean, happy and well-adjusted Bowie of Let’s Dance to be “a little odd”.

The gang’s all here – Ziggy, the Thin White Duke, Major Tom – along with such luminous co-conspirators as Eno, Robert Fripp, Ken Scott, Woody Woodmansey, Carlos Alomar, Dennis Davis, Nic Roeg and Earl Slick. The question is, what are we getting here that’s new? Considering these chapters in Bowie’s career have already been extensively documented, what can David Bowie – Five Years bring that we don’t already know, what fresh insight does it offer? How does this contribute to the sum total of Bowieness in the universe – which after the rumpus earlier this year is already approaching critical mass?

It is, essentially, all about the detail. Here, in unseen black and white footage from 1972, is Angie Bowie at an early and poorly attended Ziggy show, pressed right up against the front of the stage, screaming at her husband during “Suffragette City” like she was at a Beatles gig. Later, Spiders From Mars drummer Woody Woodmansey recalls, “It’s funny, but he would eat breakfast as a superstar.” I guess fame is what connects these individual glimpses into Bowie’s career. Hearing Woodmansey’s comment reminds me of the line in Bowie’s diary from 1975, an extract of which is on display in the V&A exhibition, where Bowie describes “Fame” as “my first co-write with Lennon, a Beatle, about my future.” Interviewed in this documentary about the Let’s Dance period from seven years later, Nile Rodgers admits “I was charged with the responsibility” of giving him hits.

What does this say about Bowie? That he’s had intractable belief in his success all along, to such a degree that it influenced the way he ate his Weetabix? That he deliberately sacrificed the mystery and distance that made him so exceptional in the Seventies in order to achieve global superstardom in the early Eighties? “We’re out of characters now, just into suits,” he says in an interview around Let’s Dance, basically foreshadowing the rest of his career throughout the Nineties and early Noughties. “The suit will change form tour to tour but the bloke inside it is generally much the same.”

You could be forgiven for thinking the Let’s Dance album – and the Scary Monsters period that preceded it – would be the fresher stories here. After all, they’re certainly less raked over than Ziggy or the Berlin years. Yet, perhaps surprisingly, they clock up the shortest running times in the film – 11 minutes is devoted to Scary Monsters and 15 for Let’s Dance. (In comparison, Ziggy receives 20 minutes, Young Americans gets 22 and Heroes clocks in at 19.)

I suspect much of this has to do with who the producers have on hand to talk, and to their credit they favour the musicians who were there on the ground, rather than filling in gaps with journalists and other available commentators. Certainly, the Young Americans and Heroes sections benefit from the extensive input of Alomar, Davis, Slick, Visconti, Eno, Fripp and Ava Cherry. The personable Alomar and Davis are especially good value, but there’s one great story about the day they arrived in the studio to find Eno had set up a blackboard with charts on it – “like elementary school,” says Davis with disbelief. Fripp is particularly funny, enthusiastically describing the “hairy rock’n’roll” he was requested to play on Heroes. The 1974 – 1975 and 1976 – 1977 years also contain the meatiest part of the narrative: Bowie’s American sojourn, his cocaine addiction and eventual recuperation in Berlin. In one interview here, Bowie claims to have been “very, very worried” after coming “close several times to overdose… It was like being in a car going towards the edge of a cliff. I had almost resigned myself to the fact I’m going over the edge and I’m not going to be able to stop.”

The footage is brilliant, whether you’ve seen it before or not. Personally, I loved the beautiful black and white footage from the Young Americans tour rehearsals, with Bowie leading Luther Vandross and his backing singers through a terrific version of “Right”. Or a 1974 press conference at the Amstel Hotel in Amsterdam, Bowie in a smock and eye-patch asking for a drink. Doorstepped by Janet Street Porter en route to the stage at Earl’s Court in 1978.

And then there’s the Penelopes. From 1973’s “Life On Mars?” video right up to a press conference convened at Claridge’s a decade later to announce his signing to EMI, those teeth also are surely worth a documentary in their own right.

David Bowie – Five Years screens on BBC Two on May 25