With the death of Ernest Borgnine, aged 95, it feels like yet another precious link back to a golden era of Hollywood film making has gone. 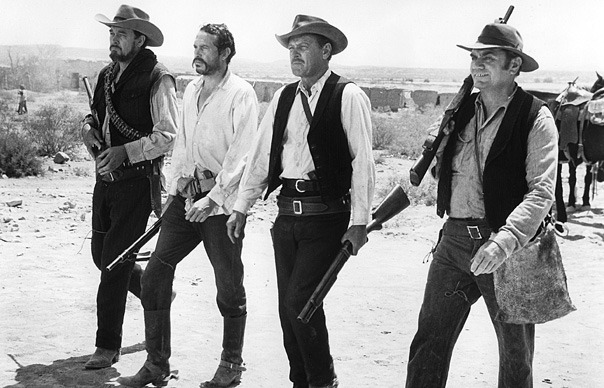 With the death of Ernest Borgnine, aged 95, it feels like yet another precious link back to a golden era of Hollywood film making has gone.

Borgnine – a salty, stocky presence in films from 1951 right up to the present day – played opposite Randolph Scott, Frank Sinatra, Sterling Hayden, Tony Curtis, Kirk Douglas, Lee Marvin, Rod Steiger and Spencer Tracy. He was, as they say, the supporting actor’s supporting actor – a reliably terrific bad guy in movies like From Here To Eternity, Bad Day At Black Rock, Vera Cruz and Nic Ray’s Johnny Guitar. Conversely, he ended up winning his only Best Actor Oscar for Marty, playing a lonely, self-concious butcher from the Bronx.

Borgnine appeared in many of our favourite films, from The Dirty Dozen to Escape From New York. We loved how he swaggered through The Vikings, playing a 9th century Viking chieftain with a thick Bronx accent. Or the way he and Lee Marvin corralled volatile, larger-than-life figures like Telly Savalas, Donald Sutherland and John Cassavettes in The Dirty Dozen.

But it’ll be for his role as Dutch Engstrom, William Holden’s sweaty, nasty right hand man in The Wild Bunch, that we’ll best remember him here at Uncut. As they say, “Let’s go.”