The shouts begin in earnest around the first encore – most of them are calls for specific songs, accompanied by a smattering of “We love you”s, but the one that raises the biggest cheer is simply: “Where have you been?” 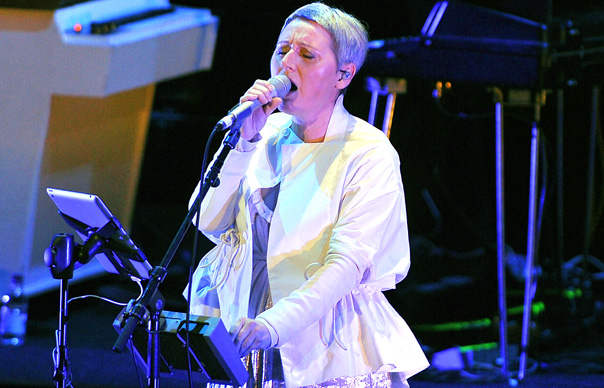 The shouts begin in earnest around the first encore – most of them are calls for specific songs, accompanied by a smattering of “We love you”s, but the one that raises the biggest cheer is simply: “Where have you been?”

It’s a good question. Since the Cocteau Twins’ last studio album – 1996’s Milk And Kisses – Liz Fraser has become an elusive and enigmatic presence. There’s been occasional cameos (notably with Massive Attack in 1998) but her own solo output is limited to a white label, “Underwater”, in 2000 and a single, Moses”, in 2009. Her reluctance to return to music, and particularly live performance, is understandable – one former colleague of mine remarked recently that watching a Cocteau Twins’ gig was like watching the Crucifixion, it was so painful to see Fraser struggle to make her voice heard through the band’s dense sound. I remember seeing her join Massive Attack at Hyde Park in 2006 to sing “Teardrop”, and literally fleeing into the wings after she’d finished.

Her return to active service for two shows, then, forms the centrepiece of Antony Hegarty’s Meltdown festival. The result is occasionally breathtaking, occasionally not. Fraser’s voice is, predictably, the sell here. Warmer and lighter, though no less remarkable, than in her Cocteau’s days, it flutters and glides across the songs – a mix of delicately retooled Cocteaus songs and new material, presumably from her slowly-gestating solo album. Of the new material, the best has an incidental music from Twin Peaks vibe to it, classy and slightly off-kilter; alas, there are also moments where her band slip into a polite but torpid groove. Close your eyes, and it could almost be a Bryan Ferry solo show.

The set is sparse. There’s DJ in the corner, who I think is playing loops and weird, ambient passages between the songs. Fraser is accompanied by eight people on stage, the bulk of her band comprised of former Spiritualised members, drummer Damon Reece (also Fraser’s partner), bassist Sean Cook, guitarist Martin Shellard and – resplendent in a sequined jacket with industrial sized shoulderpads, looking like Grant Morrison’s King Mob from The Invisibles – Tim Lewis, aka Julian Cope henchman, Thighpaulsandra. Two backing singers do much of the heavy lifting here on the high notes. Fraser, wearing pristine white, consults an iPad attached to a music stand. Everyone is dressed in black or white, the lighting palette mostly soft greys and whites, with bursts of blue neon. Occasionally, there are strobes. Steve Hackett guests, his acoustic guitar perfectly complimenting Fraser’s voice; an unusual pairing considering we’re more used to hearing Fraser up against Robin Guthrie’s harsh cascading chords, but perhaps this is a sign of more music to come.

There are certainly highlights. As you’d expect, the Cocteaus material is greeted emotionally – the pared-back readings of “Donimo” and “Pearly Dew Drops Drop” are tremendous, lower lip-trembling stuff. Elsewhere, the hushed, intimate version of “Song To The Siren” that closes the show is properly moving. But, in truth, Fraser could fart her way through the national anthems of Europe and she’d get still three standing ovations. As it is, whatever the weak points, it’s a pleasure to welcome her back.

Song To The Siren