The ecstatic music of 75 Dollar Bill 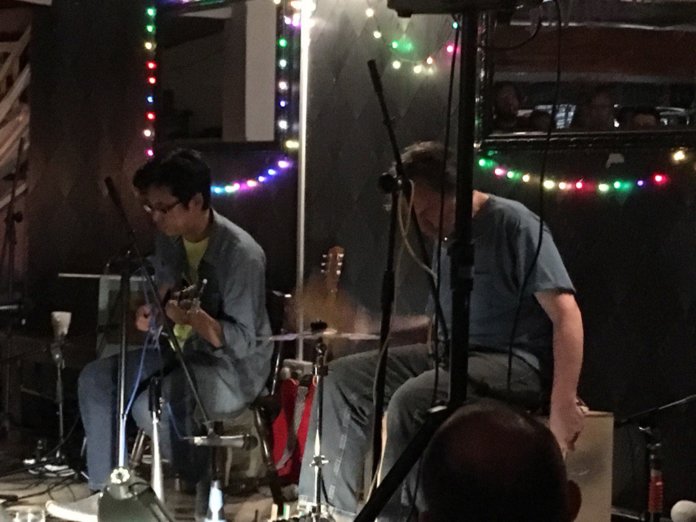 Still reeling slightly from the show I saw last night in Cambridge, where 75 Dollar Bill, the duo who made my favourite album of 2016, played a pretty transcendent hour. That album, “Wood/Metal/Plastic Pattern/Rhythm/Rock”, has had a wider European release this past spring on the promising new Tak:Til imprint, that’s also now home to Natural Information Society.

I guess regular readers will probably have seen my encomiums for 75 Dollar Bill before: to recap, a New York duo (Rick Brown and Che Chen) who operate somewhere on the interface between blues, drone, psychedelia, post-rock, Arabic music, cosmic jazz and desert rock. Regarding “Wood/Metal/Plastic/Pattern/Rhythm/Rock”, I wrote last year that, if Tinariwen and their compatriots reclaimed American blues and transformed it into something dusty, trance-inducing and redolent of their Saharan home, 75 Dollar Bill are an astonishingly potent next stage in an ongoing cultural exchange. The duo’s second album comprises four deep desert blues jams, pivoted on the rattling percussion of Rick Brown and the serpentine guitar lines of Che Chen, who could plausibly sub for Ali Farka Toure in a duet with Toumani Diabate. Horns and violas add further textural levels of drone, but it’s the interplay between the core duo, and between the American and African influences, that gives Wood/Metal… its hypnotic pull. “I’m Not Trying to Wake Up”, in particular, is magnificent; like a gnawa ritual that’s been convened by Junior Kimbrough.

Brown’s rattling percussion, it transpires, mostly amounts to a tea chest that he sits on and thuds with an array of bells, shakers and weaponry. Chen mostly plays 12-string electric, though there are other things going on around his feet, including a small electric keyboard with notes held into drones by bits of cardboard sticking between the keys. “I had been playing these modal, rhythmic things,” Chen told Uncut’s John Robinson at the back end of 2016, “and knew they needed drums to complete them somehow. I was really interested in folk dance musics from various parts of the world, which often use strings or horns and very simple drums. When I heard Rick’s box it made a lot of sense.”

It’s an unorthodox set-up, and one of the wonders of the live show is how it translates into such an organic, absorbing kind of devotional music. Brown and Chen begin with a long, free passage of reed drones, bells and static, that gradually evolves into a stunned, ultra-slow take on the mighty “Earth Saw”. Again and again, Chen’s riff – oddly reminiscent of Slint, as my partner notes – looks likely to break, change course, but much of the performance works like an investigation into the hypnotic possibilities of delayed gratification. I’m not sure I’ve enjoyed a single piece of live music more this year.

After that, “Beni Said” moves on from another processional start into something wilder and more euphoric: there is talk from Rick Brown of dancing, but only head-nodding in response. They talk about the instrumental music played at breaks in the singing at Mauritanian weddings; a critical schooling of Che Chen, who studied there with Jeich Ould Chigaly, husband of the wonderful singer Noura Mint Seymali, in 2013.

“It was kind of a crash course in the Moorish modal system,” Che recalled to John Robinson. “I can’t claim to have anything but a superficial understanding of the modes, but it had a huge impact on how I play guitar. It was also great for me to see this very different way of musicians existing in society.

“I had guitar lessons with Jeich everyday and at night we’d go to his ‘gigs’ – which in Mauritania means weddings. It was also great for me to see this very different way of musicians existing in society. The traditional music is really a family affair and musicians are really integral to weddings which are really the main context where music is heard.”

A very different venue to this Cambridge pub backroom, of course, but the uninhibited joy of how this sound can mutate and be recontextualised is striking, even here. As the duo embark on a series of fervid pieces, the winding riffs become ever more intense and hypnotic, and call to mind a world of other musics as well as their first album, “Wooden Bag”: at one point I found myself thinking of something on Sublime Frequencies, maybe from Thailand? Sun City Girls would certainly be a kind of precursor, even if their delirious planet-straddling hybrids ended up in different places to where 75 Dollar Bill land.

Anyhow, it’s a transporting show, and I’m jealous if any of you are lucky enough to be seeing them at Café Oto in Dalston tonight. Here’s a beautifully-shot set from last October in Paris, to give you an idea of how great this band really are…