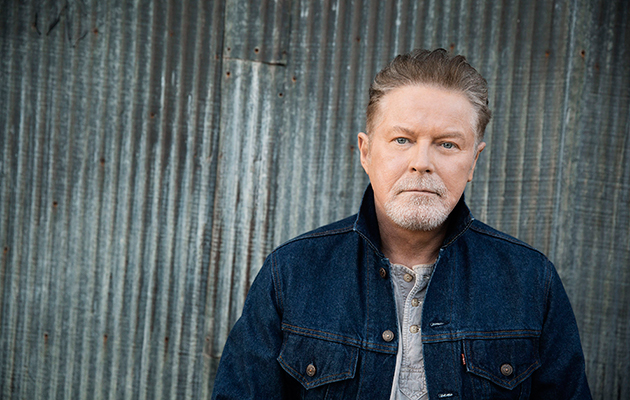 From his start in the bars and clubs of Texas to his big break in California, and the massive success of The Eagles, Don Henley’s has been a magnificent journey. With a new album taking him back to his roots, Don looks back across his diverse, rewarding career. The heroes (Kenny Rogers). The villains (David Geffen). And, of course, the music: “I’m a country boy,” says Don. “If anybody has the right to do a bona fide country album, it’s me.” Words: Andy Gill. Originally published in Uncut’s December 2015 issue (Take 223).

Even the sky is bigger in Texas, a vast blue baize liberally scattered with cotton-wool clouds; while beneath it, the flat, featureless plain extends forever, studded with slender, bulbous water towers like giant map-pins, each bearing the name of the small town it pins to the ground.

This is the kind of landscape that Don Henley grew up in, and to which he returns on his new record, Cass County, a country album that reflects his rural upbringing. We’re 30 or 40 miles outside Austin, passing the water-tower for Hutto, heading to Don’s favourite barbecue joint, just down the road in Taylor, a fading town that seems barely there these days except for the smokey meat at Louis Mueller’s, which keeps drawing the folks in from miles around. It’s in the high nineties at lunchtime, but there’s no air-conditioning here, just a few giant fans that push the smoke around the dark, cavernous barbecue hall. Over the most meltingly tender 12-hour smoked beef ribs you ever could taste, Don chats about his childhood, his hometown, the music that directed the course of his life, his time with the biggest-selling band on the planet, and his return to a notably successful solo career after a 15-year hiatus.

“Ugly buildings, politicians and whores all get respect if they stick around long enough,” Henley observed a couple of nights earlier while filming a show at Austin City Limits, wryly adding, “I don’t know which of those categories I fit into.” It’s an unusually droll, self-deprecating tack for an American star to take, but it fits the new album’s tone of reflective humility, and its mood of wistful regret for decaying values and lost opportunities. Backed by a top-notch band in fanciful Western headgear, it’s a wonderful performance, with the new songs punctuated by highlights from Henley’s solo career, and a succession of gilt-edged guests coming up to share a song, among them Martina McBride and Trisha Yearwood.

Don apologises for his own voice’s slight rustiness, victim to a bronchial complaint; but thanks to the wonders of American pharmaceuticals, he explains – an eyebrow smirkingly raised at his former reputation – he’s able to appear tonight. For “Praying For Rain”, a climate-change song cunningly placed in the mouth of a small farmer, the guests all reassemble alongside Don, to give the song’s title-hook the yearning resonance of a church choir meeting.

The following night, Don’s back at Austin City Limits to record another show, this one for Sirius XM Radio, and followed by a genial Q&A session with the audience. We learn about the first record Don bought (“Hound Dog”), the first big rock show he attended (a Byrds package, though he was more impressed by Mitch Ryder & The Detroit Wheels), and how, as a nine-year-old kid, he wandered backstage at a Lawrence Welk show to find the bandleader with a pair of nun “groupies”. It’s a relaxed journey through the past to his hometown Cass County, a place “where the Old South meets the West”, which Henley is now trying to preserve. He’s funded the renovation of the town’s old courthouse, the latest example of the heritage philanthropy that previously saw him found the Walden Woods Project to protect the area around Thoreau’s cabin from commercial development.

Henley’s a significant contributor to various other charities, and while other celebrity voices may be more politically strident, few are as prepared to put their money where their mouth is. Between 1978 and 2008, Henley was reported as having donated more than $680,000 to the Democratic Party; and with contributions totalling $46,000, he was one of the biggest celebrity donors during the last election campaign. Those political convictions show no sign of slackening just yet.

This, perhaps, is the context in which his patronage of Louis Mueller’s barbecue joint should be viewed: support for a small business with a deeply ingrained heritage, catering to local needs rather than global vested interests. As we prepare to head back to Austin, a waiter hurries out to the car bearing his doggy-bag. Like everything in Texas, it’s bigger than elsewhere, a two-feet-square version of the tinfoil trays from your local Indian takeaway. Supper’s sorted, then.