As you come up the escalator at Leicester Square underground station, you might notice the posters lining the walls advertising Mamma Mia!, Viva Forever! and We Will Rock You. You could be forgiven for wondering what place Dexys have in the heart of West End theatreland, especially here among these big karaoke musicals. 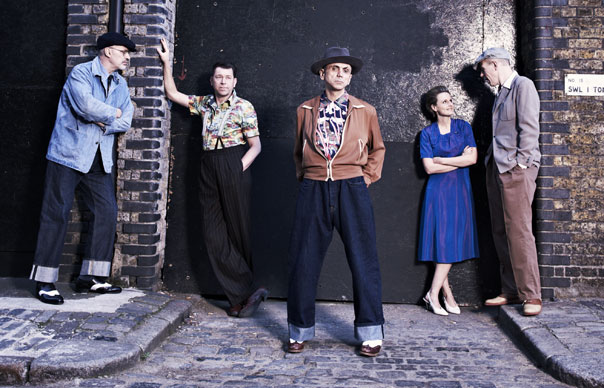 As you come up the escalator at Leicester Square underground station, you might notice the posters lining the walls advertising Mamma Mia!, Viva Forever! and We Will Rock You. You could be forgiven for wondering what place Dexys have in the heart of West End theatreland, especially here among these big karaoke musicals.

But it’s worth remembering that Kevin Rowland has always seemed to relish his band’s underdog status – finding something heroic, I guess, in the ongoing struggle against more orthodox forms of music.

Indeed, his first appearance on Top Of The Pops – February 7, 1980 – found Dexys Midnight Runners sharing a bill with AC/DC and Buggles, while Legs & Co danced to “The Beat Goes On” by Whispers. 33 years on, Rowland continues to remind us that he’s on the outside looking in. He and his band are here for a nine-night residency at London’s Duke of York’s theatre on St Martin’s Lane, sandwiched between David Hare’s play The Judas Kiss and Peter Nichols’ Passion Play, starring Zoë Wanamaker. How on earth did they get in? Did the caretaker forget to lock the doors properly?

Of course, Kevin Rowland has always been one of our most challenging and idiosyncratic musicians. Following the 27 year gap between Don’t Stand Me Down and last year’s One Day I’m Going To Soar (and 13 years since his last solo album, My Beauty), Rowland chose a predictably unconventional route back into the public consciousness. Before One Day I’m Going To Soar was released last June, Rowland and the latest incarnation of Dexys played their as yet-unreleased new album in full and in sequence. Of course, the practise of playing albums in their entirety like this is traditionally reserved for a band revisiting a classic album, not launching a new one. But such is the high-stakes drama of the Dexys narrative – and the sheer confidence in the album’s songs – that it arguably felt like there was no other logical way to do it.

The programme for these run of dates at the Duke of York’s is essentially the same as last year’s shows: One Day I’m Going To Soar followed by a selection of old favourites. But this setting in the 120 year-old venue seems particularly apt for Rowland and his nine co-conspirators, who give full rein to the more theatrical aspects of a Dexys show. If One Day I’m Going To Soar was the latest chapter in Rowland’s ongoing spiritual autobiography, then these narrative-driven confessionals are splendidly – and stylishly – played out. Rowland leads the sartorial charge with, by my reckoning, three costume changes, while his accomplices opt for a kind of 1940s American casual look. The show opens with a piano motif played in darkness before a spot catches Rowland for “Now”, and the first of many, brilliantly acerbic moments of self-examination: “Oh I know that I’ve been crazy and that cannot be denied, but inside of me there’s always been a secret urge to fly”.

The story –boy meets girl, they fall in love, he can’t commit, sad face, the end – is played out in song, and also a series of dialogues between Rowland and Pete Williams, who acts as his foil in the early part of the show, and later, Madeleine Hyland, as the object of Rowland’s lustful attentions. First glimpsed reclining on a chaise lounge above the band, Hyland is a relatively conventional vocal presence compared to Rowland’s rich, swooning soul voice. In essence, she’s a pencil-sketch, a narrative device to get Rowland to the moment of realisation that he is “incape, incape, incapable of love”. All the same, Hyland and Rowland get into a terrific scrap on “I’m Always Going To Love You”, with Hyland, first wooed and now abandoned, snarling at Rowland: “Kevin, don’t talk to me … You saw me as a challenge”.

Despite being absent for great chunks of the set, Williams fares well. His banter with Rowland – however well-rehearsed (and in some cases, stretching back to the early Eighties) – is loose and good humoured. Trombonist Big Jim Paterson, Rowland’s longest serving collaborator, elicits some of the biggest cheers of the night. Rowland himself is terrific. He has a Brando-esque emotional intensity, whether during the stripped down soliloquizing on “Me” or snapping into moments of sudden violence. The big songs – especially the encore – find him turning up the soul power, but I kind of prefer the softer croon he uses for the more introspective songs, in particular a show-stopping “It’s OK John Joe”.

“We couldn’t leave it like that, could we?” says Pete Williams, ushering in a final act of Dexys classics, including a powerful take on “The Waltz”, a mischievous reworking of “Geno”, a jubilant “I Love You (Listen To This)” and a version of “Until I Believe In My Soul” that simply won’t stop. The finale, “This Is What She’s Like”, repurposes the show as rousing soul revue, Rowland at one point leaning over the side of a box, shouting over and over again, “This is our stuff – this, this, this is our stuff.” The stuff of brilliance itself.

Special offer!
For one week only, subscribe to Uncut from only £15.35 and save up to 50%! Don’t miss out on this great offer as it won’t be around for long. Please note, the 50% discount is available to UK Direct Debit subscribers only.