Deep Purple: “We were dangerous, unpredictable… it wasn’t cabaret”

The group take us through their career, album by album 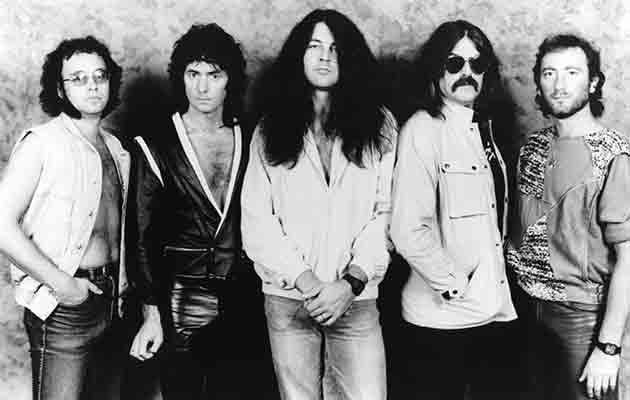 Their magnificent guitarist, Ritchie Blackmore, has long since left the band for a life of quasi-medieval music-making. Their keyboard player, that classically trained gentleman of arts and letters Jon Lord, has lately passed away. And yet, in a band with just one member of the original lineup remaining, there is still in Deep Purple’s music a vibrantly beating heart, their live reputation undiminished by the passing years or the band’s many changes in personnel. Now What!?, their first studio record in eight years, finds them in strong voice: the organ/guitar blueprint that Blackmore and Lord conceived of still in operation, albeit explored by different people. Drummer Ian Paice, singer Ian Gillan and bassist/producer Roger Glover – mainstays of the classic “mark II” lineup – were on hand to talk Uncut through their classic works. Interview: John Robinson. Originally published in Uncut’s June 2013 issue (Take 193).

IAN PAICE: Chris Curtis, the drummer of The Searchers, had an idea of a band like a roundabout – you came on, and after a while you got off. It was all mad, totally mad. But in this madness, he had got together Jon Lord and Ritchie Blackmore, who was a bit of a legend among British musos. The whole first album was written and rehearsed in this crazy old farm called Deeves Hall. We were living there for a couple of months – in the parts of it that weren’t being destroyed by two builders. Through Derek Lawrence there was a record deal in place for a new English band on a US label [Tetragrammaton] set up by Bill Cosby. The first record was recorded in two four-hour sessions. We did four hours in the afternoon, then Derek mixed it in the evening. We came back the next day and did the same thing, and that was it. That was in the old Pye Studios. It did OK in England but it had a lot of push in the US because of this new label. “Hush”, the single, everyone knew, and whatever we did to it, they seemed to like, and it became a big hit. We went over there for our first tour and thought we’d made it – only to discover that it’s not quite that easy.

ROGER GLOVER: It tells us everything that Jon Lord was about – that music has no boundaries.

ROGER GLOVER: Ian Gillan and I had been in the band five or six weeks at this point. In at the deep end? Not half. Not being able to read music, our cue sheets were a sight to behold. We all made our own notes: “Wait for the silly tune, then watch Jon.” That was our entrance.

IAN GILLAN: After the dress rehearsal we went for an Italian meal. I remember Jon saying, “I wonder, dear boy, if you’re going to get around to writing the lyrics before we go onstage?” I duly completed them in the restaurant and had them put up on a music stand on a napkin.

ROGER GLOVER: Our first meeting with the orchestra was at a rehearsal halls. It wasn’t a warm welcome. Malcolm Arnold really gee’d them up, but I can’t tell you what he said.

IAN GILLAN: He said: “You are all playing like a bunch of cunts.” They hated us – there’s so much snobbery in music. I thought, ‘You bunch of arseholes. I’ve seen you on a Tom Jones session with your sandwiches on the floor, reading your Tit-Bits magazine…’

ROGER GLOVER: We put our faith in Malcolm Arnold, and he in us. That was a mark of the man – he was brave, he wasn’t scared of change.