Uncut's other favourite Bob on spies, Scorsese and taking tea with the Taliban 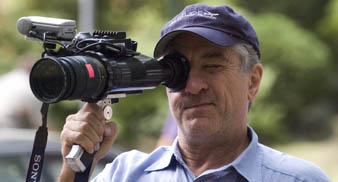 UNCUT: Can you outline how you came to be involved in the film?

DE NIRO: I’ve been trying to get it made for eight years. Then, when 9/11 happened, I thought that was the end of that. But eventually it started up again. The story is a mythology about the CIA. We did a lot of research, but it’s our take on it. The film is a mixture of real events and takeoffs of characters. To be locked into the factual accuracies of those events would be another kind of a movie – you have to make it your own. With Raging Bull, for instance, as much time as I spent with Jake LaMotta, Marty [Scorsese] and I had to make up our own take. Here, the screenplay morphed into different things over the years, but it always had an appeal, all the intelligence stuff, the CIA stuff, the fact it was about an elite group of people, the royalty of our country, all those things had a fascination for me.

There’s lot of star cameos in the film – Joe Pesci, John Turturro, Tim Hutton. Do you think having famous faces popping up frequently can detract from the story?

Well, I picked every actor first and foremost because I felt they were right for the movie. The name value was important, of course, but it was equally important whether they’d work in the story. I spent a lot of time thinking about the casting, reading with people, talking to them before I made it. There were very few actors that I wanted from the beginning, one of them was John Turturro. I wanted him from day one.

How does being an actor yourself affect the choices you make as a director?

I know it’s important to give everybody as much freedom as you can so that they don’t feel there are any limitations. With any mistake they could make, everything is fine. And then they’re not afraid to try things or trust you when you say, ‘Look, let’s try and go in this direction.’ That’s very important with actors – and all other creative elements of the movie, really.

Can you tell us a little bit about your casting choices?

As far as the lead actors go, I would only do the movie if I felt it would be a turn on for me. I’m not going to spend all that time having to deal with actors who don’t get it, or don’t have anything to contribute other than name value. We met Angelina three of tour times, and I could see how much of a connection she felt with the part. I originally had cast Leo [Di Caprio] but the schedule didn’t work out so I had to move on, and fortunately Matt came in.

He plays a very subdued, unshowy character. How did you guide him?
That was the choice Matt made, to play Wilson like that. We both worked on it, and I watched him every step of the way. Matt has a tendency to look at people in a scene, and I’d say it has stronger impact if you don’t look at them. The economy of his physical motion, or whatever you want to call it, was important to us, so I was always on about that, keeping his character in check.

What were your impressions of the CIA before you began working on the film?

The one thing you always hear about the CIA, and the KGB, is that they’re shadowy and ominous, things like that. I’ve met quite a few people in those agencies now, and they’re just people. They have feelings like everybody else! It sounds kind of corny when I say that, but that to me is interesting – what these people do, what they think. What they do in their profession and how it relates to their personal lives. That’s what I tried to do in this movie. I understand intelligence and the need for it. People do it every day – they hear a rumour about somebody. It’s gossip. This is the same thing on a grander scale. It’s necessary evil. But that doesn’t give a license to do things that are unethical.

You went on a fact-finding journey to Afghanistan and Pakistan. What can you tell us about that?

That was an interesting trip! We met one of the commanders of the local Taliban. We had tea with them, and gave them $200 for a woman’s school, which I know they went away and set up. It was very interesting in those tribal areas, because they’re places like no other. It was all very cordial when we met them. Over tea, very friendly. They showed us how they defeated the Russians…

Did you draw any particular influences from directors you’ve worked with in the past?

The director I’ve worked with the most over the years is obviously Marty. We talked, especially in post-production. I showed him the movie a couple of times. Some things you learn from just being in movies, so I see what’s getting done, how it’s getting done. I know what making a film is going to take, how much time. I almost don’t even think about it. If I’m in a movie, I can sense if something’s not quite right, if the rhythm is off.

How do you compare the two processes, of acting and directing?

I like them both. I always wanted to direct. Directing is a lot more of a commitment though, a lot more time. This has been a long-haul process. I like directors who do very few takes, they know what they want. As for me, I know when I have a shot, but I might want back up, and one other take. You never know. If it’s about capturing a moment, you’re never going to be able to go back and repeat it, you go with it. It’s a tricky thing. I go through all the footage, and look at everything.