An interview from the Uncut vaults

As the Croz prepares to release a new solo album – his fourth in five years – and with two solo UK shows imminent, I thought I’d post my interview with him from our October, 2016 issue. It was a candid chat – as you’d hope – covering a lot of ground, from his career resurgence (he was about to release his Lighthouse album) to the health of Joni Mitchell, his relationship at that time with Neil Young and his perspectives on the Desert Trip festival, a Byrds reunion and the death of David Bowie earlier that year… 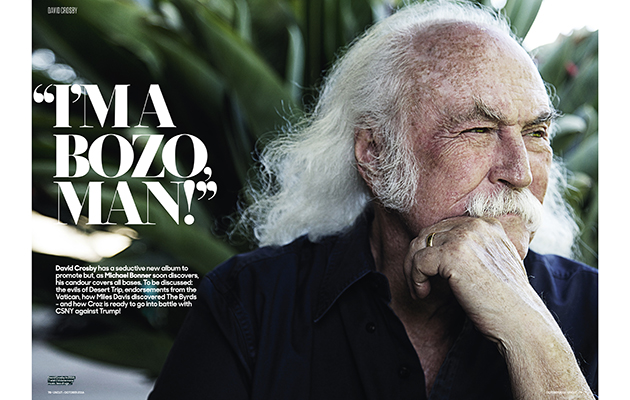 “I’m having a great day, man. I wrote a new song last night. Got it demoed. I’m just a very happy guy.” It is shortly after noon in Santa Ynez, California and David Crosby is in excellent spirits. He has recently recovered from a stomach bug – “I was puking my guts up. Thanks for the visual, Dave!” – but evidently this has done little to dampen his mood. Jovial and wryly self-deprecating, Crosby talks enthusiastically about his current, unprecedented creative streak. Since releasing Croz, his first solo album in 21 years, in early 2014, he has multiple projects in the works. The first of these is Lighthouse, a new LP due in October: historically, his writing it all about space and melody, qualities that are reassuringly abundant on this latest record. Admittedly, Crosby himself is unsure what accounts for this sudden burst of creativity – “The truth is, I don’t fucking know. I wish I did! Usually, when we get to this stage of things, we either get lazy, or we frantically try and have another hit, which is not my MO at all. I’ve never had one!”

Crosby’s current collaborators – including his son, James – are the latest in a long line of musical foils stretching back to Roger McGuinn and Chris Hillman in The Byrds and, later, Stephen Stills, Graham Nash and Neil Young. Recently, his relationship with Nash has soured –his former band mate claimed, “David has ripped the heart out of Crosby, Stills, Nash and Young” – although today Crosby speaks generously about the work they achieved together. He is adamant, too, he would reunite with CSNY during this critical election year to take a spirit-of-’68, anti-Trump message on the road.

It transpires that Crosby has a lot on his mind at the moment. A long-time supporter of the San Francisco scene, he reveals he missed the Grateful Dead’s Fare Thee Well shows last summer – “I was working, but I would have cancelled dates so that I could have gone and sung with them, but they decided they weren’t going to invite other people to sit in.” Crosby celebrates his 75th birthday on August 14 and he is mindful of 2016’s extraordinary death toll, which has claimed several of his friend: “When you get to this stage in life, you lose friends fairly consistently. But I try not to look backwards much. David Bowie would not tell me to miss David Bowie, he would tell me to make some new music.” Then there is the nagging question of a Byrds reunion: “I would be working with Chris and Roger right now if could. That’s not Roger’s choice to do, and if he doesn’t want to do it, I can’t make him do it.”

Despite these thorny matters, though, it’s apparent that Crosby is enjoying a period of extended tranquility in his life. “I’m looking at cows in a pasture,” he says, describing the view from his bedroom window. “I’m a country guy or an ocean guy. I exist in cities OK. In New York, I do quite well, I like it in London and in cities in Europe. I don’t like LA at all, for any reason. No, I live way out in the country. Around me is open, rolling savannah with oaks and grassland. It’s beautiful, very beautiful.”