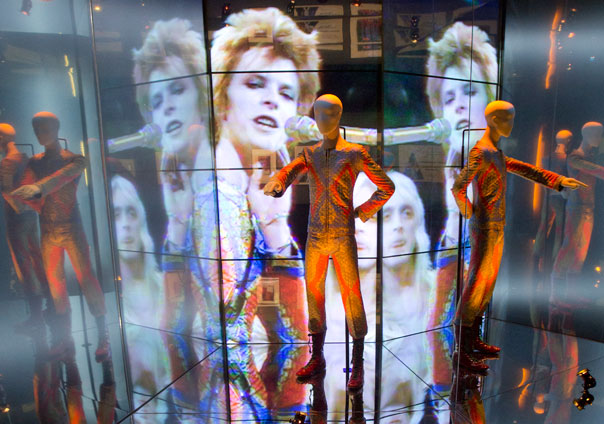 Towards the end of the V&A’s David Bowie Is… exhibition, tucked away on a wall next to the handwritten lyrics for “Heroes” and a postcard from Christopher Isherwood, are a set of door keys that have evidently seen better days. After a fascinating, exhaustive trip through over 60 costumes and 370 objects, including pages of handwritten lyrics, sheet music, diary excerpts, photographs, posters, record sleeves, video installations – the full extent of Bowie’s 40 year plus career, in other words – the one recognizably normal object here is a rather cumbersome set of rusting keys to the apartment at Hauptstraße 155, Shöneberg, Berlin, that Bowie shared in the late 1970s with Iggy Pop. Even rock stars, it seems, need front door keys.

Long before the front door keys, the first thing we see as we enter David Bowie Is… are a pyramid of oranges. This is Pyramid (Soul City), a 1967 installation by South African sculptor Roelof Louw; next to it, on a video screen embedded into the wall, Gilbert & George explain in grainy black and white footage the origins of their Singing Sculpture performance. The curators of David Bowie Is… are clearly conscious of the problems involved in mounting an event about an artist who has lived so vividly in the public eye. As Bowie’s career has been rigorously analysed, dissected, studied and documented, you could be forgiven for wondering exactly what David Bowie Is… plans to offer us that we didn’t already know. But with their surprising opening salvo of Louw and Gilbert & George, they’re telling us: wait, we know, this is something different.

The Louw and Gilbert & George are indicative, too, of something else. Ostensibly, they’re here to help present Bowie – particularly during his early years – in a broader cultural context. Other artifacts from this period include photos of Mick Jagger, the front cover of The Times from Monday, January 6, 1969 showing the first colour photograph of the Earth from outer space, the Japanese poster for 2001: A Space Odyssey, the Sgt Pepper album sleeve and David Pelham’s original cover art for JG Ballard’s novel, The Drowned World. But these also illustrate Bowie’s ability to assimilate external influences and use them to better himself, to propel him beyond Beckenham to the stars. His cultural appetite is ferocious.

Alongside this, we get the first glimpse of the memorabilia from the Bowie archive itself. There’s a letter, dated September 17, 1965, from Bowie’s first manager, Ralph Horton, advising his future manager, Ken Pitt that “I have now changed David’s name to David Bowie.” A poster for a show at the Festival Hall, with Bowie on the bill below Tyrannosaurus Rex, Roy Harper and Stefan Grossman – “vibrations by John Peel” – on Whit-Monday, June 3. There’s sketches, record sleeves, the green striped jacket he wore in the Kon-rads. On a video screen, you can watch the teenage Bowie on television defending his right to have long hair.

To be honest, the sheer volume of objects, installations and displays is pretty overwhelming. In the second room, I realize at one point that I am standing in front of a mannequin wearing the “short bodysuit with rabbit design” Bowie wore on the 1972 Ziggy tour which stands on a giant copy of George Steiner’s In Bluebeard’s Castle next to a Marshall amp with ‘David Bowie is… plagiarism or revolution’ written on it, while above the mannequin’s head 20 or so books are suspended from the roof, including Room At The Top, The Divided Self and The American Way Of Death. Meanwhile, “Jean Genie” in playing on the PA and on the headset we’re given on the way in, Howard Goodall is explaining how Bowie writes songs. I honestly don’t know where to turn.

The trick, I think, is to take your time and not try and do everything. If you want to look at costumes, you can take your pick on everything from the pierrot outfit Bowie wore in the Ashes To Ashes video to a Freddie Buretti suit he wore to the 1975 Grammy awards and so on. Outside the first room, there is no particular sense of chronology. The Screaming Lord Byron costume from Julien Temple’s Jazzin’ For Blue Jean film stands opposite the blue suit he wore in the “Life On Mars?” video.

The memorabilia is, arguably, more rewarding. As a fan, the handwritten lyrics for songs like “Ziggy Stardust” and “Fashion” just bring out the geek in me. Look at his funny little handwriting! But things like the diary excerpts offer us a tantalizing glimpse inside Bowie’s thought processes. One page, from January 30, 1975, begins “some wonderful publishing in Fame, my first co-write with Lennon, a Beatle, about my future”. There is a mileage chart of the first Ziggy tour, neatly written in biro, his proposal for the Beckenham Arts Lab, a set of Brian Eno’s Oblique Strategies cards, the painstakingly detailed lighting plan for the Station To Station tour… It’s hard not to list everything in the show, simply because it’s all fascinating. Even the small area given over to Bowie’s paintings exerts a certain pull: although you probably only need to see his ‘Berlin Landscape With J.O’ (Iggy Pop to you and me) the once. All of this shows a man constantly engaged with the creative process, who is – quite literally – sketching ideas on the back of a packet of Gitanes as he goes. And the deeper you dig, the more rewarding this exhibition is.

The final room is dedicated to the music. On a triptych of giant screens you can watch footage of Bowie in performance. I watched the Top Of The Pops performance of “The Jean Genie” run in full on one screen while Mick Rock’s promo video ran concurrently on the next screen. A reminder that, whatever there is to analyse, dissect, study and document about David Bowie – whatever David Bowie Is… – the songs are chiefly amazing.