First of all, there was the somewhat staggering recent news that Captain Sensible was about to turn 60. Then a few weeks ago, Nick Lowe was 65. And today, it turns out, Dave Edmunds, Nick’s former best mate and partner in Rockpile, is 70. 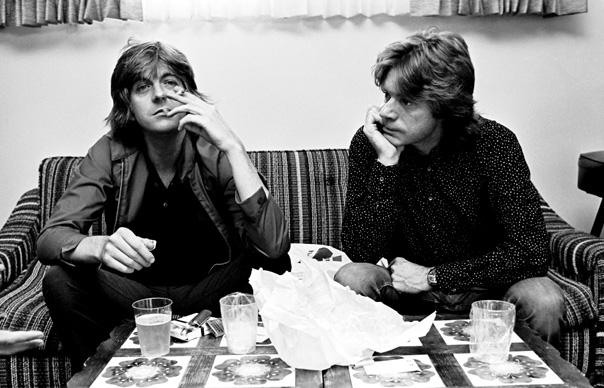 First of all, there was the somewhat staggering recent news that Captain Sensible was about to turn 60. Then a few weeks ago, Nick Lowe was 65. And today, it turns out, Dave Edmunds, Nick’s former best mate and partner in Rockpile, is 70.

Back in what is commonly if sometimes vaguely called ‘the day’, I spent a lot of time with Nick and Dave, much of it involving a fairly spectacular amount of drink and assorted nonsense, all of it hilarious, including a Rockpile tour in 1979, a moment from which is recalled below.


Midnight, in a hotel room in Leicester, thick with cigarette smoke and laughter, several bottles of wine, a couple of them already empty, on a small table besides the bed where Nick Lowe is stretched out, like a garrulous corpse, an ubiquitous Senior Service dangling rakishly from his lips. Dave Edmunds is at the foot of the bed, uncorking another bottle of plonk, and struggling to remember when he first met Nick.

“I can remember meeting you,” Nick, prone to sentimentality in his cups, tells Edmunds. “You were my hero. I was in total awe of you. I remember when I was first in a group and I heard Dave with Love Sculpture on the John Peel show. I thought it was the most fan-fucking-tastic thing I’d ever heard in my life. Dai was my absolute hero.”

“You were, man,” Nick gushes. “I remember one night, the Brinsleys were recording at Rockfield and we’d done a version of a Chuck Berry song. . .”

“You thought it was great, and we really got off on that, because you were such a mystery figure, and you actually mixed that track, and another one, ‘Home In My Hand’. It sounded fantastic. We couldn’t believe it.”

“I don’t even remember it coming out,” Edmunds confesses, a bit baffled.

“Oh,” Nick says, trying to light a fag. “We never released it. We thought, ‘It doesn’t really sound like us.’ And we dumped it.”

Nick pours himself another half pint of wine.

“We didn’t really become friends, though, until I produced that Brinsleys’ album,” Edmunds says, trying to plot a chronological course to the present, which finds Dave back with Nick in Rockpile after a spat on an American tour with Bad Company had seen Nick walking out on the band.

“New Favourites, yeah,” Nick remembers. “But we still weren’t chums. It was only when you moved to London from Rockfield that we started knocking about together.”

“Dai’s problem,” Nick interrupts, “was that he had no real mates. He’d been living in, like, seclusion at Rockfield, never came out of the studio. People were rather in awe of him. There was no one close to him who could say, ‘Look here, Edmunds, old chap, you’re really fucking up your life, pull yourself together, man.’ People were scared to say anything to him.”

“At least you called me up and asked if there was anything you could do to help.”

“Basically, that was because I wanted to learn things from you, Dai,” Nick laughs, spilling his wine and dropping his cigarette on the floor, where it burns a small hole in the carpet. “I was always coming up with things like, ‘’Ere, Dai, you know that handclap sound on that version you did of ‘Needle In A Haystack’? How did you do that?’ And he’d go, ‘Oh, it’s a delay spring, a very short delay spring.’

“And I’d go, ‘Oh, yeah. Of course it is.’ I didn’t know what he was talking about, but the next time I was in the studio pretending to produce someone, I’d turn suddenly to the engineer and say, ‘HEY! Give me some delay spring on this!’ And I’d just sit there and hope to God I hadn’t just made a complete idiot of myself. And the engineer would say, ‘Fine, yeah.’ And sure enough, out would come the same handclap sound.

“I must say,” Nick goes on, “that I basically wasn’t much help at all to Dai. When he was telling me about his divorce and all his endless problems, I was just trying to nick all his fucking ideas.”

“We never had any real plans to work together,” Edmunds says, moving things along, “until I got a deal with SwanSong and we were out drinking, standing at a bar somewhere. . .”

“It was The Nashville, a Graham Parker gig,” Nick suddenly recalls.

“I remember I had a terrible hangover and I said to Nick, ‘I’ve got to make an album, have you got a song for me?’ And he just said, ‘Let’s write one.’ I’d been trying to write songs for years, and I’d never been able to. So we were at the bar of The Nashville, trying to come up with an idea for a song. I said, ‘No one’s written a song about the weekend since Eddie Cochran, let’s do one about the weekend.’ We were at the bar, actually writing it. We went into the dressing room, the quietest place we could find, and Nick scratched it out on the back of a cigarette packet. By the end of Graham’s set, we had ‘Here Comes The Weekend’. I’d been trying for years to write a song, you know, and suddenly I was doing it.”

God knows what time it is by now, but I notice there’s only one bottle of wine left and Nick, very squiffy by now, is pouring most of that into his glass and having a groan about not being what he calls ‘fashionable’, citing criticism of his new album, Labour Of Lust as evidence.

“Nobody thinks I’m hip,” he says, somewhat sorry for himself.

“But it’s true,” Nick blearily laments. “The album was terribly slagged. But who cares?” he asks, trying to put a brave face on things. “The only people who read reviews of my records are the people who write them, me and my mum.”

“Oh, yeah,” Nick laughs bitterly. “It’s crawling up the charts with a fucking anvil around its neck. But I still think I’m streets better than most people making records today. There are all these very serious people trying desperately to look thin. They’re all crap. I mean, whenever I hear Siouxsie And The Banshees, I think, ‘Come back, Curved Air, all is forgiven.’ I’m much better than any of them, whatever anyone else says.”

“That’s telling them, boyo,” Edmunds roars, almost falling off the end of the bed.

“But that’s the point, Nick,” Edmunds says, grappling with Nick for the wine, Nick reluctant to let go of the bottle. “What it all comes down to is this: if you can’t laugh, fuck it. And if you can’t fuck it, laugh.”

Nick looks at Dave, stunned, as if he has just been told one of the secrets of the universe, a truth imparted from the invisible lips of God.