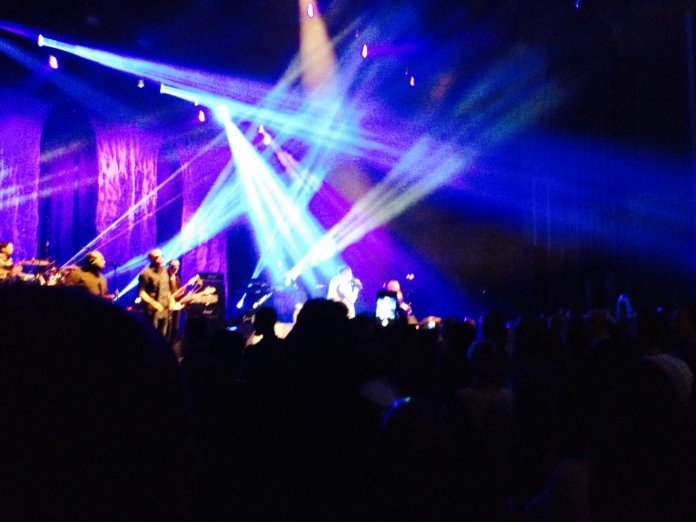 In the aftermath of Bob Dylan‘s speech at the MusiCares charity gala in February, most of the attention focused on his apparent hostility towards Merle Haggard, his enduring prickliness with those who would question the texture and timbre of that indefatigable voice.

At the heart of his 30-minute disquisition, though, was the sort of sentimentality that informed Chronicles, the Theme-Time Radio Hour and, most recently, “Shadows In The Night”; a devotion to the music of his youth that was at once nostalgic and forensic, and appeared deeply informed by a conviction that modern music could never measure up against the towering achievements of the mid-20th Century.

“Very few rock’n’roll bands today play with rhythm. They don’t know what it is,” Dylan claimed, although he gave no indication that he’d actually heard or analysed any of these bands. Not for the first time, it was possible to be touched by Dylan’s scholarly humility to those who went before him, and exasperated by his ignorance of those who came after.

I was thinking about this, though God alone knows why, at some point in the extraordinary show by D’Angelo & The Vanguard on Saturday night. D’Angelo, it should be said straight away, is not remotely indebted to Dylan. But if anyone needed an example of the continuing, evolving potency of rhythm and blues, of how a 21st Century artist can not just channel, but effectively match up against, the achievements of his forefathers, Michael ‘D’Angelo’ Archer works perfectly.

Take “Sugah Daddy”, the last song The Vanguard play in their main set at the Hammersmith Apollo (though it turns out that they will return, soon enough, to continue for the best part of another hour). “Sugah Daddy” is a song from “Black Messiah”, the album that D’Angelo released, with about 24 hours’ notice, near the end of 2014: his third album in 20 years, and his first since the 2000 nu-soul landmark, “Voodoo”.

On record, “Sugah Daddy” is a masterclass in fiendish syncopation, an intricate and infectious song that provides a jazzy spin on the kind of science worked by Prince circa “Kiss”. This is more or less how it begins live, though the fluent urgency of The Vanguard have now accelerated it into something approaching a frenzy. D’Angelo is, initially, sat behind a piano as the groove bends around him, the swinging complexities underpinned by the bass of Pino Palladino, on leave from The Who, positioned to his right.

After a while, D’Angelo emerges from behind the keyboard, bounces his mic stand with the nonchalant grace of James Brown, and begins exhorting his band to faster, harder, higher goals. When the song finishes, he stands silent for what feels like a minute, becalmed after what has been a virtuoso maelstrom. Not for the first time, however, he appears to be toying with the expectations of his audience. He is, in fact, fulfilling the expectations of what the complete R&B bandleader can, and possibly should, do.

“Sugah Daddy”, it transpires, is far from over. First it morphs into a massive JBs groove, with D’Angelo’s creative spar, Kendra Foster and two more backing singers pinballing across the stage while the two star guitarists, Isaiah Sharkey and Jesse Johnson (an early Prince cohort, from Minneapolis veterans The Time) continue to play with phenomenal restraint, sublimated in the nuanced collective effort. Then, after another flamboyant caesura, Cleo ‘Pookie’ Sample generates a theremin-like wail from his keyboards and the whole thing ramps up another notch, into the tight abandon of peak Family Stone.

To those who have followed D’Angelo’s story this past decade or so, the achievements of “Black Messiah” and this supercharged live show are even more remarkable. For most of the 21st Century, D’Angelo has been missing in action, an apparently lost genius, intermittently resurfacing in a cloud of rumour and innuendo; car crashes, substance issues, police scrapes, precious little music. All the time, however, it seems he was working on the songs that would become “Black Messiah” with a team focused around Palladino, Foster, Q-Tip and Ahmir ‘Questlove’ Thompson.

“Black Messiah” sounds like an album that took an insane amount of work to give the impression of effortlessness, and one suspects that D’Angelo would have continued finessing it indefinitely, had not the American political climate, in the wake of the Ferguson and New York shootings, provoked him into action. The context of the album’s release, notwithstanding the Afropunk artwork and a Saturday Night Live performance during which The Vanguard wore “I Can’t Breathe” t-shirts, has slightly overplayed the actual political content of the album. Tonight, it reverberates through the stuttering “1000 Deaths” (Funkadelic’s “Wars Of Armageddon” might be a useful analogue here) and, in particular, the ravishing “The Charade’, a Prince-like psychedelic rock song whose key lines – “All we wanted was a chance to talk/ ‘Stead we only outlined in chalk” – come punctuated with raised fists from The Vanguard.

Mostly, though, there’s a sense that the personal and political, self-expression and community action, partying and protest, are intertwined in a fundamental way which is not always easy to parse. The throb of “1000 Deaths” is sticky, forbidding, and the first sequence of songs pass by in an interlocking rush that has an unexpected urgency and relentlessness. Where D’Angelo appeared still and dignified on Saturday Night Live, it’s a shock to see how he has regained the physicality, the energy, that rippled through sensational gigs around the time of “Voodoo”. “If you’re wondering about the shape I’m in,” he sings in “Back To The Future”, “I hope it ain’t my abdomen that you’re referring to.”

As the show goes on, his aura of command intensifies at the same rate as his showmanship. “One Mo Gin”, in particular, is astonishing, the band falling into a kind of militarised, hyper-alert funk slouch, then gradually being compelled towards a rapturous climax, with D’Angelo’s keen manipulation of soul history moving into the terrain explored so enthusiastically by Marvin Gaye on “Let’s Get It On”.

The performance of “Chicken Grease”, meanwhile, could probably be dissected as an accelerated history of funk grandstanding, compacted into ten or 15 minutes, but which always feels intuitive rather than studied. There are multiple false endings, successful attempts to take it to the bridge, soulclaps, mic stand pivots, priapic yowls, mysterious hand signals to drummer Chris ‘Daddy’ Dave. The instructions reveal the rigorous management that goes into such delirium, and remind that the most freakish auteurs have often been the most unstinting taskmasters.

There’s a danger in all of this that such a depth of cultural knowledge can manifest itself as pastiche, so much so that it can lead one to some preposterous speculations – as when D’Angelo wears a Stars’n’Stripes cape for “The Charade” that appears faded to the same tone as the flag on the cover of “There’s A Riot Goin’ On”. But for all the assiduous study, the show feels more like a kinetic updating of old traditions, one that transcends mere revivalism, with D’Angelo having cast himself emphatically as heir rather than interloper.

He has, critically, classics of his own to spare, none more resonant than the closing “Untitled (How Does It Feel?)”, a song which takes the lubricious tenets of the slow jam and stretches them into something that is immensely calculated, but also moving to the point of absurdity. Tonight, “Untitled” lasts for about 15 minutes, the last seven of which see the band taking rare, microscopic solos and leaving one by one until, finally, D’Angelo is alone at the piano, singing a refrain which he finally hands over to the audience. In keeping with the extraordinary standards of the evening, their performance is subtle and exceptional.

“Times always change,” Bob Dylan noted in that MusiCares speech. “They really do. And you have to always be ready for something that’s coming along and you never expected it.”