When Thom Yorke sneaked out his new solo album a few months back, I managed to hold out for 66 hours before writing a review of "Tomorrow's Modern Boxes". Since waking up early yesterday morning to a lot of very excited Americans on my Twitter timeline, I've been playing D'Angelo's "Black Messiah" many times: another rich and complex album that seems fundamentally ill-suited to any kind of snap judgment reviewing. 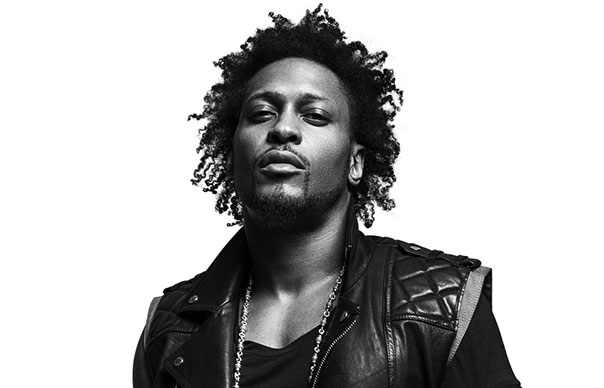 When Thom Yorke sneaked out his new solo album a few months back, I managed to hold out for 66 hours before writing a review of “Tomorrow’s Modern Boxes”. Since waking up early yesterday morning to a lot of very excited Americans on my Twitter timeline, I’ve been playing D’Angelo’s “Black Messiah” many times: another rich and complex album that seems fundamentally ill-suited to any kind of snap judgment reviewing.

D’Angelo was responsible for one of the best live shows I’ve seen in the past 20 years – a performance at Brixton Academy around the release of “Voodoo” that combined extravagant showmanship with a kind of languidly considered soul auteurship. It’s this latter talent that might be key to “Black Messiah”; an album that feels politically timely, but more or less timeless: fundamentally live in feel; unlooped; unprogrammed; meticulously jammed into radical shape. While it might not take all of 14 years to sound as complex but nonchalant as D’Angelo does on, say, “Till It’s Done (Tutu)”, you can tell this isn’t exactly a reactive rush job.

Instinctively, it feels like a wonderful record, not least because of the way some very loose virtuosity – the scratchy Spanish guitar on “Really Love”, for instance, where you can hear D’Angelo’s squeaking on the strings – sits in kinetic, ultra-sophisticated arrangements. The tremors of “1000 Deaths”, with Pino Palladino’s gigantic bass ructions pushed right to the fore, feel very much like an update of both Sly Stone’s dislocated aesthetic circa “There’s A Riot Goin’ On” and, as the guitars rear up, like Funkadelic (the best reference point, it occurs to me now, might be “Wars Of Armageddon”).

I have noble plans to live with “Black Messiah” for a couple of weeks and try and write a different kind of review in the new year; remind me if I don’t get round to doing it. I don’t think there’s anything innately unprofessional or rash in gushing at speed over one of these snap releases – I mean, as a journalist, it’s in my nature to want to tell everyone, as soon as possible, how great “The Charade” is here, and how much it reminds me of the psychedelic density, the saturated sound of Prince on the bridge between “Parade” and “Around The World In A Day”.

But equally, there’s so much here that wants me to listen deeper, to figure out the weird jazz syncopations of “Sugah Daddy”; to pick apart the words that are often, if not buried, then at least partially submerged in the itchy funk matrixes; to go back to “Voodoo” and “Brown Sugar” and understand how D’Angelo got here; to move beyond thinking how, say, “Another Life” reminds me of Curtis Mayfield, and think more about D’Angelo’s exceptionalism, as a soulman who is a critical part of a great tradition rather than merely in thrall to it.

All this may, and probably should, take some time. In the meantime, please give “Black Messiah” a listen, even if you’re a newcomer to D’Angelo’s music, and let me know what you think. So much to enjoy here, and there’s whistling, too.