Courtney Barnett: “I want to be doing stuff forever, I don’t wanna crash and burn”

Uncut joins CB and her band on the European festival circuit 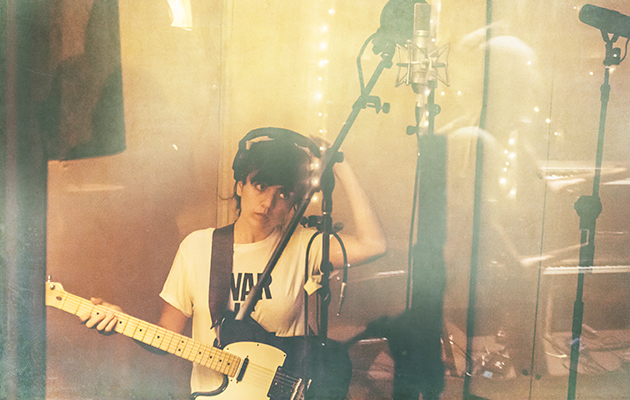 From her base in Melbourne, in two years COURTNEY BARNETT has grown from cottage industry to indie-rock phenomenon, her deadpan observations and spiky guitar playing winning fans from Blur to Jack White. “I think you’ve just got to do what feels right, without compromising your morals,” she says. “Maybe something I’m saying is different somehow.” Words: Tom Pinnock

Courtney Barnett and her band have spent most of the summer in identical portable boxes – the ubiquitous white cabins that are the universal unit of backstage festival accommodation. If her arrangements are much the same from day to day at present, however, they are a far cry from her customary environment in Melbourne, Australia, where for six years she has presided over a cottage industry of self-booked shows and self-released records.

However, since the release in 2013 of her sleepy and witty “A Sea Of Split Peas” double EP, and her follow-up album, the thrashier, but no less wry Sometimes I Sit And Think And Sometimes I Just Sit, word has spread about this deadpan songwriter and her explosive live band. She has been summoned to support Blur at massive shows in America, and while in Nashville recently made a single for Jack White’s Blue Series. For a laconic, supremely laidback individual, she maintains a busy schedule, and hasn’t seen home for months.

“I miss Melbourne, but I don’t pine for it,” Barnett says. “I’ll be home soon. I try to just kind of live in the moment and do what’s happening now, so that I don’t stress out about stuff too much. It’s human nature, everyone goes mental [on tour]. Everything feels multiplied by five, all the emotions and all the adrenaline, so tiny little things send people crazy. After a month, you go to weird head-spaces.”

Uncut follows Barnett and her band – “the CB3” – for a few days at European festivals, and promotional commitments, playing for Belgian and Dutch TV. While band members Bones Sloane (bass) and Dan Mudie (drums) relax, Barnett handles the business duties. Just as impressively, she still calls all the shots. Even her Jack White-produced single is a collaboration between Third Man, Aussie indie Remote Control and her own label, Milk!.

“Milk!’s kind of like an art project,” she explains in her cabin later on. “We just decide what wacky thing we wanna do and work towards it with the hope of making enough money to make another thing happen. It’s nice to be able to work that way without thinking of how much cash you can make.

“I met [Dischord founder, Fugazi guitarist] Ian MacKaye recently in DC. I just totally admire his whole fucking approach to life and music and everything. It’s kind of cool to be discovering someone like him and all of his bands and his label now. That general vicinity of the music industry is the corner that I would prefer to be in, which I think is what I was aiming for when I started Milk!, just to be able to do things on my own terms. Not to be like some rogue cowboy, just ’cos I just want to make music without all the shit that people tag along with it.”

Another big inspiration for Barnett is Patti Smith – although, again, perhaps as much for her approach to her art and her career than her music. Barnett has just covered Smith’s debut, Horses, live in Sydney with her partner, musician Jen Cloher, and some friends, tackling two songs each. “It’s a really challenging album. But you’ve got to challenge yourself in life or you don’t get anywhere. I try to constantly push myself a little outside my comfort zone, or I’d just stay in my room and be depressed. So I have to keep trying to grow as a person.”