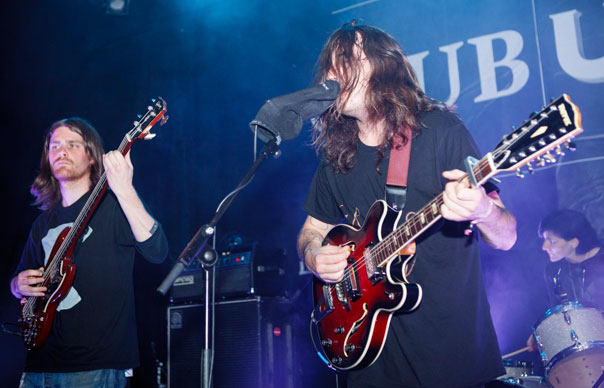 But first there is C Joynes – a Cambridge fingerpicker with a tasty line in American primitivism. Obviously influenced by the likes of John Fahey in his country-blues leanings, as well as the worldlier styles of Sir Richard Bishop, Joynes turns his open-tuned, small-bodied acoustic to a variety of beautifully unexpected melodic twists.

Heavenly’s latest alt-rock hopes, Charlie Boyer & The Voyeurs, are next. Topped with distorted organ (far too quiet in the mix tonight) and with a certain studied streetwise cool, Boyer and the Voyeurs sound as if they were nurtured on the New York proto-punk of the Modern Lovers, Television and Patti Smith. Or perhaps just the ‘greatest hits’ of these acts, as the Voyeurs seem to excise Jonathan Richman’s geeky wit, Television’s twin guitar expositions and Smith’s Beat poet pretensions from their sound.

Not to say the Voyeurs don’t have their (simpler) charms, though – debut album title track “Clarietta” is a jagged and supremely catchy gem, and B-side “Be Nice” is an enjoyable Bolan boogie – just that their ’70s NYC sound is buffed to a glossy perfection, without any of the more unpalatable elements of their forebears.

They end with debut single “I Watch You”, undoubtedly their finest work so far, a chugging cousin of Richman’s “Roadrunner” that ends with a duel between guitar and organ. Perhaps one day they can capture its magic for all their songs.

Allah-Las follow, and seem to turn the Dome Studio Theatre into a Californian high school dance circa 1965. Their retro beat-group sound is a perfect pastiche – surf groups, early Love and The Byrds, and Nuggets – imbued with an instantly charming passion; the masterful period-perfect sound of their self-titled debut is also still intact onstage, conjured by spring reverb and deadened bass.

Their slowest songs are perhaps the most successful tonight – “Catamaran” is enhanced by copious use of maracas, surfy instrumental “Sacred Sands” is sprinkled with beautifully Byrds-y chiming guitars, and on the bluesy, Animals-esque closer, drummer Matt Correia takes a turn at lead vocals.

Mikal Cronin is best known as Ty Segall’s bassist, but in 2010 he released an excellent lo-fi debut, which took a more melodic and Beatles-y tack than many of his contemporaries in the San Francisco garage-rock scene. His new album, MCII, is a much slicker powerpop record, but tonight the raw, energetic sound of his four-piece backing band turns both sets of songs into something much heavier and aggressive, though constantly sweetened by the musicians’ cooing harmonies.

Unlike most people promoting new albums, there’s a nice mix of songs from the two records, Cronin – playing a 12-string semi-acoustic throughout – starting the set with the crashing “Is It Alright” (sadly without the manic flute solo from the record) and swiftly moving through other highlights from his debut, including “Apathy” and “Get Along”. The tracks from the more conventional MCII, including the thumping “Am I Wrong” and the loping “See It My Way”, are transformed into ultra-distorted, guitar-heavy workouts, partly due to the explosive drumming of Ty Segall Band member Emily Rose Epstein.

My personal favourite from Cronin’s debut, “Green And Blue”, is finally deployed near the end of the set, enhanced by sawing violin and ending in a hail of feedback and fuzz. On the evidence of tonight, Cronin’s greatest days are perhaps still ahead.