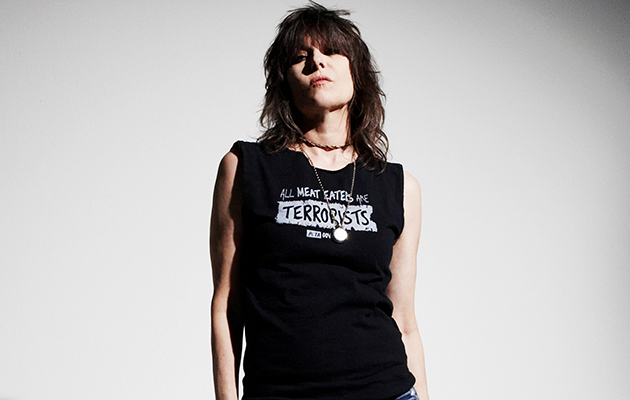 “In many ways, we’re living in enlightened times,” says Chrissie Hynde. Tom Pinnock enjoys an audience with an indefatigable rock icon, as Hynde addresses the storied history of The Pretenders, her intimate tea parties with Morrissey and Victoria Wood, and the ideal candidate to battle Donald Trump… Pamela Anderson!

“We’re in what I call the ‘end of an era’ era for music,” says Chrissie Hynde, as soon as we sit down in the subterranean bar of a west London hotel. “I love it, because I like change and I thrive on surprises. For the past 15 years, I started to think, ‘Well, it’s over for bands’, and that was depressing because I love bands. But I don’t care anymore – I’ve been reeling, and now I’m sitting back waiting for the show to start.”

Since her teenage days in Akron, Ohio, right through The Pretenders to the present day, Hynde has been first and foremost a rock fan. In her 2015 memoir, Reckless, she writes evocatively of seeing the Stooges, Tim Buckley and David Bowie live in their prime, and she’s still not lost the magic of those experiences. “My heroes would never let me down, they never have,” she explains. “I’ve never been disappointed by any of them. There’s no music I liked as a teenager that I can’t stand by now.”

After her first solo album, 2014’s Stockholm, Hynde resurrected The Pretenders last year with Alone, a vigorous, guitar-heavy collection produced in Nashville by The Black Keys’ Dan Auerbach. This return to the band format suits her – “I’ve always stayed exactly the same,” she tells Uncut – and now she’s back in her element, her diary filled up with tour dates.

“Most people find moving very stressful. People say to me, ‘You must be glad to be off tour, now you can relax.’ Well, I can relax much more when I’m on tour. You’re lucky if you find something that makes you feel like yourself, that’s the one time that you feel like you know who you are. Most people are struggling to find that out all the time.”

Over a bottle of sparkling water, Hynde also reveals all about The Pretenders’ return, fighting the establishment’s Grammy culture, dining with Morrissey and Victoria Wood, and her memories of punk, all told in her rapid-fire delivery. She only pauses for breath when talk turns to James Honeyman-Scott, The Pretenders’ first guitarist and the man who created their sound with Hynde before his death aged 25. “When I see lists of greatest guitar players and he’s not in it, for me it’s like a kick in the teeth to him. So I try to fly the Honeyman-Scott flag, always.”

There’s little that Hynde doesn’t cover this January afternoon, from vegetarianism to the pleasures of a solitary lifestyle, and she even discusses the march of Trump and Brexit. “These last few years, people are saying, ‘Oh, everything’s so shit, politically it’s all so bad, the environment’s fucked’, but I urge people to remember that it’s always been bad. People say, ‘Let’s bring back the values…’ Well, the values weren’t that good 200 years ago, they were hanging people for being black. It’s been a pretty rough ride for the human race. The memory of it is a lot better than the actuality of it, I think. In many ways, we’re living in enlightened times.”

A pressing interest closer to home for the singer is finishing the latest pick for her book club, Days Without End by Sebastian Barry. “I’m always behind in my books,” she laughs. “I’ve got two weeks left on this. Last time I picked, I chose The Zone Of Interest by Martin Amis. I think it’s his masterpiece. I don’t always finish the books – everyone else is more academic in the club, but because I was a dropout, I don’t mind failing. I never have. If I don’t enjoy a book, I can’t read it anyway. I can’t force myself to do anything I don’t wanna do, really. I never have.”