A bustle in your hedgerow: The Moon And The Sledgehammer, Penda’s Fen and Akenfield reviewed

Locating the pagan spirit of Albion in some current DVD releases 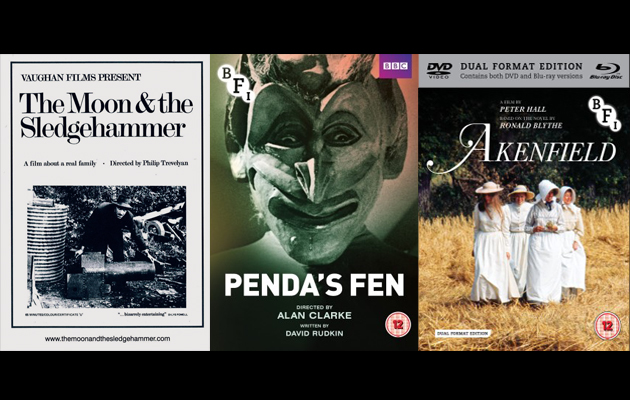 In 1969, the filmmaker Philip Trevelyan was introduced to the Page family. The father – a widower known locally as “Oily Page” – had worked in aircraft engineering but at the time Trevelyan met him, lived with his four grown-up children in a wood in Sussex, without electricity or running water.

The Pages became the subject of Trevelyan’s documentary, The Moon And The Sledgehammer, released in 1971, and has since quietly assumed cult status. An influence on filmmakers ranging from Nick Broomfield and Andrew Kotting, Trevelyan’s film has finally been restored and given a full release on DVD, overseen by Katy MacMillan, former wife of producer Jimmy Vaughn.

This new edition of The Moon And The Sledgehammer coincides with the BFI’s release of Alan Clarke’s Penda’s Fen and Peter Hall’s Akenfield (1973). Although in many respects markedly different films, they are all connected – however loosely – to a broader seam in literature, TV and film running through the Sixties and Seventies, knotted around the edgelands of Britain: places saturated in folk memory, Arthurian magic, Gaia myths and the occult history of Britain. To this list you could also add films including The Wicker Man, Blood On Satan’s Claw, Winstanley and Requiem For A Village, assorted Earth-set Doctor Who stories (The Daemons, particularly), The Changes, Children Of The Stones and books ranging from Alan Garner’s The Weirdstone Of Brisingamen and Susan Cooper’s The Dark Is Rising series to Richard Mabey’s The Unofficial Countryside.

Penda’s Fen is essentially a quasi-pagan fiction invoking the spirits of dead kings and composers to present a vision of an alternative England, first broadcast as part of the BBC’s Play For Today series. A layered, radical piece, it incorporates teenage sexuality and folk horror alongside complex theological and political concepts. Based on Ronald Blythe’s oral history, Akenfield chronicled the changing character and rhythms of a Suffolk village, with Hall using non-professional actors drawn from nearby communities. Many of these people are struggling to cope with the most dramatic changes to face agricultural communities for generations; and it is at this same transitional moment that Trevelyan finds the Pages.

But while the residents of Akenfield make do and mend, to the best of their abilities, the septuagenarian Page and his children have chosen to adopt a self-sufficient life isolated from the perils of the modern age in their ramshackle home in the woods. There are occasional forays into the modern world – in one scene, Trevelyan’s camera follows the slow passage of the family’s traction engine past Hayward’s Heath train station. “Steam will come back in,” says Peter, the eldest son. His younger brother, Jim, meanwhile, views evolutionary theories with suspicion and – in one of the film’s most uncomfortable scenes – appears to court his sister, Kath, with a bunch of flowers. “You are my garden of roses, kissed by the morning dew,” he tells her.

Old man Page himself is quite the thesp, emerging from the woods like an arthritic Pan to dispense twinkly-eyed hedgerow wisdom: “I never go where the cock never crows and I wouldn’t advise any of you to go where the cock don’t crow.” But although Page and his family are at least in charge of their own destinies, unburdened by deadlines or the 9 – 5 grind – contented amid the rusty iron carcasses that litter their yard – you might wonder whether their values and eccentricities have greater of less resonance in today’s world.