In case we need reminding, the last time Bruce Springsteen played Hard Rock Calling – at Hyde Park, last July – a curfew was broken, the PA switched off, and Springsteen and a guesting Paul McCartney were silenced mid-song. It seems unlikely there would be a repeat of such shenanigans this year. 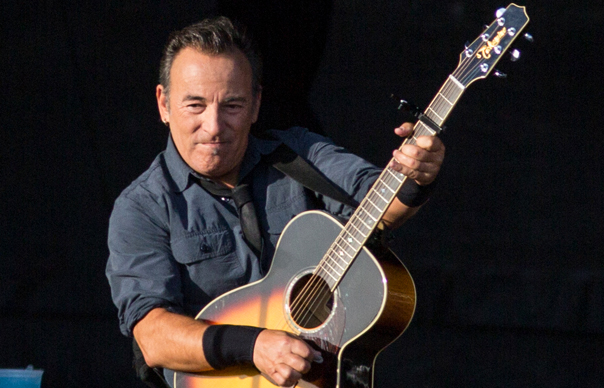 In case we need reminding, the last time Bruce Springsteen played Hard Rock Calling – at Hyde Park, last July – a curfew was broken, the PA switched off, and Springsteen and a guesting Paul McCartney were silenced mid-song. It seems unlikely there would be a repeat of such shenanigans this year.

For starters, Hard Rock Calling have left leafy Hyde Park and relocated a site that resembles a car park some yomping distance from the Olympic stadium. The only signs of habitation are rows and rows of empty, new-build apartment blocks stacked up along one side of the festival perimeter. With no nearby residents to grumble about noise levels the sound, at least, is loud and clear. The main arena is concreted, with a covering of Astroturf in the middle. A short distance away, in a grassy, landscaped area of gently rolling hills and dips that recalls Teletubbyland, you might catch The Flaming Groovies tearing through a ferocious version of “Shake Some Action” in the dusty afternoon heat.

Meanwhile, across on the main stage, Alabama Shakes are in full throttle, delivering among many terrific moments an amazing version of “Hold On” that, even at 3pm in a half-empty area, carries a formidable punch. They’re followed by The Black Crowes, who conjure up an hour’s worth of loose, digressive jams culminating in a terrific take on “Hard To Handle” which spins off into “Hush” half way through. Highlights? Plenty, but Adam MacDougall enveloped in a cloud of smoke essaying some rambling keyboard choogle, the overheard camera shots of the Persian rugs the band play on, or a glimpse of Rich Robinson’s guitar pedals, emblazoned with the words “Hippy Machine”, all figure highly.

Bruce Springsteen And The E Street Band arrive just after 7pm, and play for a little over 3 hours. In many ways, it’s a curious set – although I admit I’m struggling to work out what this current European leg of the Wrecking Ball tour is about. This tour has been on the road for 15 months now – twice the length of the previous Working On A Dream tour, which ran from April to November 2009. It’s a stretch to think that he’s still in a promotion cycle for the album – out of tonight’s 29 songs, only four are from Wrecking Ball itself. Certainly, the rump of material from the early part of the set comes from Nebraska – including a terrific “Reasons To Believe” recast as Canned Heat-style boogie, and a fiery take on “Atlantic City”. So what is he doing? He starts taking audience requests conspicuously early on in the show – the fourth and fifth songs played, “Johnny 99” and “Reasons To Believe”, come from placards held up by the audience. You might wonder if there’s actually any shape to these shows, or if Springsteen and the band are simply turning up, walking on stage and seeing what happens.

But the thing about this run of dates so far has been full album performances – which Springsteen has been doing since the closing stages of the Working For A Dream tour in America, but not elsewhere. In fact, out of the 21 shows he’s played so far in this run, nine have included full album performances of either Born To Run (twice), Darkness On The Edge Of Town (three times) or Born In The USA (four times). Tonight, we get Born In The USA – which he also played the previous night in Paris.

Arguably, Born In The USA feels as resonant today as it did when it was released in 1984 – the hardships endured by servicemen returning from war, a bleak recessionary landscape, government mismanagement, corporate greed. It also affords a number of rousing sing-along moments – the title track, “No Surrender”, “Glory Days” – which work tremendously well in the convivial atmosphere of a Springsteen show. Even the unsettling, predatory “I’m On Fire” assumes an unexpected celebratory tone tonight.

I guess this batch of dates has an element of “this one’s for the fans”. We are used to seeing Springsteen in a number of different guises – the preacher, the polemicist, or increasingly playing up to the band’s advancing age. But tonight the vibe seems very much about playing for the simple pleasure of it. During The Rising’s “Waitin’ On A Sunny Day”, Springsteen raised onto his shoulders a young crowd member to sing onstage. The audience cheers whenever Jake Clemons plays a solo. A number of Nils Lofgren-style black pork pie hats are in evidence. This is Bruce conducting what amounts to a backyard sing-along round the barbecue, but on a far grander scale. We are in his extended family, everyone’s invited.

He closes the show with an acoustic “My Lucky Day” from Working On A Dream. An unusual choice – no “Thunder Road”, or “Twist And Shout”, which have been the most frequent closing songs played on this leg of the tour. Apparently, he decided to play it on a whim, after seeing an audience member with a tattoo. “That’s a nice tattoo you’ve got there,” he says. “That’s worth a spontaneous song on its own. I run into people all over the place with tattoos. I don’t have one myself but I appreciate them on other people. Anyway, this one’s for you, kid.” As good a reason as any, presumably.