Uncut presents an exclusive track by track review of his new album. 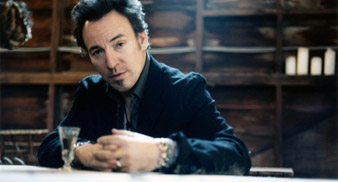 Every decade or so, Bruce Springsteen feels the urge to make a stripped-down roots album. It started in the ’80s with Nebraska. Then in the ’90s it was The Ghost Of Tom Joad. Now comes the third in the sequence with Devils & Dust, due for release on April 25. Laden with folk and country influences, many of the songs on the new album were written during the solo tour that followed the release of Tom Joad in 1995/96.

“I wrote a lot of this music after those shows, when I’d go back to my hotel room,” Springsteen has said. “I still had my voice, because I hadn’t sung over a rock band all night. So I’d go home and make up my stories.”

The acoustic songs he’d accumulated were then set aside for an E Street Band reunion tour in 1999 and further delayed when the intervention of Osama Bin Laden compelled him to respond with 2002’s The Rising. It’s a history that gives Devils & Dust something of a time-warp feel, with many of the dozen compositions harking back to a pre-9/11 America and Springsteen singing about mothers and fathers, sons and lovers in a world in which global apocalypse takes a back seat to the everyman themes of faith, trust, dreams, hopes and fears – both lost and found.

“All the songs are about people whose souls are in danger or at risk. They all have something eating at them. Some come through successfully and some come to a tragic end,” Springsteen says of the album’s dozen compositions in a 30 minute DVD film that will accompany all copies of the CD. The film, directed by Danny Clinch and shot in New Jersey in February 2005, also features full-length solo acoustic performances of six of the songs on the album – “Devils & Dust”, “Reno”, “Long Time Comin’”, “All I’m Thinkin’ About” and “Matamaros Banks”.

The album was recorded at Thrill Hill studios in Los Angeles and at home in New Jersey and produced by Brendan O’Brien, who also helmed The Rising. Musicians on the album include O’Brien on bass, Steve Jordan on drums and recent E Street Band addition Soozie Tyrell on fiddle, with further orchestration by the Nashville String Machine.

Springsteen will play London’s Albert Hall on May 27/28, promising a solo set that will will focus on the new album, along with material from Nebraska and The Ghost Of Tom Joad, plus stripped-down takes on songs from The Rising.

Here, Uncut.co.uk exclusively offers a track-by-track preview of the album.

Devils & Dust
Starts of with just an acoustic guitar and gradually builds with the introduction of piano and strings into something more epic, while the line ‘we’ve got God on our side’ and a wheezing harmonica create a Dylanesque atmosphere. One of the few post 9/11 songs on the album, according to Springsteen it was written from the perspective of an American solider in Iraq : “What if what you do to survive/kills the things you love?”

All The Way Home
The oldest song on the album, written by Springsteen 15 years ago for a 1991 Southside Johnny album. The closest thing to a rocker on the album, albeit one that shuffles rather than explodes, with a hedonistic lyric about picking up a girl in a bar to a soundtrack of “some old Stones’ song the band is trashin’.”

Long Time Comin’
A delicious country romp and an infectious love song about a pair of lovers expecting their first child : “Lay my hands across your belly and feel another one kickin’ inside/I ain’t gonna fuck it up this time.”

Black Cowboys
Led by a plaintive piano part, one of the densest narrative songs Springsteen has every written – five wordy verses with no chorus about the rite-of-passage of one Rainey Williams, growing up in the ghetto but obsessed with watching old westerns on daytime TV.

Maria’s Bed
A carnal lyric about a typical blue-collar Sprinsgteen hero (“Been in a barbed wire highway 40 days and nights/I ain’t complain’n, that’s my job and it suits me right”) set to an infectious, freewhelin’ country stomp, complete with mandolin, dobro and fiddle.

Silver Palomino
Springsteen exchanges four wheels for four legs on a romantic Tex-Mex-tinged border ballad about a boy’s love for his horse – and so much more.

Jesus Was An Only Son
Swelling organ, piano and backing chorus with a subtle gospel feel and a biblical lyric with references to Calvary Hill, Nazareth and Gethsemane.

Leah
Written before or after 9/11? It could be either. Mexican-sounding trumpet, lovely backing vocals and an insistent rhythm support a lyric of idealistic aspiration: “I wanna build me a house on higher ground/I wanna find me a world where love’s the only sound.”

The Hitter
Perhaps the album’s most powerful narrative. With extraordinary empathy Springsteen tells the tale of a crooked boxer who’s tasted success and then fallen on bad times against a potent but simple acoustic guitar
accompaniment.

All I’m Thinkin’ About
Even a roots-based Springsteen album wouldn’t be complete without at least one song about automobiles. A celebratory love song with a lyric populated by flat bed Fords and black cars shinin’ and which rides buoyantly over an exuberant tune rendered as a jug band stomp with joyous falsetto vocal.

Matamaros Banks
A moody lament for a dead lover with a tune that sounds like it was borrowed from an ancient old folk ballad closes the album on a sombre note.