Damon Albarn and co return for first album in 12 years

When Blur reformed in 2009, did we necessarily think they were going to record a new album? Evidently, these are busy men with active careers: solo albums, light operas, political campaigns, radio shows, artisanal cheese ranges for mid-price supermarkets. But although there were two warmly received singles – “Fool’s Day” and “Under The Westway” – that demonstrated they had lost none of their talents for writing leftfield pop songs, Blur seemed destined to roll themselves out only during times of collected high spirits: summer festivals, award ceremonies and international sporting events.

So what changed? During May, 2013, Blur spent five days in Hong Kong following cancelled shows in Japan and Taiwan. There, they bedded down at the city’s Avon Studios for some no-strings exploratory jams. These recordings gestated until autumn 2014, when Graham Coxon – in cahoots with the band’s early producer, Stephen Street – decided to fine-tune the material. For his part, Coxon specifically sees his work on The Magic Whip as part of a healing process begun when he rejoined the band in 2009.

The idea of Coxon completing some kind of perceived reparations by assiduously shaping and editing the Hong Kong sessions into Blur’s first new studio album in 12 years makes for a persuasive narrative. But while that may suggest The Magic Whip is a stylistically closer to either Coxon’s own solo releases or the last Blur album to conspicuously foreground his talents – 1997’s Blur – the vibes here are very much about looking forward. Admittedly, there are a couple of songs – “Lonesome Street” and “Go Out” – which explicitly revisit the ‘la la la’ chorus and twitchy guitar rhythms of 20th century Blur, along with what feel like passing nods to “Music is My Radar” or “This Is A Low”. 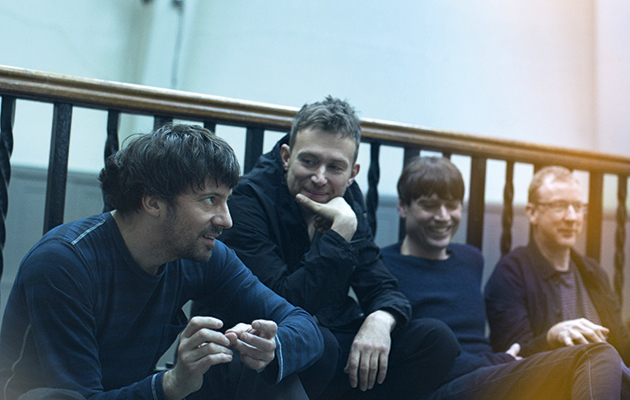 At its best, The Magic Whip thrums with ideas and possibilities. Palpably, Hong Kong provided a fresh context for many of Albarn’s recurrent themes. Isolation and the depersonalising qualities of modern living weave through the album’s 12 songs, continuing themes explored previously in Blur songs like “Yuko And Hiro” and his own “Everyday Robots”. Songs on The Magic Whip mention internet hotspots, satellite showers, industrial light and glass arcades. In one track, you are required to “log in your name”. Elsewhere, he sings excitedly of his admiration for “the airspace of another city / It’s got your number and your blood type”. As much as The Good, The Bad And The Queen was a melancholy love letter to London, so The Magic Whip depicts a bustling modern city where old cultures and emerging technologies exist cheek-by-jowl. As the album’s sleevenotes comment, “Essex dreams are far way”. Well, quite.

Albarn returned to Hong Kong in December last year to help shape his lyrics for this album. On his way back to England after solo shows in Australia he revisited many locations and journeys connected to the band’s May 2013 sessions; a gweilo adrift in a city of 7 million. The album’s opener, “Lonesome Street”, finds Albarn alive to the bustle of Hong Kong – “you have to go on the underground to get things done here”. Musically, it feels a little like a reassuring sop to anxious fans; one of those rowdy numbers like “Stereotypes”, complete with whistling and some “oo-oooh”s. “New World Towers” recalls the dubby, spectral airs of The Good, The Bad & The Queen or Everyday Robots, while Albarn sings about “green neon… carved out of grey white skies”, his wistful tone beautifully complimented by Coxon’s warm guitar playing. Like “Lonesome Street”, “Go Out” – first previewed in February – retains the snotty post-punk tension of Blur’s mid-90s incarnation, driven by choppy guitars and a jerky bass line. It ends in a nicely distorted solo from Coxon. “Ice Cream Man”, meanwhile, arrives on loping, acoustic melodies and strange electronic burblings; it builds around a simple chord progression that hangs unobtrusively around Alex James’s basslines. Albarn, meanwhile, appears to conjure up a faintly supernatural yarn about the title character, “with a swish of his magic whip, all the people in the party froze”.

Among the album’s highlights, “Thought I Was A Spaceman” signals a shift in the band’s ambitions. At over six minutes long, it arrives swathed in icy keyboard washes, a nagging xylophone melody and programmed drums across which drift Albarn’s hushed, treated vocals. About two and a half minutes in, though, the song lifts off on shimmering Mellotron lines and Dave Rowntree’s propulsive drums. Evoking images of climate change – “the desert had encroached upon the places were we lived” – it’s elegant and sweeping in stature; vaguely reminiscent of Bowie’s track “Slip Away” (from Heathen), though entirely its own beast. The rowdy “I Broadcast” finds an adrenalized Albarn “buzzing on another day”. It’s followed by “My Terracotta Heart”, one of the album’s dazzling sad songs. Against a clanking, whirring drumbeat and gentle guitar filigrees, Albarn’s tone is regretful and nostalgic: “I’m running out of heart here / Just sitting out the constant doubt in my head / But I don’t know what it is”. Albarn can write songs like this in his sleep; but that doesn’t diminish their emotive pull. For its part, the impressive “There Are Too Many Of Us” is ushered in on martial-sounding strings, building on waves of keyboard and swirling Mellotron effects.

Click hear to read the making of The Magic Whip…

The final quarter of the album finds a happy congruence between chipper Blur (“Ghost Ship”, “Ong Ong”) and sad Damon (“Pyongyang”, “Mirrorball”). Bobbing along on crisp, summer guitars and a relaxed saxophone refrain, “Ghost Ship” curiously resembles the dubby chill-out grooves of Nightmares On Wax, with Albarn singing “I need a lantern in you to shine out bright rays”. There’s a gulf between its light, bouncy tone and the implausibly beautiful “Pyongyang”. Although its lyrics are elusive, it finds Albarn’s narrator contemplating separation, absence and the passage of time – “By the time your sun is rising there / Out here it’s turning blue” – against an elegiac backing of gently cascading guitar notes and sparkling keyboard motes. It’s a sharp contrast with the singalong “Ong Ong”, with its Faces stomp and beery chorus, “I wanna be with you”. There are even some “sha la las”. Things end in dignified fashion with “Mirrorball”, which arrives in the same woozy atmospherics as “Miss America”. It appears to find Albarn travelling from Jordan Road on the Hong Kong metro system to the Ocean Park theme park; “before you log out, hold close to me” he murmurs. Sighing Oriental strings swish around Coxon’s plaintive guitar; the tone is intimate, ruminative. As Coxon’s final guitar note fades at the song’s close, Albarn sings one last, “Hold close to me”. You might wonder whether he’s addressing his formerly estranged best friend. Or, perhaps, even contemplating a new future for Blur.