With an exclusive foreword by Tony Visconti 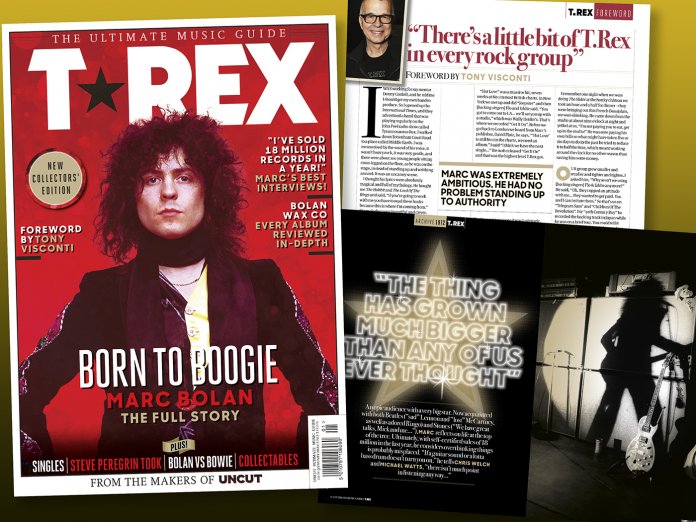 BUY A COPY OF THE T.REX ULTIMATE MUSIC GUIDE NOW!

If we can pinpoint a big bang event for glam rock, it’s the Atomic Sunrise festival at London’s Roundhouse in March, 1970. On stage, David Bowie was presenting a new and costumed band, The Hype. In front of it, his friend Marc Bolan was experiencing something of a eureka moment. As John Cambridge, The Hype’s drummer later recalled, he was likely thinking: “I’ll have a bit of that…”

On stage with Bowie that night was a person that both Bowie and Bolan had in common: Tony Visconti. A gifted arranger and record producer, Visconti was involved in the careers of both men, but at that moment had the longer association with Bolan, having produced Tyrannosaurus Rex since 1968. As Tony recalls for us in his exclusive foreword to the latest Ultimate Music Guide, Marc was determined to get somewhere.

“Marc was extremely ambitious, to the point of being ruthless,” writes Tony. “He had these two people inside of him, a really hardcore businessperson and a dreamy writer of fantasy pop.”

In this latest Ultimate Music Guide, you can read in-depth reviews of every album, and hear how Marc Bolan fulfilled his ambition, and made a musical virtue out his contradictions: mod/hippy; acoustic/electric; sense/nonsense. If Bowie nested the golden glam egg, it was Bolan and T.Rex who hatched it – and once Marc was at the top, he loved every minute of his stardom.

A gift to the press (and to us now), here you can read how entertaining (and occasionally catty, and defensive) he could be, in a selection of his best interviews. “Surely,” he asks NME’s Nick Logan rhetorically, “it is funkier for you to interview me, someone who has something to say?”

As we enter the 50th anniversary of “T Rextasy”, the moment at which Marc caught the public imagination and set it sparkling, it is funky still. “There’s a little bit of T.Rex in every rock group,” Tony Visconti writes. And we keep a little Marc in our hearts, too.

The magazine’s in shops on Thursday (January 14) but you can order a copy online now, with free UK P&P.