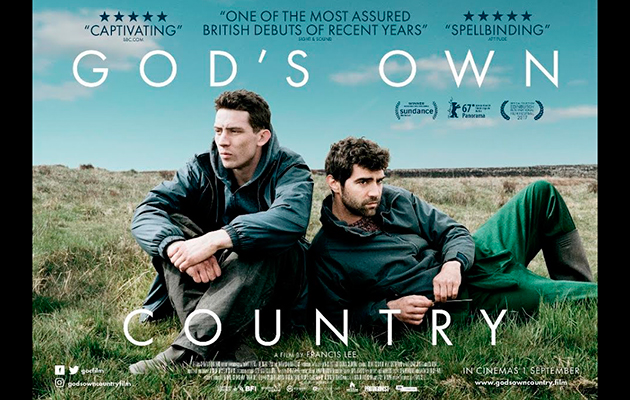 The first 20 minutes of God’s Own Country has it all. Buggery, death, migrants and the bloke from The Durrells – all set in the West Riding of Yorkshire. It is in this rugged landscape that Johnny Saxby – Josh O’Connor, more recently seen huffing around Corfu as Lawrence Durrell – struggles to get by. He runs his family’s farm after his father (Ian Hart) falls ill. Conversation is terse and flinty; such is the tough, unsentimental nature of this community that a stroke is considered “a funny do”.

Repressed by work and responsibility, Johnny finds release in grueling drinking binges and rough sexual encounters with other men. It’s hard to tell whether Johnny is gay, or simply making do in an environment largely devoid of eligible women. During lambing season, the farm takes on a Romanian migrant worker, Gheorghe Ionescu (Alec Secareanu); up in the hills, Johnny and Gheorghe’s relationship develops away from prying eyes.

This debut feature from Yorkshire-born actor and first-time director Francis Lee shows the British countryside as a lonely and unforgiving place; his camera unflinching as it captures the graphic realities of livestock farming. It would be easy to see God’s Own Country as an uneasy mix of Brokeback Mountain and All Creatures Great And Small – it isn’t. Instead it feels closer in spirit to Andrea Arnold’s Wuthering Heights – which similarly took place in an eerie, untamed wilderness – or Pawel Pawlikowski’s splendid Yorkshire-set same-sex romance My Summer Of Love.

Lee’s cast are excellent, from O’Connor’s gloomy, embittered Johnny to Secareanu’s resourceful Gheorghe and, in supporting roles, Hart and Gemma Jonesv, as Johnny’s prickly, pragmatic grandmother. Both the older Saxbys cling stubbornly to outdated traditions; it falls to Johnny and Gheorghe to find an alchemy of their own to forge a path to the future.