Armando Iannucci: “the CIA is just full of people who are a bit disorganised”

For the next issue of Uncut, I've reviewed Season 1 of Veep. In case you're not familiar with the show, it's basically Armando Iannucci's attempt to relocate The Thick Of It to the White House. 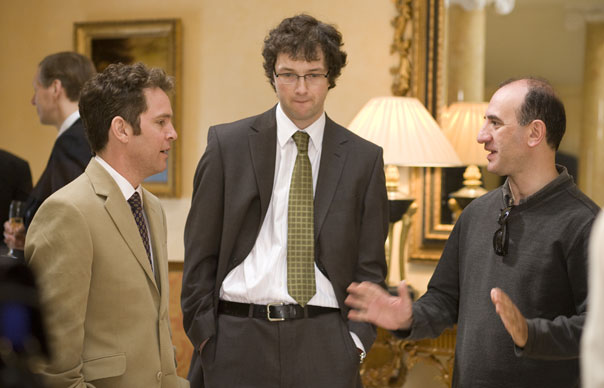 For the next issue of Uncut, I’ve reviewed Season 1 of Veep. In case you’re not familiar with the show, it’s basically Armando Iannucci’s attempt to relocate The Thick Of It to the White House.

By pleasing coincidence, Season 2 of Veep premiered last night on HBO in the States, so I thought I’d take the opportunity to dust down this interview I did with Iannucci in spring 2009, around the release of The Thick Of It spin-off film, In The Loop. With hindsight, it’s interesting to look at Iannucci’s engagement here with the American political system and how, I assume, his experiences on In The Loop eventually fed into Veep.

UNCUT: What’s the relationship with The Thick Of It? You’ve got the same faces in the cast, but they have different names.
IANNUCCI: I wanted to draw on The Thick Of It troupe of actors, but to take it to a new ministry. What’s interesting is that the film is like a whole new bunch of characters – apart from Malcolm and Jamie – and it’s the world that’s suddenly expanded. When we started doing The Thick Of It, it felt like we could keep expanding once we’d established the parallel universe of these people. In one of the specials we did, we introduced the Opposition, so suddenly you see the anti-matter. And I think it was once we did that I thought we could take it further, we could go global with it, go onto bigger scenes, and a bigger size of screen. But hopefully not lose the rawness.

Certainly, most sitcoms don’t translate to the big screen…
When I was making the film, I was thinking On The Buses Go To Portugal, or whatever, and it’s always shit. Then I realised this is The Thick Of It Goes To Washington. Why do these films go wrong? I think the temptation is to think: Oh, it’s a film, so I must use all the cinematic box of tricks, lots of music, big lovely crane shots. But I that would certainly kill the comedy here. The comedy films I like are ones where they just get on with it, like Monty Python And The Holy Grail, Airplane, This Is… Spinal Tap. They’re not fretting over the composition of the shot and the type of stock they’re using. Just do the job and move on, don’t hang around.

How do you think a film as deeply cynical as this will play to audiences still basking in the glow of Obama?
Well, they got it right away at the Sundance Festival. It almost seemed they wanted to get it out of their system; how the last 8 years has been welling up inside and them and they just wanted to go “Bleurrghh!!!” in a cinema. Obviously, we’ve been very conscious not to refer to real figures or a real country in terms of where the invasion is – I mean, war in the Middle East is vague enough, it happens every three years. So there’s the implication it could all happen again, it just needs a certain set of circumstances.

What happened when you were researching the film in the States?
I met up with people in the State Department. All these 23 year olds with enormous power that they talk about in the film. Some CIA people, some Pentagon people, some UN people. The CIA guy was very funny actually. In the build up to Iraq, they got a lot of intelligence from Baghdad newspapers because they were far more accurate than anything their people were telling them. He spent his first year at the CIA waiting for someone to tap him on the shoulder and say: “See that room over there? If you go through there, that’s where the real CIA is.” Somewhere full of big screens, like in Mission: Impossible. But that never happened. He just spent his time sitting at a desk looking at not much facts. You discover it’s not full of bad people, it’s just full of people who are a bit disorganised and it’s all a bit vague, and people are rubbish. Then you realise that these powerful institutions look powerful on the outside, but once you get inside you realise its just people doing jobs. And we all have our failings and things we’d rather hide.

Did you ever learn anything that made you stop and think: ‘This is enough!’?
The worse thing I was told is symptomatic of how a little bit of crapness actually is fine if you’re working in a bookshop, but it’s not so fine if you’re in charge of the world. Prior to the invasion of Iraq, when they were recruiting who’d be over there once they’d gone in and who would be running the country, they asked people if they could speak Arabic. And if anyone said yes, they were told, “Well, you can’t come because if you can speak Arabic that shows that you’re pro-Arab in your sympathies, and we don’t want that.” So you think, how hilariously misguided. But do you remember for about the first 18 months or so there was a whole spate of families in motorcars driving towards checkpoints and being told to stop but they would carry on, and so the American troops would fire on them? The hand signal of you putting your hand up flat in front of them in the West means stop, but in Iraq it means come forward. And because the soldiers didn’t have people who could tell them that, lots of families were killed. It’s terrifying. But I do firmly believe that because something is dealt with in a comedy that doesn’t actually cheapen it. It doesn’t let you take it less seriously. I think comedy is capable of taking on big, dramatic scenes, or potentially bleak scenes. But providing you’re still laughing you can deal with these things maturely. One of my favourite films is The Great Dictator. There’s Chaplin satirising Hitler and the extermination of the Jews. But at no point do you think, ‘Oh, no, he’s gone too far.’

How did James Gandolfini become involved?
Funnily enough, he’d seen The Thick Of It. We were talking about doing another thing for HBO and so I met up with him a few times to talk about that. Then as we were doing In The Loop, the character of General Miller came up and I thought he’d be perfect for it. It’s him playing against type, Miller is someone who looks like he talks the talk but in the end doesn’t really walk the walk. And because James likes the programme so much, he was really up for doing anything. With the American cast, we worked exactly the same was as we do the UK cast – we workshop stuff, we rehearse stuff, and improvise stuff, and try all sorts of things out – and it was great seeing him do comedy, ‘cos he’s a very naturally funny guy.

And you do get that face off with Malcolm…
Yeah, yeah, yeah. I didn’t really want a shouty, shouty…

I was rather thinking De Niro meeting Pacino in Heat…
… Rather than Alien vs Predator, for instance.

I gather Christopher Guest directed an American pilot for The Thick Of It. What happened there?
It didn’t get picked up. For a start, I was shoved out of the equation straight away. The BBC just went and sold it to the highest bidder without really telling me. So it was done in a very, very trad way, and it was a bit dull, really. Maybe Guest wasn’t the best person. If you look at the film, he favours a slow, considered unravelling, whereas The Thick Of It is, in its style, quite frenetic.

Recently, Warp reissued On The Hour on CD. What are your memories from that time..?
It was intense, very hard work. But there was no expectation, no pressure. It was completely out of the blue. We knew as we were doing it that it was making us laugh, and it felt fresh and different. We didn’t know if it was going to be a little, tiny cult thing, or a big thing, or somewhere in between, but we all felt glad to be doing it. It was hard in terms of the amount of time we’d spend just on the tiniest little detail, which I think you only can do when you’re young and starving and enthusiastic.

Can we expect a new series of The Thick Of It?
We’re right in the middle of writing some new scripts at the moment. We’ll see a little bit more of the Opposition, also the fact that actually an election is not that far off, careers on the line, especially Malcolm, so the end is looming in a way…