American Epic: How Jack White helped piece together the story of a nation’s musical roots

With help from T Bone Burnett, Robert Redford, Willie Nelson and many more

In 2006, the filmmaker Bernard MacMahon travelled to Cumbria to interview three musicians performing at the Mayport Bitter And Blues Festival. At the time, Honeyboy Edwards, Homesick James and Robert Lockwood Jnr were all in their nineties. Although he admits now that he had no specific project in mind, MacMahon instinctively knew he had to document the memories of “the three oldest surviving blues men”. It has taken ten years, but finally the interviews have been put to good use – in American Epic, MacMahon’s ambitious documentary series that airs in the UK on BBC4 on May 21, May 28 and June 4.

Across three films, the series explores how and why the music of the American hinterland came to be recorded. A fourth film finds contemporary artists – including Jack White, Alabama Shakes, Beck, Willie Nelson and Merle Haggard – recording on reassembled Western Electric recording machinery.

MacMahon has assembled some storied collaborators for American Epic, among them White, Robert Redford and T Bone Burnett. “It’s the story of the American recording industry from 1926 to 1936,” Burnett explains to Uncut. “In 1926 the record industry fell off 80 per cent in one year because of the proliferation of radio in the big cities. The middle-class people and the wealthy people who were able to buy radios no longer wanted to buy records, because they could get music for free – why buy a record? So the recording companies, having equipment and nothing to do, decided to go down south, where people didn’t have electricity, and therefore didn’t have radios. So they started recording people down south – they started recording the poorest people in the country and broadcasting their voices all around the world.”

MacMahon and his team conducted interviews with surviving family members, peers or other eyewitnesses to document the lives of artists including Charley Patton, The Memphis Jug Band and Joe Falcon. Among those, Dale Jett Carter and Fern Salyer – the grandson and niece, respectively, of AP and Sara Carter – are filmed at the Carter Family homestead in rural Maces Spring, southwest Virginia.

Meanwhile, MacMahon’s investigations into Elder Burch – a pastor who brought his church choir to Atlanta in 1927 and in one session recorded nine sermons and a hymn, “My Heart Keeps Singing” – took him to Cheraw, South Carolina. There, he filmed Ted Bradley, a community elder, and the only person alive who could remember Burch. Bradley’s testimony – “He was a tall, good looking man, he would stand there rocking his spats, his shoes always shiny, he was well dressed” – is all the more remarkable considering he had not seen Burch for 70 years. Meanwhile, the stories of Irving Williamson, Dick Justice and Frank Hutchinson forgrounds the music made by the coal miners of Logan County, West Virginia. These stories are enhanced by researched archive footage and photography as well as the contextualizing observations of musicians including White, Taj Mahal and Charlie Musselwhite. 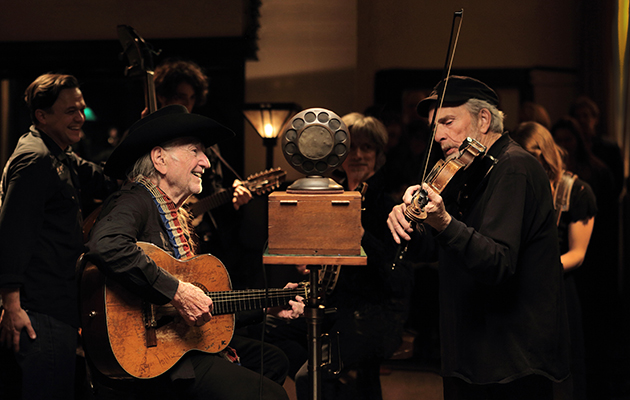 Early in the project, MacMahon sought the counsel of Jeff Rosen, Bob Dylan’s manager, who put him in touch with T Bone Burnett. “I flew to LA and met T Bone at Village Recording Studios,” says MacMahon. “He was sitting at a console with Elton John, who said, ‘Do you mind if I listen in? T Bone’s been telling me about it.’ T Bone came on board, then two weeks later he called and said, ‘I’ve been meeting with this Hollywood guy. I mentioned this idea and he’s really interested.’ That was Robert Redford. He listened to me talk for about half an hour and said, ‘This is America’s greatest untold story. I’m in.” Jack White, meanwhile, came aboard via a less formal route. “A friend gave me his email. I sent him three lines. ‘I have film footage of Sleepy John Estes from 1914 and I have a picture of Son House from the early ‘30s. I’m working on this documentary.’ He wrote back in five minutes.”

Another key collaborator was sound restorer Nick Bergh, who had constructed a Western Electric recording machine. MacMahon tracked down the Scully family, who invented the recording lathe. “The lathes were so durable, there were only about 900 made to cut records around the world,” says MacMahon. “They kept a 1924 lathe in the basement. It was gleaming. ‘At that point, I thought maybe we should go further with this. Why not construct a series of sessions, just like the ones in the documentary films, and see what happens?’”

Presided over by White and Burnett, the American Epic sessions – which comprise the fourth film – took place at a privately owned studio in Melrose, Hollywood. “We had one artist in the morning, and one in the afternoon,” says MacMahon. “They would have an hour to arrange the song with the musicians then they’d gave to record it all in one go. Willie [Nelson] and Merle [Haggard] came in at the end. I found it very moving. They would have grown up listening to the people who recorded on this machine. They were in the own world doing this. Not even Jack could to talk them. It was like they were communing with something, getting something out of this beyond what the other artists were.”

Back in Cumbria, Honeyboy Edwards, Homesick James and Robert Lockwood Jnr consider how the blues has changed since the days of Charley Patton. Artists today, it seems, don’t quite stack up to the originals. “They never ploughed a mule,” says Homesick James. “And that’s what makes the voice. They ain’t never hollered behind a mule.”

BBC ARENA PRESENTS AMERICAN EPIC SCREENS ON BBC FOUR ON MAY 21, MAY 28 AND JUNE 4.