The Arctic Monkey talks us through Favourite Worst Nightmare 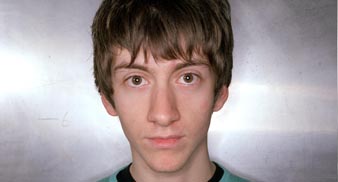 Q and A
UNCUT: How was recording this one different to doing the last one?
ALEX TURNER: The recording of the first one was a swift thing, because we had all the songs and the order and everything all planned. We’d also played all of those songs live, and we’d had some of them for a year, even then. With these songs, we hadn’t played the before recording them – we’ve played them at three gigs so far, six of the ones off the record and one B-side. I think they’re going down pretty well – I could see some people mouthing the words. We played “Flourescent Adolescent” and this girl got on someone’s shoulders: she sort of smelled a chorus coming.

Did you feel under pressure to make a great follow-up?
We tried not to dwell on that – I was more excited about having new songs, it was just exciting to get a chance to move on a bit from the last record. Even though the campaign wasn’t as long as it could have been – we’d been playing those songs a long while, so we definitely felt like the time had come to move on. So I don’t think it was ever “Oh fucking hell, we’ve got to make another record.”

Where were the songs written?
Some were written on the road – but I always try to write songs. Like right now, I’ve written about six tunes since the record. Some are just me with an acoustic, but others come from when we’re in practice – there’ll just be like a riff or a drumbeat we’ve recorded on a phone or something, and we’ll build it up from that. There’s loads of bits and then we put them altogether. You can only go so far strumming with an acoustic – it can become a bit one-dimensional.

How did you want this to sound? It’s a big-sounding record…
We spent a bit more time, because we’re a bit more into sounds – there’d be bits, or guitar sounds that we liked, and wanted to do bits like that. The drum sounds we wanted to get sounding really fat. We did a session with (producers)James Ford and Mike Crossley on the last record and got on really well, and wanted to do something else – all year round I was thinking “I want to try with them two…” They were very involved in getting the sounds.

Last time around the title came from Saturday Night And Sunday Morning. Where’s the title Favourite Worst Nightmare come from?
This time it’s from a lyric in one of the songs. I’ve been finding it hard to describe, actually. But there’s a lyric in the “D Is For Dangerous” song, and it seemed to tick all the boxes for what we were after in a title. As far as concerns what is your favourite worst nightmare, I think I’d describe it by saying it’s like someone with a gambling addiction – they get something out of it, but they know it’s bad for them. But in the song it’s more to do with… a woman.

The record sounds quite Smithsy in places…
I think most of the Smiths stuff I’ve kind of put to one side for a bit – a couple of years ago, I got very into them and The Jam, like you do when you’re getting into guitar bands. As a band last year on tour we were listening to a lot of Prodigy, the …”Jilted Generation” album. The way there’s loads of changes and bits in songs – I think “Brianstorm” is a bit like that. There were a lot of tunes we were listening to in the studio – that band the Shocking Blue, who did “Love Buzz” and “Hot Sand”. “Release The Beast” by Breakwater – the rhythm on that is great. On tour, we always like Queens Of The Stone Age and The Coral – those are ones we all agree on.

The music business makes an appearance in your record. Was that inevitable, given what’s happened to you?
I wanted to kind of play that down a bit, really – it’s just on one song. And it doesn’t so much refer to the music business as to the press: the tabloidy kind of people. I don’t think we got it that bad really, we were never on the front page, but the only thing that was bad about it was when they were ringing up our friends, and trying to get goss out of us mates, and that was a bit much. And my ex-girlfriend got a bit of hassle – ‘If you Were There’ has a bit of a go at that, but it doesn’t really dominate my thinking, so it would have been a bit weird for that to dominate the record. When that all happened there were a few lines about all that kind of stuff, but as the year went on, they got replaced with more important things that I want to sing about every night.

What did dominate you thoughts, then?
I don’t know – probably girls again. It’s normally that, isn’t it? They get under your skin, don’t they? I think they leave us alone a bit – we don’t get recognised most of the time, and I think that’s a good thing.

You’re very prolific? Was it tough to know which songs would make it?
It was hard – we had 20, and we all had our favourites. There’s a song called “What If You Were Right First Time”, which we’re playing live at the moment, and it’s a big favourite, but we just couldn’t make it fit on the record. It was difficult, but we think we’ve worked it out now. We always want to do quality singles – you want it to have a few good tunes on it, not a fucking…video. In twenty years, I’m quite into the idea of people saying “Do you remember the Arctic Monkeys? The best song was the third track on the single…”