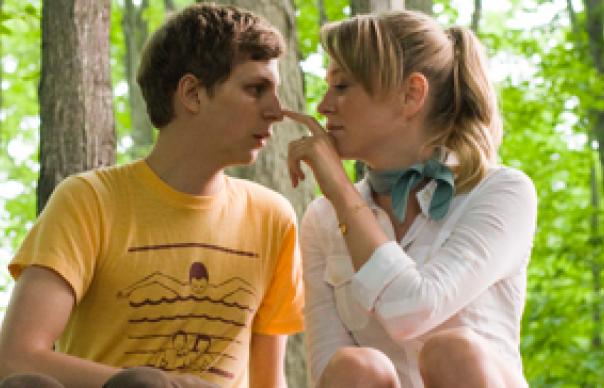 It’s perhaps serendipitous that CD Payne’s Nick Twisp emerges onto our cinema screens within a week of JD Salinger’s death.

Payne’s Twisp is, like many of literature’s angsty teen protagonists since Catcher In The Rye, inevitably caught in the shadow of Holden Caulfield. Certainly, Twisp channels many of Caulfield’s nerdy, super intellectual qualities, as well as his penchant for vivid fantasies.

But Twisp – played here by Michael Cerra – also captures something of Woody Allen’s neurotic anti-heroes. If – with Juno and Superbad – Michael Cera has become the go-to guy for filmmakers searching for a stringy leads with zero muscle-tone for their hipster studio-indie comedy, then Youth In Revolt arguably finds Cera drawing a line under this phase of his career. It’s Ferris Bueller meets Fight Club! Sort of.

Twisp – a chronic masturbator and Sinatra fan – lives in a trailer park with his mum and her boyfriend. He meets Francophile teen Sheeni, and sets out to win her love, to which end he’s prepared to create a fictional alter ego, Francois Dillinger, to liberate his libido. Director Miguel Arteta punches the plot – essentially, a series of increasingly absurd sketches – along, and there’s excellent, if brief, turns from Steve Buscemi, Ray Liotta, M Emmet Walsh and Fred Willard. It’s funny, but you wonder who the demographic is. As the film skips along through increasingly bananas set-pieces – gasp as Twisp attempts to allude the police while wearing a dress and string-set! – you suspect the biggest laughs are coming from thirtysomething males, rather than 16-year olds who might prefer to see Cera in something similar to Superbad.