Yoko Ono Plastic Ono Band – Between My Head And The Sky

Violent, but tender, Sean Lennon’s mum is back! 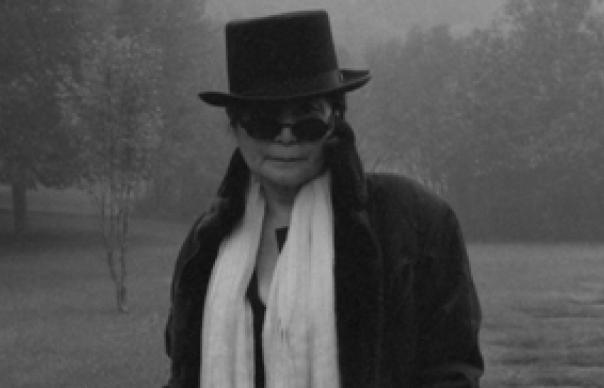 Rock and art: it’s funny, it seems an awfully long time since bag-ism and bed-ins and jamming with bearded men in robes, but about 10 seconds since Fluxus and cutting clothes off and white chess sets. Yoko Ono’s early rock excursions are, understandably, somewhat of their time; but then, so were her collaborators. John Lennon apart, she was working with Eric Clapton, Frank Zappa, Elephant’s Memory, all talented artists, but men who had come up through the blues, and jazz, and Marshall amps, and all that hoo ha.

Yoko Ono’s art came from an uncluttered place; nobody save possibly John Cage has ever used so much space, and whiteness, and silence in their work. And it’s that which has always served her well, in both her art and her music. From David Bowie to the B-52’s, rock artists have always respected the simplicity and modernity of Yoko Ono’s work and when she released her 1980s single, “Walking On Thin Ice”, it fit right in to the new era (not least because John Lennon shoplifted Talking Heads’ “Cities” for the riff).

Yoko Ono’s work has been mostly excellent (though I’m still trying to erase from my memory a concert at the Wembley Conference Centre where she sang “Imagine” as audience members waved candles) and almost always essential. “Don’t Worry Kyoko”, “Mrs Lennon”, “I Felt Like Smashing My Face In A Clear Glass Window”, “Mind Train”, “Walking On Thin Ice”, “Nobody Sees You Like I Do”, “Rising” – these are just a few of the songs Ono has recorded in the past 35 years that everyone should own, encompassing not just the brilliant, hippy-distressing AAIIIIIEEEEEE!!!!! primal wail that thrills even now, but also in recent years an emotional sound which contracts with her sometimes chilly early work.

Perhaps it’s the murder of her husband that released a desire to communicate quieter feelings, perhaps it’s her upbringing in a somewhat distant Japanese well-to-do family, or just the passage of time that makes us all reflective. But Yoko Ono’s music since the 1990s has been dissonantly thunderous and quietly melancholic.

She’s also continued to have a genius for collaboration. In the 1970s, she often used John Lennon’s superstar friends, and in recent years she’s worked with Sean Lennon’s band (this album is on his label), who are forceful and happy, as you might expect, with both avant-garde and modern rock stylings.

2007’s Yes, I’m A Witch (in your FACE, misogynous rock) saw her give her old recordings to everyone from Cat Power and Peaches to Hank Schocklee and Jason Pierce, with suitably grateful results. Ono may not have been a direct influence on all these people, but without her, they’d all be playing the ukulele on a boat. Possibly.

And now she releases an album with a classically Yoko title, which like much music made by people who’ve got a hell of a back catalogue, leans on every style of her career. There’s a rhythmically heavy train song (“Waiting For The D Train”). There’s a gorgeously affirmative piano piece (“I’m Going Away Smiling”) which may well be about John Lennon. There’s both primal and post-electro blip on “The Sun Is Down” (the collaborators here are Sean Lennon, New Yorican Japanese band Cibo Matto and Tokyo’s Cornelius).

A few of the songs here are in Japanese, which is only fitting, and a lot of them (“Ask The Elephant!”) have Ono’s elliptically charming wit (if she is a witch, she’s a very funny one). The general impression is unsurprisingly eclectic with, slightly surprisingly, a lot of trumpets. The final track, “I’m Alive”, is 26 seconds long, features nothing but four words and some curious banging, and is the most moving thing I’ve heard in ages.

This is an excellent album that manages to be both a mature summary of an artist’s career and something completely fresh and new. At a time when the old daddy singers are congratulating themselves for being able to enter a studio and re-record their own songs, it must be a great source of satisfaction for Yoko Ono (and if he’s around in the ether, John Lennon) that she is out-performing, out-classing and out-original-ing her husband’s 1960s peers. But then, she always did.