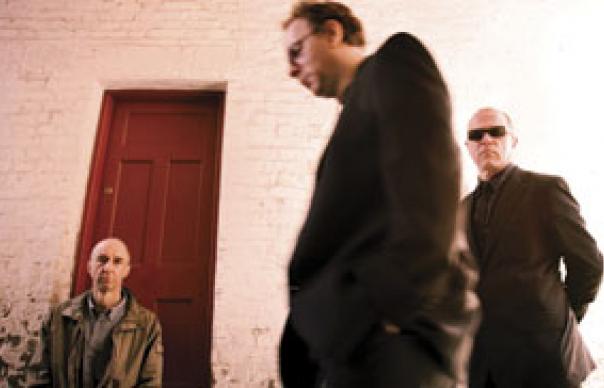 When we read about British bands and art school, the dominant anecdote, on closer inspection, is seldom a recollection about art, and more one about truancy. In the lenient halls of academe, as prowled by Lennon, Richards and (the comparatively studious) Townshend, there was much smoking and skiffle, but little in the way of, say, actual drawing.

Wire, on the other hand, are a band who have spent their 35-year career steeped in the guiding principles, anti-nostalgic thinking, and formal discipline of art school. On one level, it meant that their albums came housed in striking graphic art. On another, it meant that their approach claimed new ground for rock music, the brevity of their compositions a conceptual end in itself – the enduring songs (“I Am The Fly”, “Map Ref”, “Outdoor Miner”) almost a by-product of their process. When I interviewed Bruce Gilbert and Colin Newman in the late 1990s, they never once referred to their band as “us” or “we” – only ever in the third person, “Wire”.

This, suffice it to say, is an unsentimental band, for whom reinvention, a search for new ways of doing this an occupation in itself. Their relationship with the legend of their initial activity, the three pivotal albums for Harvest, Pink Flag (1977), Chairs Missing (1978) and154 (1979) is uncomfortable: when they reformed in the 1980s, they employed a covers band to play their old material, so they wouldn’t have to. When in 1991 everyone was dropping E, Wire dropped theirs and became Wir. Wire’s has been a strange journey with guiding principles and a sense of humour that now arrives at Red Barked Tree.

It’s not an album that you would call a compromise. But, rather than following the band’s custom of drawing a new template each time it reconvenes, it brokers a peacable accord with some of its most popular work. Since 2003 Wire have slimmed down, (original guitarist Bruce Gilbert is no longer part of the group), and this picks up from where 2008’s Object 47 left off, again finding Wire revisiting its component parts.

Red Barked Tree is the most successful product to date of this examination. As interesting as they are as ideas men, Wire’s most successful work finds room in among the thinking for succinct guitar pop, and for their wry vocabulary, and it’s evidently a quality they themselves recognise. Object 47 opened with a song whose hook was: “One of us will come to rue the day we met each other”, and the same mixture of the prolix and melodic is present and correct here.

The best Wire records have the air of a code that’s so attractively stated, it demands cracking, and Red Barked Tree is assuredly in that number. It begins with the flanging guitar sound familiar from their earlier works, and of course, with an unwieldy sentiment (“Get the fuck/Out of my face…”) rendered as a hookline. What marks this out as a step on from their recent releases is the lightness of touch. The album continues with the superb “Now Was”, a slightly feistier song, its guitar textures making for a swelling, dynamic tune. The good words (from bassist Graham Lewis) are key: “New broom is coming,” Colin Newman confides, “I feel a close humming…”

“Adapt” sees Wire making peace with their influence; slothful and tuneful, it sounds like My Bloody Valentine. “Two Minutes” is a profanity-laced tirade dispensing thoughts on coffee and south east London pubs (“In The Ring/On The Cut/In five minutes!” it demands), while “Moreover” references the band’s historically heavy riffs. It’s familiar, but different. It’s Wire: Ancient And Modern.

At times you could feel a bit guilty. Should one be enjoying a new Wire record that sounds quite a lot like an old one? Will a siren sound, a trapdoor open, and a summary trial convict you of Nostalgia Crime? It seems most appropriate to leave those concerns behind, and simply enjoy it. Wire, after all, have moved on.
John Robinson

Q+A COLIN NEWMAN
Is Wire 2011 at all like Wire 1977?
What we’ve done is a compressed version of what we did in the 1970s, but with the experience of many years playing. It’s not a question of: “Let’s do it just like we did.” It’s about a moment. When we play live we play Wire music, we don’t stick tags of time periods on it. It’s what we think we can get away with.

You made a big break with your older material when you reformed in the 1980s, didn’t you?
It was about context. Pop historians talk about “post-punk” but there was no such thing. What there was was pop. People were bored to death with punk rock: if you were more adventurous, you were getting into music from different countries. Bruce’s decision to re-invent the band wasn’t conceptually a bad idea, but we were misunderstood.

This version of Wire doesn’t feature Bruce Gilbert. Why?
He just left. He didn’t explain why. Around 2006 we thought we’d like to make some more records, so we went to him with a positive proposal. And he said “no”.

How did Red Barked Tree come about?
I came to the conclusion I needed to write some songs. I strummed away on an acoustic guitar – it allows the band to interface directly with the creation at its most naked. The world doesn’t need a substandard Wire album.
INTERVIEW: JOHN ROBINSON