From the mean streets of Nottingham, two formative Shane Meadows shorts from ’95 and ’96... 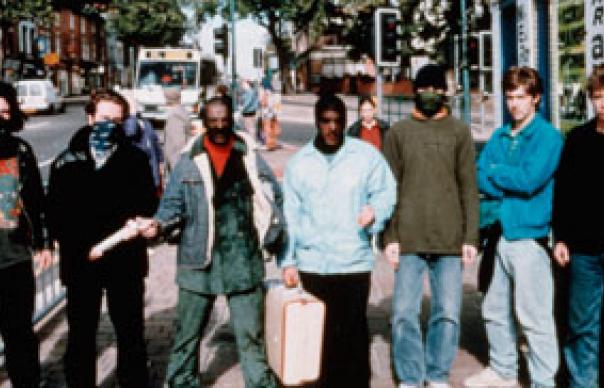 “I was part of a group of 10 to 15 people, and we’d always be involved with something,” Shane Meadows once told me, reflecting on his formative years in Nottingham. “It wasn’t until later that I started feeling bad about some of the things I’d done. I’d never been into a house and stolen, but I got caught for receiving some John Lowe darts and an egg custard. They were very, very poor crimes.”

It’s exactly these kind of “very, very poor crimes” that figure in two early shorts, unavailable since a VHS edition in 1998. From 1995, Where’s The Money Ronnie? is a 10-minute, black-and-white, Rashomon-style retelling of a street robbery from the point of view of the four suspects. It’s full of Meadows’ larky humour, and displays the earliest stirrings of Meadows’ well-documented fascination with Scorsese movies. Hilariously, he shoots the introductory sequences to each of his protagonists like – yes – Mean Streets.

We encounter more low-level crooks in 1996’s Small Time, a ragtag bunch of mates and their girlfriends living in the run-down Nottingham suburb of Sneinton, who “rob from the rich and sell it to the poor at half price”. A kind of low-rent Reservoir Dogs in shell suits (the costume budget was £10 per character), the peak of their petty thievery is a dog food heist from a local corner shop, or robbing videos from a car boot sale. But while they’re almost entirely hopeless, Meadows clearly has much affection for his characters; these films are “celebrations of the community I grew up in and the people there,” he told me.

Certainly, there’s much warmth in evidence in the dialogue, particularly its robust rascally humour. “He’s got his provisional licence,” says one character, introducing a potential getaway driver to the gang. “Anyone can have a fucking provisional licence,” comes the reply. “No, not anyone. That’s where you’re fucking wrong. You have to be over 17, don’t you?”

You keep catching the cast trying not to corpse, and the vibe here is of a bunch of mates and amateurs having a lark. But for all the crap wigs, there’s nothing half-arsed here. There’s energy, flair and style to both these films (unsurprisingly, Meadows is reported to have made 30 shorts while living in Sneinton) that equipped him well for TwentyFourSeven, his full-length debut. It is interesting returning to these films and watching them against Meadows’ This Is England 86 (released by 4DVD this month). While obviously a slicker, more polished affair, TIE86 takes as its focus the larks and loves of a gang of mates; a very similar conceit to Small Time.
EXTRAS: None.
Michael Bonner