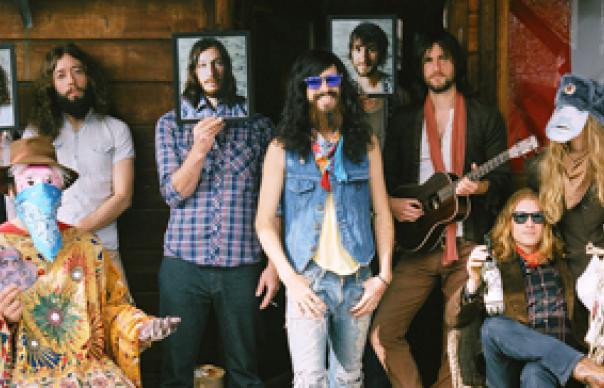 In 1998, inspired by the historical detail in nephew-in-law Ed Pettersen’s folk ballads, former Attorney General Janet Leno had anunusual idea. Dismayed by what she saw as the average Americanstudent’s ignorance of US culture, “Aunt Janny” suggested he make amusical keepsake of the nation’s history. Jotting down key events andthemes, with Pettersen as project leader, what began as an educationaltool for lit-shy kids has blossomed into the spectacular Song Of America.

Bookended by Native American hymn “Lakota Dream Song” (deftly delivered by Earl Bullhead on a hand drum) and 9/11 lament “Where WereYou When The World Stopped Turning”, five centuries of song are crammed into three red-white-and-blue discs. It’s all here: colonial war, revolution, immigration, the expansion of the West and capitalism.
But this is no stuffy museum piece.

Leftfield talent like Devendra Banhart, Andrew Bird and Danielson blast fresh air into the lungs ofthese old standards. It makes for a very now, peculiarly resonantlibrary of song. To the credit of co-producers Pettersen and David Macias, the tone is patriotic in the truest sense. This is The Good,The Bad and The Ugly rather than God Bless America.

Disc One is the most beguiling, from wordless acappella and spirituals (The Blind Boys Of Alabama‘s shivery “Let Us Break Bread Together”)through to BR549’s “Sweet Betsy From Pike” and the kind of choral harmonies you’d expect to hear wafting over a river baptism in some forgotten corner of Mississippi. Disc Two is more Celtic-flavoured,reflecting the arrival of turn-of-the-century European immigrants,before setting soil with Bird’s stunning “How Ya Gonna Keep ‘Em Down On The Farm” and Suzy Bogguss‘ swinging jazz turn on “Rosie The Riveter”. And while Disc Three is least impressive and, in Ben Taylor‘s “Ohio” and Anthony David’s “What’s Going On?”, a little too worthy, Banhart’s kooky “Little Boxes” and Matthew Ryan’s “Youngstown”are, like this entire set, oddly powerful.