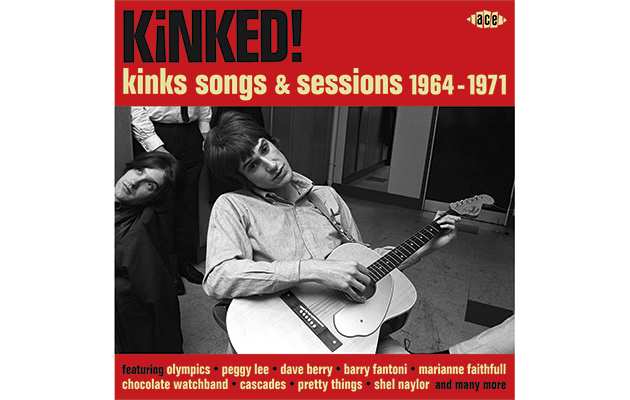 There have been no shortage of major artists covering Kinks song over the years – from The Jam to The Fall, from The Stranglers to the Pretenders, from Bowie to Costello, Madness to Blur, Van Halen to Metallica, Big Star to Bruce Springsteen. Not to mention the Blue Aeroplanes, and Yo La Tengo, and Kirsty MacColl, and The Raincoats, and Jimmy Buffett, and Green Day… and on, and on.

However, less well known are the many Ray Davies songs that were barely even performed by The Kinks before being farmed out to other artists. By the start of 1964, even before “You Really Got Me” and “All Day And All Of The Night” had turned The Kinks into stars on both sides of the Atlantic, manager Larry Page was touting the Davies brothers around Tin Pan Alley. Dave’s rudimentary three-chord number “One Fine Day” was released in March 1964 by 17-year-old howler Shel Naylor – the recording is notable for featuring both Jimmy Page and John Paul Jones in the backing band. Released simultaneously came the girl-group the Orchids’ shouty version of “I’ve Got That Feeling”, a slightly more sophisticated Ray composition that The Kinks would later record on their debut album.

From this point on, it was Ray’s songs that Larry Page started to sell as he tried to break the States. “So Mystifying”, a simple, up-tempo, Rolling Stones-indebted thrasher from the first LP, was recorded in December 1964 by African-American doo-wop band The Olympics (best known for their version of the rock’n’roll standard “Hully Gully”). This wonderfully chaotic recording – featuring Glen Campbell, Don Randi and Sonny Bono among the stellar sessionmen – has remained unreleased until now, possibly because the vocals stray out of tune on more than a few occasions. Another Californian vocal outfit, The Cascades, performed Ray’s “I Bet You Won’t Stay” – a fine piece of baroque pop where their massed harmonies surf over an elegant harpsichord backing.

Even more prestigious was a commission from Peggy Lee: Davies provided the bel canto verses and precise, staccato chorus lines of “I Go To Sleep” with her in mind. Lee’s reading of this waltz sounds a little fast and flippant (especially compared to the Pretenders’ funereal 1981 hit) but it remains a fascinating example of how Davies wrote for other artists. “I’m Not Like Everybody Else”, for example, was written for the Animals, although the howling, proto-metal 1968 version by California’s Chocolate Watchband turned it into something of a garage rock standard.

Dave Berry’s version of “This Strange Effect” was a minor hit with in 1965, as was the Honeycombs’ “Something Better Beginning” (which has been replaced here by their version of Ray’s Beatle-ish “Emptiness”). But, surprisingly, little else made the UK chart. One rare success was “Dandy”, a jaunty music-hall number about a womanising cad, apparently inspired by Michael Caine’s Alfie and brother Dave in equal measure. Never released as a single in the UK, it was – much to Ray’s chagrin – a Top Five US hit for Herman’s Hermits, who add a rather wobbly string line to The Kinks’ own acoustic arrangement.

The Kinks sold well in France, and, in 1966, Petula Clark recorded a French-language version of “A Well Respected Man” (“Un Jeune Homme Bien”). Produced by Tony Hatch, it fits Frank Gérald’s lyric so comfortably that you’d barely imagine that it was anything but a French song. Other Ray Davies compositions also resemble Gallic chansons: the uncharacteristic “Oh What A Day It’s Going To Be”, is rendered as a dramatic Jacques Brel-style ballad by Mo & Steve (a budget-priced Walker Brothers from Manchester). Meanwhile, Davies’ art-school pal Barry Fantoni – a caustic TV presenter and Private Eye cartoonist – sings a wonderful obscurity called “Little Man In A Little Box” that sounds like one of Serge Gainsbourg’s low-key epics.

The removal of Ray Davies’ voice also forces us to see his songs as theatrical constructs, performed in character, not least when they’re being sung by female singers such as Marianne Faithfull. “End Of The Season”, here recorded by Brummie mods The Uglys, is sung in the character of a dissolute aristocrat. “I just can’t mix in all the clubs I go,” complains the gently reactionary narrator. “Now Labour’s in, I have no place to go.” Likewise, when Ray sang the boss-baiting “A House In The Country” – surely an unheralded precursor to Blur’s “Country House”? – he did so with a rather embattled fury; the Pretty Things here provide a Stonesy version that treats the protagonist with a gleeful envy.

There are other fine songs on this album, and equally fascinating stories. “All Night Stand”, for instance – here performed by Peter Beckett’s Scouse combo The Thoughts – was commissioned as the soundtrack to the movie adaptation of a racy piece of pulp fiction about the dark side of the music business. And there are dozens of other covers that didn’t make it: by the artists here along with the likes of Cher, Lesley Duncan, Ray McVay, Formula One, Majority, Lemmy and the Rockin’ Vickers, not to mention a whole LP of easy listening instrumentals from Larry Page’s Kinky Music. A volume two surely awaits…