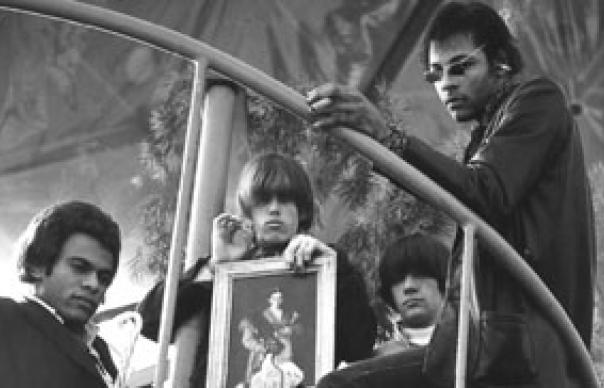 After 55 years in the American music business, it looks increasingly unlikely that we’ll hear from Elektra Records again. Formerly home to Tim Buckley, Love and The Doors, Elektra had a nondescript 1990s before being merged in 2004 with Atlantic. We are told it now exists merely “as an imprint of an office within the Warner Music Group corporate structure”.

An imprint within a structure is a sad end for a label that earned an international connoisseur audience in the 1960s with its mouthwatering folk/rock/blues roster, fastidious production values and trend-setting cover art. Even today – diminished to CD size – the landmark Elektra recordings (“Strange Days”, “Forever Changes”, “Goodbye And Hello”) are artefacts of alarming beauty.

No matter what the genre, Elektra’s Jac Holzman specialised in promoting off-kilter, incorrigible talent (Phil Ochs, Arthur Lee, Jim Morrison, Iggy Stooge), not only reflecting, but undoubtedly influencing, the strange course that American music took in the Vietnam era. From folk-rock to Lizard Kings to the 1970s singer-songwriter boom, Elektra’s logo was at the forefront.

A five-CD anthology, “Forever Changing: The Golden Age Of Elektra Records 1963-73” doesn’t attempt to straddle the label’s lifetime. Compiled by three Englishmen (Uncut regular Mick Houghton, Stuart Batsford and Phil Smee), it focuses on a 10-year period of acceleration and revolution which made Elektra successful, but also unrecognisable.

The box set begins with the first of six appearances by Judy Collins (“Turn! Turn! Turn!”) and ends, a decade later, with a mortally over-hyped Bowie impersonator named Jobriath. It’s a proper story. The 40,000-word booklet tells of genius, madness, vindication, failure, disillusion and death. The compilers have been assiduous, skilfully sequencing 117 songs into a convincing ‘flow’, including more than 50 never released on CD before.

The first disc is primarily non-electric. On its picaresque journey we encounter strait-laced balladeers, railroad hollerers, jug bands, banjoists and the political activist Ochs, represented by his anti-warcry “I Ain’t Marching Anymore”. Judy Henske’s “High Flying Bird” (1964) is folk-rock’s future delineated in booming drums and bending guitar licks. Dick Rosmini’s triptych of impressionistic instrumentals rivals Bert Jansch. And whilst the more earnest folkies, inevitably, sound cruelly quaint at 40 years’ remove from Dallas motorcades and Cuban missiles, Fred Neil (“The Other Side To This Life”) has a voice so sensually chocolatey that the generations between us and him simply fall away.

The following two discs acknowledge Elektra’s 1966-67 move into electric rock with Love (“My Little Red Book”, “Alone Again Or”) and The Doors (“Light My Fire”, “Five To One”). Neither disc relies very heavily on rock, however. There are haunting, well-chosen performances from Elektra’s coterie of idiosyncratic singers: Tom Rush, Tim Buckley, David Blue, David Ackles, Nico. The UK’s Incredible String Band (“First Girl I Loved”) apply their outlandish Kenneth Williams voices to a rites-of-passage tale suffused with Indo-Chinese exoticism. And as the compilers intrepidly chart the outermost reaches of the Elektra roster, even ’60s aficionados might stare blankly at names like Alasdair Clayre, David Stoughton and The Waphphle. This is serious archivist stuff.

Indeed it’s disc three, a minor miracle of judicious programming, that affords most pleasure. Tom Rush’s poignant prototype of “No Regrets” is counterbalanced by Stoughton’s eerie toytown whimsy. The lethal melancholia of Nico and Ackles is cobwebbed away by the motorvatin’ Stalk-Forrest Group (a pre-incarnation of Blue Oyster Cult), who propel us towards the MC5’s fever-pitched “Kick Out The Jams” by way of Delaney & Bonnie. Even Judy Collins, whose kumbaya-my-lordy tintinnabulations aren’t always welcome, is resplendent on “Both Sides Now”.

Elektra now led the field in artist diversity, and disc three proves it. But, tellingly, after a fists-flailing Stooges opener to disc four (“Down On The Street”), it’s fumigation time. The antiseptic scalpels of soft-rock make their clean incisions: Bread (who’d sell millions) and Farquahr and Plainsong (who wouldn’t). The singer-songwriter craft, always vital to Holzman’s plans, was dominating Elektra once again by 1972. The new superstar was not Jim Morrison, but Carly Simon.

Disc four has laidback vibes, then, but not much mood alteration. There‘s little ‘exclusivity’, little to distinguish Elektra from other labels – from David Geffen’s Asylum, for instance, with whom Holzman sanctioned a 1973 joining-of-forces. Elektra forged ahead into punk and New Wave (where it signed Television and The Cars), and even beyond to the Pixies and Sugarcubes, but its original identity had totally evaporated.

That identity is a moot point when we consider disc five, which aims to take “a more skewed and tangential perspective”. The joker in “Forever Changing”‘s pack, disc five has no musical policy or mission statement, save that its contents are roughly chronological. Some of these bands didn’t stay at Elektra long. The Beefeaters became The Byrds, joining Columbia. The Lovin’ Spoonful signed to Kama Sutra. Eric Clapton & The Powerhouse, a supergroup with Steve Winwood, was a 1966 studio one-off. Along the way, disc five is sidetracked gleefully by calypso crooners, bluegrassmen playing Beatles covers, marijuana paeans by pro-legalisation campaigners and – yes – bloody Judy Collins.

But you can’t complain. The adventures, the snap decisions, the gambles and mistakes of life – “Forever Changing” has them all. It has music. Music that allows us to bear witness to what must have been a fabulous ride.