New Yorkers at the top of their game on elaborate love letter to their hometown... 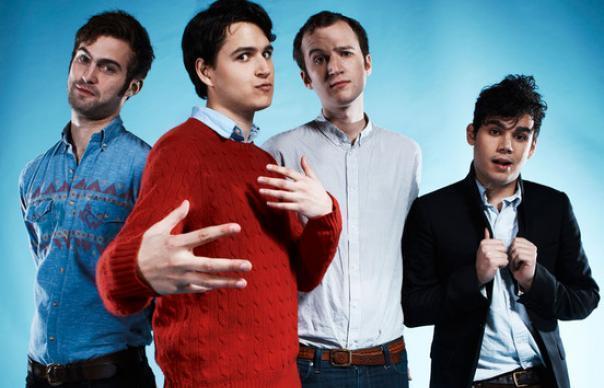 Earlier this year, on Easter Saturday, the four members of Vampire Weekend took a stroll along New York’s Fifth Avenue accompanied by the actor Steve Buscemi. It was the occasion of the Easter Parade, and so the band wore slightly brighter threads than usual, topped off with bunny ears and silver top hats, and each carried a basket full of sweets to hand to children on the way. Buscemi wore a dark blue suit and top hat and sang the bluesy chorus of Vampire Weekend’s new single “Diane Young” – “Baby, baby, baby, baby right on time” – through an old-fashioned loud hailer. Of course, this was a filmed publicity stunt to draw attention to the upcoming Vampire Weekend live concert stream Buscemi would be directing, but it neatly illustrated the remarkable appeal of the New York band in 2013: significant enough to attract a star of Buscemi’s calibre – their last album Contra topped the US charts three years ago, remember – but more than happy to goof around in fancy dress for the kids.

Right from the start, through their madcap videos, fizzing afropop and preppy attire, there’s been a Disneyish quality to Vampire Weekend. Gifted melodically and openly influenced by non-Western music, they sing of obscure grammar, foreign objects and social status, their records underpinned by a tremendous flair for rhythm. In Ezra Koenig, they’re fronted by a real-life Ferris Bueller, a Twitter wit and star of Instagram, who appeared in a recent episode of Girls as himself, a handsome twentysomething New Yorker wisecracking at a house party (Koenig has known the show’s creator Lena Dunham for years). They’re different – special, even – and they know it: when forming the band while studying at Columbia University in 2006, they composed a manifesto for the group that featured a rule stating that no member would ever be seen onstage or in the press wearing jeans or a t-shirt. Question Koenig’s regular Ivy League combo of polo shirt and chinos and he’ll gladly point out Ralph Lauren’s Polish-Jewish immigrant roots. If the hallmark of any great band is that they make what they do look effortless, then Vampire Weekend have barely broken sweat in the six years they’ve been in public.

By the same token, this is all ammunition for their detractors. Few bands in recent memory have polarised opinion quite like them. Perceived by some as privileged imperialists, smug purveyors of “Upper West Side Soweto” who holiday in the Hamptons, they were in danger of turning into a caricature; in terms of their clean-cut, primary-coloured Americanness, as fellow pop-realists they’d make an interesting subject for Jeff Koons. Had they continued in the vein of their self-titled debut and its swift successor (i)Contra(i), zipping through ska-infused synthpop and sugary teen-punk while dipping into Schott’s Miscellany for esoteric topics, chances are, as perfectionists, they’d tire from it sooner than us. In this respect, one of the reasons Modern Vampires Of The City is such a triumph – and it’s comfortably their most stimulating and rewarding album – is the sense that this ambitious band took their time to push themselves absolutely in order to make the record as thrilling as possible.

Viewed as the culmination of a trilogy, we find VW in reflective mood, taking stock of their achievements. Happy to be home after four years on the road, this is, loosely, a love letter to New York. The title of the album was revealed in the New York Times classifieds, and the city was foremost in Koenig’s thoughts as he wrote the lyrics. Easing off the reggaeton and calypso, the band pick up on styles closer to home such as gospel and country, which when added to Rostam Batmanglij’s dextrous arrangements, give these new songs emotional depth and a broader appeal while still possessing VW’s knack for startling pop hooks.

It’s revealing that they delayed the album for a year so they could polish and tweak the dozen songs until each one sparkles. “We really challenge ourselves to make sure the recording is as exciting as the songwriting, and vice versa,” says Koenig, and it shows. From the tick-tock of opening track “Obvious Bicycle” that leads to Koenig’s swooning chorus of “So listen/ Don’t wait” through to the Satie-like saunter and creamy harmony of closing number “Young Lion”, there’s not a dull moment. Particular attention should be paid to “Step” and “Diane Young”. The latter, a wild rockabilly shimmy, highlights their obsession with sound design to spice things up, with Koenig’s voice pitchshifted from Barry White up to Paul Simon, a trick employed later on to almost ludicrous effect for the chipmunk chorus of “Ya Hey”.

“Step” is notable not only because its origin can be traced retrospectively, via samples and covers, from New Jersey rapper YZ to hip-hop crew Souls Of Mischief to Grover Washington Jr and ultimately to Bread’s “Aubrey”, but because the band then weave a melody from “Aubrey” with their own composition that appears to blend Ravel with doo-wop. And if the music doesn’t seduce you, Koenig’s lyrics surely will. To select a few lines from “Step”: “Ancestors told me that their girl was better/ She’s richer than Croesus and tougher than leather/ I just ignored all the tales of a past life/ Stale conversation deserves but a bread knife”.

Koenig is on vintage form throughout. Whether you focus on a single line or attempt to unpick an entire song, there’s plenty to delight and confound. In “Hudson”, a spooked affair that dwells on the death of the 17th century British explorer Henry Hudson, he mentions a Euro 2012 quarter-final: “We watched the Germans play the Greeks”. Even with more traditional fare they keep things fresh. “Unbelievers” and “Worship You” might trespass on Mumford’s haybaled land, but soon a drunken saxophone wanders over the clattering rhythm of “Worship You”, while Koenig pokes the Lord on “Unbelievers”: “Girl, you and I will die unbelievers/ Bound on the tracks of the train”.

If in the past you’ve admired Vampire Weekend from a distance, this is the album that should have you falling in love with them. A more enjoyable pairing of words and music this year it’s hard to imagine.
Piers Martin