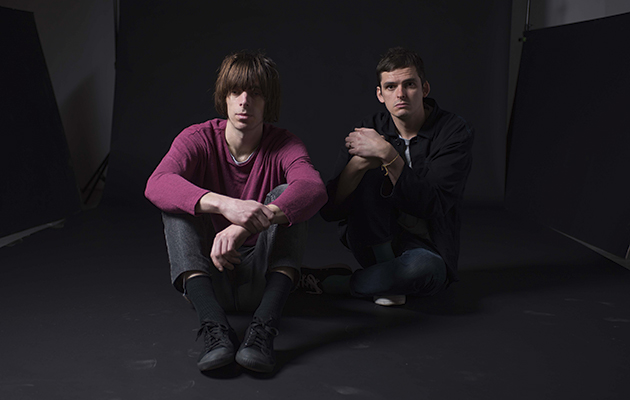 Based in southern Colorado, the Drop City commune of artists was one of many radical collectives that pockmarked both the cultural and geographical terrain of 1960s America. Set up by filmmaker Gene Bernofsky and several arts students, Drop City spent much of their time building habitable structures based on the revolutionary designs of Buckminster Fuller’s geodesic domes, all on the seven-acre plot of land they’d purchased, giving shelter to ‘drop outs’ from mainstream culture. It’s no surprise they were working around the same time the Woodstock generation was forming, wanting to ‘get back to the garden’, embracing both the mystical and the quotidian elements of nature.

In another artistic intervention, Drop City created wildly psychedelic paintings on acrylic, one of which, ‘Ultimate Painting’, inspired the London duo of James Hoare and Jack Cooper. It’s telling that “Lead The Way”, from Ultimate Painting’s third album, Dusk, features the lyric, ‘turn your back on society’ – they seem driven by a similar impulse to reduce and simplify. Both Cooper and Hoare have prior form in indie groups: the former with Mazes, and the latter with Proper Ornaments and Veronica Falls. If some of those groups access the creative energy of the ’60s through the refracting prism of ’60s independent music, Ultimate Painting return to the source direct, but they avoid the slavish copyism of any number of romanticising nostalgia acts, from Mod revivalists to limp psych-rockers, by tightening the focus, sketching the mise-en-scène with just the bare necessities.

Initial listens to Dusk, the duo’s third album, are similar to encounters with their other two (the self-titled 2014 debut, and last year’s Green Lanes); first impressions, of a muted slightness, give way to increasing wonder at the evocative qualities of the songs’ mindful minimalism. It’s uncluttered, spare, and open, and the production and arrangement has the feel of a group breathing together in the same room, capturing the recording space’s architectural and acoustic qualities, and playing only the essential notes, the better to let the room sing in tandem with the interactions between buzzing strings and humming valve amplifiers. It’s always telling when an album reads first as homogeneous, but calls for immediate repeat listening, as though you’ve been welcomed into a very unique psychological space by a set of songs that work their magic en masse.

It kicks off with deceptive diffidence – “Bills” comes across, at first, like a paper-cut version of the crystalline excellence of Television’s third, oft-underrated comeback album from 1992; it’s a nudge away from the latter’s “1880 Or So”. But it soon blossoms, finding its own community of sound, and quietly ascending into a mantric chorus, as a huffing organ buzzes out the back of the studio. The pointillism of the guitar playing is particularly seductive – one guitar trebly and warbled by tremolo, the other lightly distorted but still pin-sharp, their relationship is one of mutual fascination, tiptoeing around each other and respectfully finding ways to weave around each other’s tonal spectrum. The jangling charm of the following “Song For Brian Jones” hymns the titular character via guitars that toll in consort with the gentle psych-folk of The Byrds circa Fifth Dimension; “Lead The Day”’s chiming piano positions the gracefully understated melody on an early solo McCartney album.

If we’re naming the big names here, it’s because Cooper and Hoare have no qualms about drawing from some of pop and rock’s most canonical: as Cooper once said, “We accepted the fact that we’re influenced by the biggest bands that have ever been, because a lot of them are really good.” That kind of comfort with the canon is writ across Dusk, but it also risks games of spot-the-reference: it’d be pretty easy to draw a Venn diagram of, say, the gentler climes of psychedelic pop from the ’60s, the click and fizz of the quieter end of ’70s power-pop, and the pastoral lilt of the Flying Nun label in the ’80s, and locate Ultimate Painting at their intersection.

But there’s a surprising sturdiness of personality here. By minimising their arrangements, Ultimate Painting maximise the capacity for the warmth of their slyly observational songs to shine. On songs like “Who Is Your Next Target?” and the closing “I Can’t Run Anymore”, the moist melancholy of the album gives way to more intangible emotions, as though the duo are haunted by collective imaginings. It’s touches like these – the suggestiveness of the pauses, the silences, the miniature worlds between the painterly notes Cooper and Hoare play – that makes Ultimate Painting, for all its influences and its rear-view-mirror vision of classicist pop, such a seductive album.

Q&A
ULTIMATE PAINTING
I’ve always liked the reference to the Drop City commune in the group’s name. Can you explain the appeal of that era to you both?
Jack: Learning about Drop City struck a chord because society has moved so far away from that communal way of thinking and I think the early ’60s is so fascinating because everything was possible for such a tiny window of time. It was a glimpse into what might have been and I think that’s why people gravitate towards it.
James: The ’60s were such an intensely creative period. In seven years The Beatles went from “Besame Mucho” to Abbey Road. Everything moved forwards at such a high speed. The appeal of [the] decade is so strong for me. The quality of the music, the fashion, the cinema, Andy Warhol.

Your songs are minimal by design…
James: We have a clear idea of what works well… One of us will come with the main part of the melody/lyric but everything else is written/pieced together in my home studio in East London.
Jack: James talks a lot about ‘less is more’ and I’ll talk about ‘economy’ but it’s essentially the same idea. I think a lot of music needs to remember certain frequencies and simplicity. We record no more than eight tracks on tape… I don’t think the human brain can process a song that has hundreds of digital instrument tracks. I think there’s a simplicity to our recordings that resonates with people… There’s comfort in order.
INTERVIEW: JON DALE