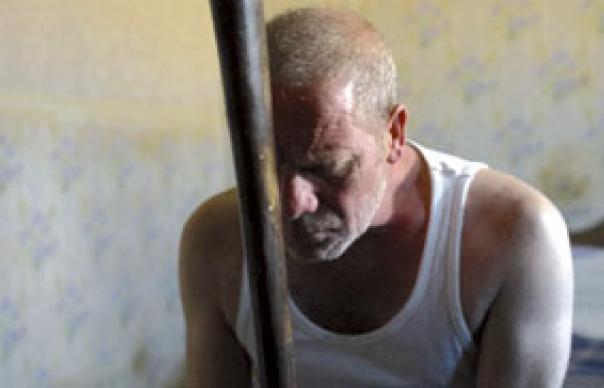 The inside of Joseph’s head is not such a pleasant place to be. We’re barely a minute into actor Paddy Considine’s first full-length feature and Joseph, played with scalding intensity by Peter Mullan, has made his way home from the pub, drunk and spewing profanities, and started taking his anger out on his dog. He instantly regrets the kick, but it’s too late for the animal. Considine, who wrote as well as directed, sets up Joseph as beyond redemption – “I’m not a nice human being,” he admits – and then tries to redeem him.

We’ve seen this kind of film before, of course. Pertinently, Gary Oldman, Tim Roth and Samantha Morton all chose tough domestic dramas as the subject matter for their directorial debuts. And as with Kathy Burke’s stunning performance in Nil By Mouth, Tyrannosaur has its own unexpected, piece of casting – Peep Show and Rev comedienne, Olivia Colman, as Hannah, an outwardly perky Christian charity shop manager who develops a friendship of sorts with Joseph. As the film gradually exposes the details of Hannah’s own life, we discover she’s locked in an abusive marriage to alcoholic husband, James (Eddie Marsan).

Considine – himself no stranger to playing characters with hair-trigger tempers for Shane Meadows – has adapted Tyrannosaur from his 16-minute short, 2007’s Dog Altogether, which starred Mullan and Colman in the same roles. It’s perhaps unsurprising that the strongest element of Considine’s film should be his work with the actors. Mullan and Colman, particularly, deliver complex and moving performances; the measured reveals behind Joseph’s own barrel of hurt are deftly played by Mullan. Other elements of Considine’s direction are solid but unremarkable, although his hand is less sure when it comes to the script. It also gives Marsan one of the most thankless roles of his career. He’s a self-loathing psychotic whose sustained physical abuse, it is obliquely suggested, has affected Hannah’s ability to have children. The same is true of James and Hannah’s neighbour Bod (Paul Popplewell), the belligerent owner of an out-of-control bull terrier, who regularly goads the dog into scaring his girlfriend’s young son. The outcome is grimly predictable.

There is much to commend Tyrannosaur: the performances, particularly. But the relentless suffering borders on the pornographic. And despite the strong theme of redemption, it offers very little in the way of light.
Wendy Ide