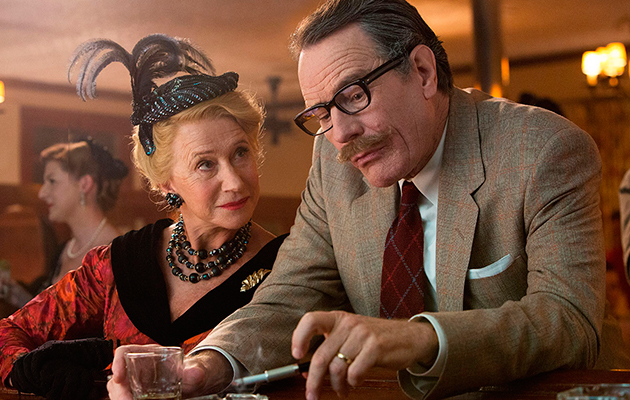 As a screenwriter during Hollywood’s Golden Age, Dalton Trumbo won Oscars for Roman Holiday and The Brave One; although he received no on-screen credit for his achievements until long after the fact. Trumbo was a member of the Communist Party and one of the ‘Hollywood Ten’, a group of screenwriters and directors who refused to testify before the House Un-American Activities Committee and were subsequently blacklisted.

As played by Bryan Cranston – in his first significant role since Breaking Bad finished – Trumbo is the dashing master of the bon mot. “Stop talking as if everything you say is going to be chiseled into stone,” says one exasperated fellow screenwriter. The eccentric Trumbo prefers to do his writing naked, in the bath, smoking and slugging whisky. But he is also a man of great principle, who faces down the ginormous John Wayne (David James Elliott) and poisonous gossip columnist Hedda Hopper (Helen Mirren), who are both staunch pursuers of the Red Menace.

Director Jay Roach and screenwriter John McNamara’s film runs from 1951 to 1970, covering Trumbo’s rise, fall and rehabilitation. Although its intentions are honourable, the film often slips into something more cartoon-y; more in keeping, perhaps, with Roach’s comedies like the Meet The Parents series, though not quite as slapstick as Austin Powers. Scenes where Trumbo and his fellow blacklisters churn out “shit for idiots” for ebullient B-movie producer Frank King (John Goodman) are a wheeze; but the lighthearted tone undermines the serious conditions under which these commissions were accepted. Although very good in the role, Cranston seems to be doing an impression – full of mannered tics. Roach and McNamara seem to misinterpret Trumbo’s eccentricities as defining character traits; accordingly, we rarely see behind the deft one-liners and well-chomped cigarette holder.

Around him, Goodman is terrific as King, who employs Trumbo to churn out “shit for idiots” during the blacklist; Michael Stuhlbarg as Edward G Robinson, an early friend and collaborator; Dean O’Gorman as Kirk Douglas, who hired Trumbo to write Spartacus, which hastened the end of the blacklist. Diane Lane is wasted as Trumbo’s wife. Meanwhile, Louis C. K. delivers a gentle and touching performance as fictitious screenwriter Arlen Hird that gives the film its emotional centre; though why Roach and McNamara needed to introduce a fictional character when there were so many interesting real ones involved in the story isn’t immediately clear.