The Coens – plus Jeff Bridges – take on John Wayne’s legacy. The result is a brilliant Western... 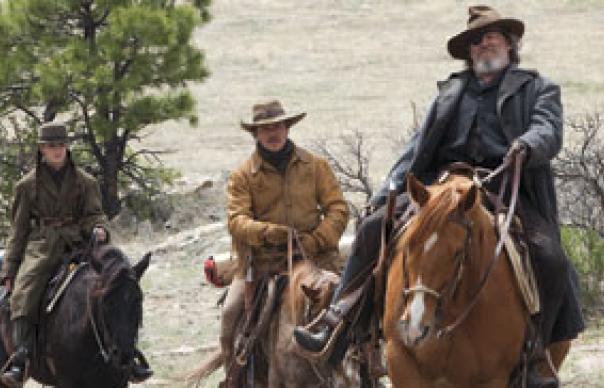 The new Coen brothers film is a remake of the popular 1969 Western that starred John Wayne as cantankerous, one- eyed US Marshal Rooster Cogburn, a role played here by Jeff Bridges. Wayne won his only Best Actor Oscar for his rowdy turn as Cogburn, playing the part broadly, cheerfully sending himself up. But this is very much Bridges’ carefully nuanced take on Rooster Cogburn, and he brings his own piss, vinegar and grumpy bluster to the part.

We hear plenty about Reuben Cogburn before we finally meet him. According to the sheriff at Fort Smith, Arkansas, Cogburn is “a pitiless man, double tough, fear don’t enter into his thinking”. But still, he “loves to pull a cork”.

Cogburn is being sought out by Mattie Ross, a 14 year-old girl who’s after retribution for her father’s murder – “robbed of life, a horse and two California gold pieces he carried in his pocket”. Mattie eventually finds Cogburn on the toilet.

Craggy and irascible, marinated in whisky, he sleeps in a rope bed in a room behind a Chinese grocery. “A love of decency does not abide in you,” were, we learn, the parting words of his second wife. As a US Marshal, he claims to have killed “12, 15, stopping men in flight or defending myself et cetera”, but the count is far higher. Jeff Bridges looks fantastic, incidentally. His Cogburn is a solid, meaty man, like an elderly grizzly bear, with his one eye blazing away from behind an impressively shaggy grey beard. Unlike Wayne’s burlesque take on Cogburn, there’s an undercurrent of darkness in Bridges’ performance; a cumulative sense of what he’s done and what he’s seen having taken its toll. Bridges has previously done much excellent work in Westerns – Bad Company, Rancho Deluxe and Heaven’s Gate among them. But the most pertinent here might well be Walter Hill’s tremendous Wild Bill, where he played James Butler Hickok with the kind of gruff intransigency he also displays as Marshal Cogburn.

Mattie hires Cogburn to pursue her father’s killer, farm hand Tom Chaney (Josh Brolin), who’s fled into Indian country, where the law at Fort Smith has no jurisdiction. “It will not be a daisy-picking expedition,” Mattie is told. So she also hires a Texas Ranger, LeBoeuf (Matt Damon, mercifully obliterating the memory of Glen Campbell’s wooden performance in the original), who’s been chasing Chaney himself for several months. LeBoeuf is pompous, condescending: “I have lapped filthy water from a hoof print, and been glad for it.”

The Coens are often drawn to such mismatched couplings – the Dude and Walter in The Big Lebowski, Steve Buscemi and Peter Stormare’s hitmen in Fargo, the triple bill of stupids in O, Brother, Where Art Thou?. And typically, they enjoy the friction between Cogburn and LeBoeuf as they head deep into the Choctaw Nation with Mattie in tow. It’s true, too, that the Coens have always made splendid use of language in their films – the regional dialects in Fargo spring to mind, or the rich Southern idioms to be found in O Brother… Here they roll around in Portis’ courtly, old-fashioned vernacular, particularly relishing the fractious back-and-forth between Cogburn and LeBoeuf. “I am a foolish old man,” howls Cogburn, “who has been dragged into a wild goose chase by a harpy in trousers and a nincompoop.”

The trek into Indian country moves into wild stretches of woodland and open plains experiencing the first dustings of winter snow – all beautifully shot by the Coens’ regular cinematographer Roger Deakins in earthy, rustic tones. There’s an unsettling encounter with a man dressed in a bear skin who practises dentistry for the Indians, and a fatal one with two outlaws holed up in a shack, before they finally catch up with Chaney. He has taken up with ‘Lucky’ Ned Pepper (played with admirable menace by Barry Pepper, channelling Robert Duvall in the 1967 original) and his gang – “a congress of louts” with impressively bad teeth. Inevitably, this is where we finally learn who really has true grit.

In many ways, True Grit might appear to be an unusually straight-faced genre exercise for the Coens. If their Oscar winner No Country For Old Men felt like a contemporary Western, then True Grit seems very much the real deal, with the high country locations redolent of, say, Anthony Mann’s films. Conspicuously, there is none of the brothers’ usual up-ending of their chosen genre – none of the sly spin they brought to, say, film noir in Miller’s Crossing or vintage screwball comedies in The Hudsucker Proxy. The film has the Coens’ wintry humour, sure – but that was always a major attribute of Portis’ novel. If anything, True Grit feels very much part of the Coens ongoing exploration of times and places in American history. And, as with Marge Gunderson in Fargo, the Coens locate at the heart of True Grit a feisty, morally upstanding female character.

Hailee Steinfeld is tremendous as the tenacious Mattie – “You give very little sugar with your pronouncements,” LeBoeuf admonishes her rather sourly. “I admire your salt,” she is told approvingly elsewhere, and you certainly have to give props to a character who spends one night early on in the film sleeping in an undertaker’s office surrounded by corpses: “I felt like Ezekiel in the valley of dry bones,” she admits unwaveringly. Matt Damon is equally fine here on his first outing for the Coens. “Never doubt the Texas Ranger, ever stalwart,” he crows. But the peacock preening aside, Damon gradually, unshowily reveals LeBoeuf to be a staunch ally for Mattie and Cogburn.

Of course, you may conclude that True Grit is really about Jeff Bridges, giving another peerless performance for the Coens – his first since The Big Lebowski. It’s true enough that Bridges is currently enjoying a long-deserved purple patch – his Oscar for Crazy Heart last year, while last month, incredibly, he toplined a major studio blockbuster, Tron: Legacy. Without sounding churlish, one invariably wishes these successes had come instead for many of the frankly better films he’s made in the past 40 years. But certainly, with True Grit he’s done great work in a great film. When we see Cogburn in full flight – riding against four armed men – this is rousing stuff. You’d like to think the Duke himself would be applauding the Dude from afar.
MICHAEL BONNER