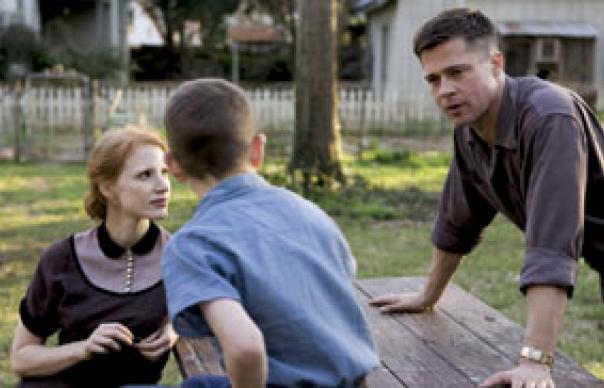 The long-awaited new film by Terrence Malick is the most outright love-it-or-hate-it phenomenon to emerge from a major American director in living memory. Although it was awarded this year’s Palme d’Or at the Cannes Film Festival, Malick’s The Tree Of Life is a polarising experience all the same. While it’s hard not to be bowled over by its immense ambition, it’s difficult to connect with a film that’s so unambiguously religious. As to whether or not it works, that’s like asking whether Chartres cathedral works. You really have to acknowledge its scale and significance and start from there.

At its simplest, The Tree Of Life is about an American family, the O’Briens, from the middle of the 20th century to the present day, and how the dramatic events of the past can still cause aftershocks decades on. Sean Penn, in a pivotal though slight role, appears as a successful businessman, Jack, who finds himself remembering his childhood in the family home in smalltown Texas, with Mr O’Brien (Brad Pitt), Mrs O’Brien (Jessica Chastain) and his two brothers. Very early in this fragmented, hyper-sketchy narrative, Mom receives word that one of their sons has died – presumably in Vietnam, though it’s never made clear. As Malick jumps around in his chronology, we find out more about the O’Briens’ life, a mixture of everyday joys and sorrows – the latter caused partly by Mr O’Brien’s brusque, authoritarian manners.

In fact, if Mr O’Brien represents the earthbound tendency in the family, Mrs O’Brien embodies humanity’s connection with grace – so much so that, in one shot, she’s seen levitating. Meanwhile, Malick represents the ineffable mystery of creation in a grandiose – sometimes dazzling, sometimes bewildering – stream of imagery. He takes us into volcanoes, under oceans, even to primeval beaches and forests where a plesiosaur faces its predator. At times, this resembles nothing less than an insane mash-up of Jurassic Park and Norman Rockwell. Then there are repeated glimpses of a trembling sheaf of light that, if you were so inclined, you might think of as the spark of Creation – or perhaps some sub-atomic phenomenon. One thing you can say about The Tree Of Life is that it makes a bold attempt to reconcile religious imagery with the demands of hard science.

Brad Pitt anchors the film as the loving, but often terrifying paterfamilias. O’Brien is a complex character – he’s a devout man, yet he aspires to wealth. An engineer who invests the family’s savings in patents, he’s also a failed musician. He is a man filled with frustrations and contradictions. Jessica Chastain’s character, however, is too transparently airy to transcend her status as the eternal material archetype. Penn, on the other hand, wanders in and out looking careworn as he contemplates monumental urban architecture – dehumanised hell on Earth, or the modern incarnation of the ageless symbolic Tree that’s glimpsed throughout? Penn is also at the centre of the film’s most questionable dream imagery, which suggests that when you go to heaven you get to hug everyone you ever knew. On a beach.

At its least convincing, Malick’s film is an overblown philosophical folly. But few mainstream films are so ambitious, so downright symphonic in their scale – not to mention so defiantly anti-narrative. There’s certainly something uncomfortably overbearing about the film’s constant need to declaim “Behold – the Miracle of Creation!” The result can feel like an evangelical sermon on an IMAX scale. For better or worse, though, The Tree Of Life pushes American cinema into regions uncharted since Stanley Kubrick’s heyday.
Jonathan Romney