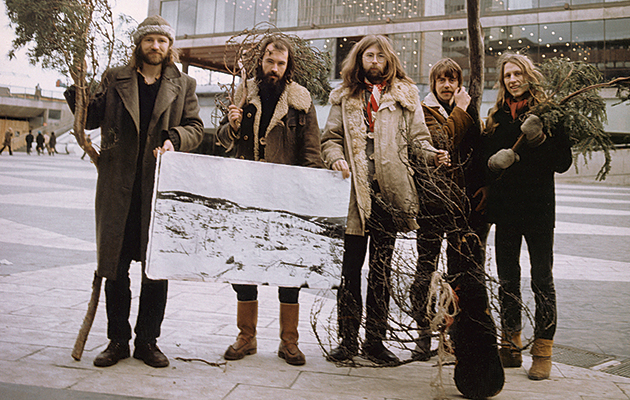 One of the key groups from the Swedish free music counterculture, Träd, Gräs Och Stenar’s history is complex, but tracing their narrative is essential to anyone getting to grips with the Scandinavian underground. They first came together as Pärson Sound, whose music, performed at Free School happenings and experimental art festivals, revealed a heavy totality, predating the free-rock of groups like The Dead C. From there, they shape-shifted through various other collective projects – as International Harvester, they released Sov Gott Rose-Marie in 1968, and then, the following year, as Harvester, the lovely Hemåt. Their fourth mutation, Träd, Gräs Och Stenar (Trees, Grass & Stones), was by far the longest-serving, and the one that worked hardest to realise the collective’s early aims, as articulated by organist Torbjörn Abelli: “how could one find a music with potential to transform the sense, a music that could make way for the new world order?”

This boxset contains their two, self-released live albums – 1971’s Djungelns Lag (The Law Of The Jungle) and Mors Mors (Mother Mother), from 1972 – along with a third double-album of previously unreleased material, Kom Tillsammans (Come Together), drawn from archival recordings of early ’70s performances. To be fair, it’s hard to peg the unreleased material as revelatory in any real sense: it’s more of the same, but with a group who pinned their aesthetic to the ever-changing singular, these newly unearthed live tapes confirm that the startling quality of Träd, Gräs Och Stenar’s music was not a construction of judicious post-performance editing – they naturally played at such a level.

You could make comparisons with the Grateful Dead, perhaps, as good parts of Träd, Gräs Och Stenar come across like the Dead just before they get truly gone: Träd, Gräs Och Stenar never quite enter the rudder-less zones of, say, “Dark Star” at its most elliptical, but the way the group’s guitars wrestle with each other – quietly, slowly, winding around each other like DNA double helixes – can feel like Garcia and company either working to a head, or unspooling from a peak moment. This only makes Träd, Gräs Och Stenar more compelling: it’s as though the group are collectively holding a moment, looking at it from all angles, letting light refract from the prism with multi-hued force. It’s a great example of ‘free festival’, traveller psych-rock, totally absorbed by and in thrall to the moment, heading toward the no-mind and fully intent on getting there.