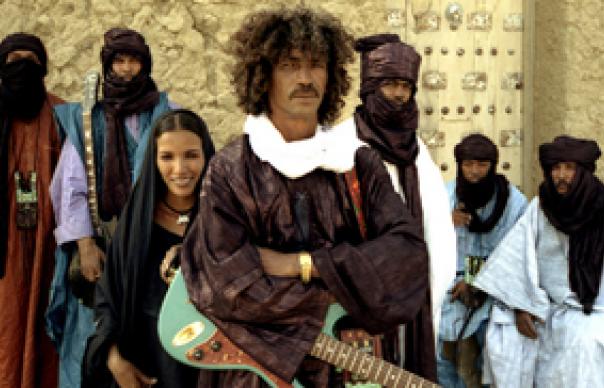 When they first formed in the Libyan guerilla camps of the late ‘70s, Tinariwen referred to their music simply as “guitar”. And no wonder. Electric guitars in the North African desert sound different from ordinary electric guitars. Like the bluesy modal drones of the late Ali Farka Touré, Tinariwen’s guitars are crabbed, dusty, skittering around single bleak chords.

On Aman Iman the guitars almost seem to chatter, the notes tight and clustered as they intertwine with undulating Arabic vocal lines and chant-like backing choruses. Producer (and Robert Plant sideman) Justin Adams, working again at Bamako’s Bogolan studio, captures Tinariwen in the raw – a minimalist collective playing a kind of lo-fi funk that’s both sleepy and at times jarringly jerky. “Ahimana” and “Awadijen” sound almost wrong to first-world ears, so weird are their lurching beats.
“63” is as austere and undercooked as pre-war delta blues – you could trace a line from Africa to The White Stripes via John Lee Hooker and the Stones’ “Shake Your Hips”. On “Assouf”, the band push the envelope and run a guitar through a wah-wah pedal. Handclaps and ululations feature throughout.

As you might infer from its title, the album’s themes are broadly concerned with the realities of heat and aridity, along with the semi-nomadic existence of the Touareg people. The militancy of the band’s early (and outlawed) cassettes may be less in evidence, but the constants of thirst and emptiness remain. “Water is life,” say the Touareg, “and milk is survival” – a perfect message for our overheating planet.

From Robert Plant and Thom Yorke to anyone who dug the turban-bedecked troupe on Later with Jools Holland back in 2004, many are the English patients who’ve succumbed to the hypnotic mystery of Tinariwen’s sound. Now signed to Andy MacDonald’s Independiente – home to Embrace and Paul Weller – this extraordinary band are clearly pushing for more than cult world-music status. They fully merit it.