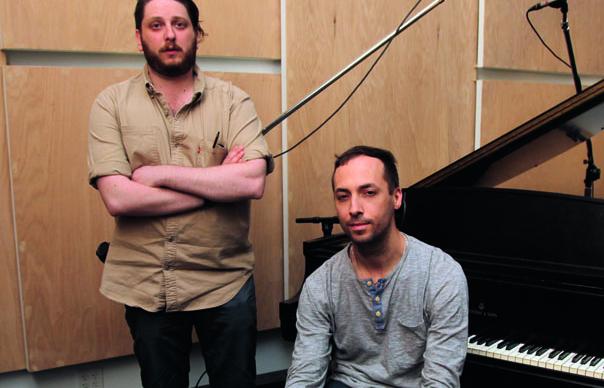 In an early interview Daniel Lopatin, aka Oneohtrix Point Never, attributed his hermetic sonic obsession and reluctance to play in a band to megalomania. Listening to the reticent cosmic melancholy of his music – most famously his “echojam” “Nobody’s Here”, which spliced an ectoplasmic sliver of Chris De Burgh’s “The Lady In Red” to a pixilated clip from an old Mario Kart game – you might have taken that confession with a cellarful of salt. Nevertheless since 2009’s compilation Rifts brought his work to a wider audience, he’s got into the (altered) zone, and is now shaping up to be hardest working man in dronebiz. In the past year alone he has launched his own label (Software Recording Co.), overseen the release a series of EPs and singles, edited a zine (Cool Drools), worked on an EP of remixes of his 2011 album Replica, produced a split album with Rene Hell and, at the behest of Saatchi and Saatchi, written a score for a robotic flying circus.

Lest he be accused of resting on his laurels, his latest brainwave is SSTUDIOS, which promises to be a series of electronic collaborations, inaugurated with this jam with Canadian cosmonaut Tim Hecker. If Lopatin has been crowned the philosopher king of a certain strain of peculiarly Brooklynite new wave of new age – divining YouTube satori in nuggets of 80s MOR, paying more extensive homage to mid-80s synthpop with his label partner as Ford and Lopatin – then Hecker represents a more sober tradition: lecturing on sound art, releasing albums through venerable postrock and electronica labels like Kranky and Mille Plateaux, recording thoroughly conceptualised suites (2011’s RaveDeath, 1972 was based around field recordings of a pipe organ in a church in Rekyjavik). The combination of the two promised a novel double-act, sacred and profane, of sonic mysticism. For this collaboration though, they left preconceptions at the door to “embrace the tropes and techniques of jazz-based improvisation”.

Nevertheless, a concept of sorts seems to have emerged. Instrumental Tourist is apparently based around the “acoustic resonance of digitally sourced ‘Instruments Of The World’” – and sure enough tracks like “Racist Drone” and “Grey Geisha” bear the trace of digital approximations of Andean pipes or Japanese koto. The title of the track “Whole Earth Tascam” – like Art of Noise’s “Moments In Love” being slowly lowered into an abyss – is suggestive. In 1966 Stewart Brand campaigned for NASA to release the first satellite photo of earth, in the hope that it might generate a heightened sense of the wonder and fragility of the planet. A lot of Instrumental Tourist, then, might be an attempt to imagine a sonic equivalent of that picture – a kind of cosmic take on Jon Hassel’s “fourth-world music”, conjured from the ethnomusical MIDI kitsch – from urban cacophony (the industrial glitch and sigh of “Uptown Psychedelia”), through mid-ocean calm (“Grey Geisha”) to radiophonic rainforest polyphony (“Ritual For Consumption”).

However, as sublime as much of Instrumental Tourist is, it rarely fulfills that promise of improvisation, of a real sonic engagement or play, and struggles to exceed the sum of its parts. You could reasonably identify individual tracks as bearing the fingerprints of each auteur – Hecker’s electroacoustic signal decay on “Scenes From A French Zoo”, Lopatin’s loopy bliss on “Whole Earth Tascam” – so much so that it might have easily been promoted as split release without anyone being the wiser. Instrumental Tourist ventures into few new territories then, but, as another edifice in Lopatin’s increasingly imperial ambitions, for now it will do nicely.
Stephen Troussé

Q&A
Daniel Lopatin
Have you been a fan of Tim’s work for a while?
For sure. I first heard Haunt Me, Haunt Me in the early 2000s, and then caught him later on doing a gig at Harvard sometime circa 2005. He was doing a max set with contact mics in his mouth and managed a completely romantic set with none of the oblique signifiers I was typically accustomed to. His sense of melody was singular.

What impressed you about his solo records?
His ability to extend and criticise the “ambient” frame through a uniquely sculptural and personal sound, but something ineffable as well. His music always reminded me of Rodin’s engorged, twisted bodies in motion.

What surprised you about working with him on this record?
His technical rigor was surprising because I had kinda pinned him as a melody guy. His fader mix style is super musical and was a pleasure to watch; it was like being at a live surgery demonstration.

The title “Whole Earth Tascam” is suggestive of the 1970s Whole Earth movement. Are you nostalgic for that optimism?
No, but I’m not a nostalgic person by nature. Like most of the titles we are often makng reference to the impossibility of their conceits, and the bravado involved therein.
INTERVIEW: Stephen Troussé