Hit the Norse! Latest comic book adapation, about a man and his hammer. 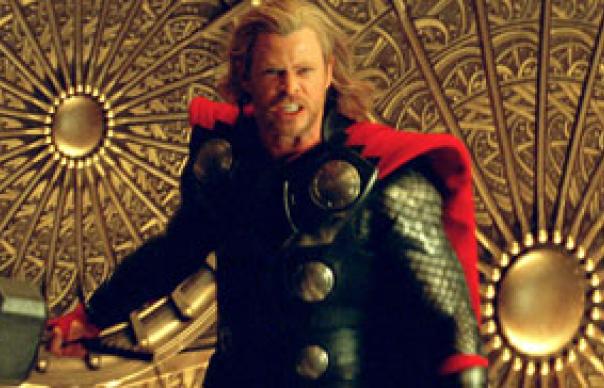 What to expect, then, from Kenneth Branagh’s take on Thor, Marvel Comics’ spin on the mighty Norse god of thunder? Richard Briers cameoing as a kindly, twinkle-eyed retainer, perhaps? Or Robbie Coltrane as a humorously rotund demi-god, with a winning line in bad puns and comedic asides?

In truth, Thor could do with a little more of this kind of off-piste thinking. It’s deathly long, it struggles to be coherent in places and, at times, it’s really just like the last superhero film you saw, but with slightly different costumes. Oh, and it’s in 3D. But then these days, what isn’t?

Certainly, Kenneth Branagh seems to be an unusual choice to direct a superhero movie. But then, you could argue that Thor is the odd-one-out in the Marvel Comics‘ cannon. He isn’t the regular guy, struggling to come to terms with new-found superpowers – the template for most Marvel protagonists. He’s the son of Odin One-Eye, the All-Father, head of the Æsir – a race of gods who watch over the Nine Realms from their home on Asgard.

As you might expect, when Anthony Hopkins (replacing Brian Blessed) arrives sporting a flowing white beard and bellowing heartily as Odin, Thor strives for the kind of sub-Shakespearean gravitas that Hollywood demands accompanies all on-screen portrayals of ancient deities.

A variety of actors – some of them known to us, like Idris Elba, The Wire’s Stringer Bell – appear dressed in colourful body armour declaiming wildly. Fortunately, no-one forsooths. While the splendour of Asgard is realised via typically accomplished special effects – the Bifröst bridge that links worlds, particularly, has requisite wow-factor – you can’t but help feel that in some respects this city of gods resembles nothing more out-of-this-world than a high end hotel complex in Dubai.

It’s only when Thor is banished to Earth, and befriends scientists Natalie Portman and Stellan Skarsgård, that Branagh’s film finally reveals its charms.

Looking more like a bearded, long-haired surfer dude than a Norse god, Chris Hemsworth’s Thor strides manfully at one point into a pet shop and pompously demands a horse. It’s camp-y, fish-out-of-water fun, and offers some diversion from the generic CGI battles between the Æsir and the evil Frost Giants of Jotunheim, or Thor and an enchanted suit of armour called The Destroyer. He spends much of his time on Earth trying to retrieve Mjölnir, his hammer and the source of his powers. The central conflict, though, lies between Thor and the god of mischief, his brother Loki (Tom Hiddleston, a veteran of Branagh’s Wallander series). Hiddleston does sly and manipulative with relative restraint, that balances out Hemsworth’s shouty braggadocio.

But, really, it’s all about a bloke and his hammer.
MICHAEL BONNER