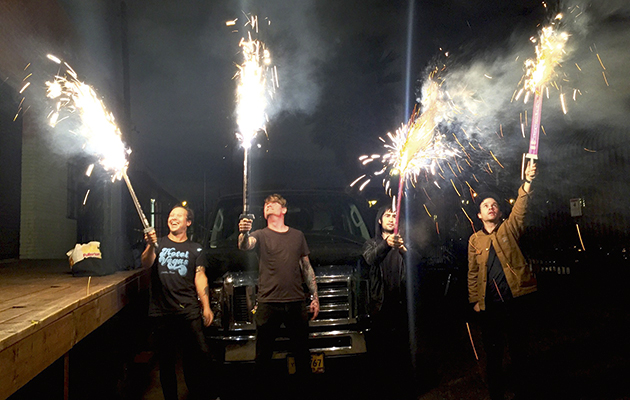 If there’s a single thread that ties together the many records and overlapping lineups of Thee Oh Sees – other than the presence of founder, songwriter and garage rock talisman John Dwyer – it’s the constant, agitating need for evolution, as Dwyer filters his current musical obsessions through Thee Oh Sees’ sinister psych rock template. There’s also a sense of restless unease that pervades everything Dwyer works on, either with Thee Oh Sees, solo as Damaged Bug, or via his own record label, the reliably out-there Castle Face.

Thee Oh Sees are always the same but different, drifting through genres before twisting them out of shape, from the bubblegum of Castlemania to the metal-tinged Floating Coffin. On A Weird Exits, they do this more successfully than ever before, with Dwyer taking the band into pulsing dance rhythms and Krautrock as he explores the rich, crackling rhythmic potential of the group’s new two-drummer lineup.

This most clearly manifests itself on third track “Jammed Entrance”, a wicked instrumental that enters on a flurry of electronics, a warped, back-looped sense of “Tomorrow Never Knows” disjointedness that soon develops into a rhythmic jam, with spacey drums, flickering synths and a rippling melody. It’s pretty intense, but nowhere near as claustrophobic as the usual Oh Sees experience. A Weird Exits has an immediacy and coherence that was missing on previous outing, 2015’s Mutilator Defeated At Last – a fine album, but not as hooky as this one. More than that, it’s also strangely light – the sound is just as malicious and serrated, but it’s all a little more spacious, as if a veil has been lifted. Tracks like the Eno funk of “Unwrap The Fiend Part 2” and “Crawl Out From The Fall Out” diverge from the band’s usual oeuvre, the latter almost verging on the orchestral but still wedded to a winding, serpentine rhythmic sense. That comes from Dwyer’s increasingly beat-focused listening tastes and also the new lineup of twin percussionists Ryan Moutinho and Dan Rincon, who have opened up a new line of attack, bringing a touch of James Brown and even Ornette Coleman to the show.

As Dwyer insists, the album still has plenty of “face-fuckers”, though these are front-loaded to the first half of the album. They include fuzzy, demonic garage rockers like the feral “Gelatinous Cube”, with ear-burning guitar and Dwyer’s vocals at their most sinister, or the single “Plastic Plant”, taut and freaky, with all the changes of pace and grotesque architectural flourishes of a typical Oh Sees song, albeit now with the twin drummers giving the guitars as good as they get. The album’s opening two songs demonstrate the ensemble’s prodigious swing and power, springing spaniel-like into life with the bouncy percussion of “Dead Man’s Gun”, a fluid thrasher that features Dwyer whooping with delight before each skronky guitar solo. “Ticklish Warrior” is a grungy number locked to a spiralling groove, and features a rumbling guitar solo that comes in like a lawnmower and goes out like a foghorn.

Although the album only has two instrumentals – “Jammed Entrance” and “Unwrap The Fiend Part 2” – identifiable lyrics play second fiddle to tone of voice throughout A Weird Exits. “Unwrap…” itself is almost like Thee Oh Sees in easy listening form, a chewy march that has the same rippling feel as “Jammed Entrance” but this time played out in slow motion. It’s followed by “Crawl Out From The Fall Out” (Dwyer excels at giving songs tangible, evocative, almost onomatopoeic titles), the longest track on the album and also the most unexpected – a real catalogue curiosity that opens with a pitter-patter of cymbals, before what sounds like an oboe takes things steadily, ominously forward. It’s a piece that has the feel of a chamber orchestra rather than a garage rock band, lasting eight gentle minutes with a translucent vocal and melody that seems to be pinched from “Chariots Of Fire”.

The album’s downbeat second half is finished off by the regal “The Axis”, a wave of stuttering noise anchored to a fat organ sound. It almost sounds like Fleetwood Mac, with Dwyer affecting an unusually pompous vocal while firing out bluesy notes, until the whole song collapses in a joyous wall of fuzz and explosions, as if Dwyer was gleefully blowing up the bridge to his past in preparation for his next assault.

Q&A
John Dwyer
What was the guiding principle with this album?
We have been letting the songs take us where they will. A lot of the songwriting was driven by endless horrible acts in the world perforated by moments of beauty. We wrote a lot of this album as a band, so it has a sort of togetherness maybe less present in previous releases.

What are the benefits of recording with two drummers?
You get a full stereo atmosphere. Dan and Ryan couldn’t be more different as drummers yet they complement each other really nicely, so everything falls into place when we get in the studio. We have practised a lot and written a lot – it’s been a fruitful year in that respect.

There are some surprisingly mellow songs on the album…
I wouldn’t call it mellow so much, but the album definitely has its ebb and flow to it. The last two tunes are a bit on the down-tempo, but I’d say there are definitely a few face-fuckers here as well. The session produced a lot of songs, some of which seemed to not need vocals but instead had more texture.

What about the dancey aspects?
Overall, I’ve been getting deeper and deeper into repetition and beat, hence the two drummers I guess. I’ve been listening to ’70s Kraut, prog and old electronic music, which definitely pulls from Afrobeat and other dancier counterparts. I’ve always been fond of dance music so really I guess it was a matter of time before we morph towards that. Kinda weird coming from a guy who don’t dance.
INTERVIEW: PETER WATTS