The Three Burials Of Melquiades Estrada 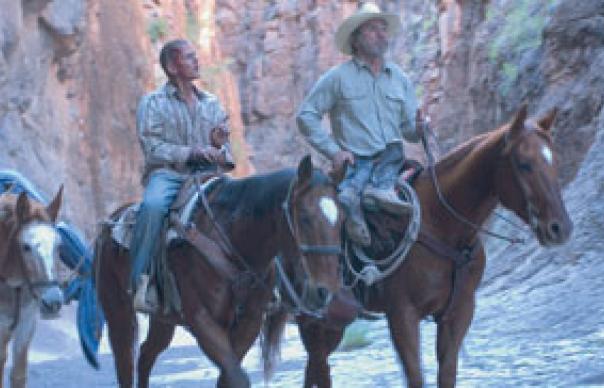 Released hot on the heels of Brokeback Mountain, Tommy Lee Jones’ directorial debut offers further proof that the Western’s alive and kicking its spurs. Despite its contemporary setting, it plays by genre rules more respectfully than Ang Lee’s movie, its story of injustice, homicide, revenge and honour evocative of Peckinpah’s death-drenched Mexican masterworks The Wild Bunch and Bring Me The Head Of Alfredo Garcia.
If not for screenwriter Guillermo (Amores Perros) Arriaga’s characteristic non-linear structure, the story might seem a straightforward chronicle of the determined quest of the victim’s boss and friend, Pete Perkins (Jones, in a Cannes prize-winning turn) to see justice done by the killer. Instead, the movie flashes back from the discovery of a shallow grave in the West Texan desert to scenes showing how Mexican ranchhand Estrada’s ended up dead and buried. But then the film is less concerned with plot than with place – the dusty townships down by the Rio Grande, home to desert rats, cattlemen and their bored wives, ‘wetback’ workers like Estrada, and border patrolmen – character and questions of morality. And in each regard it rings beautifully true.

As such, it reflects upon the inequality, racism, suspicion and misunderstanding that marks US-Mexican relations; at the same time, however, it remains a stirring tale of friendship, obsession and unlikely redemption, played to perfection by all concerned (Barry Pepper and Melissa Leo lending Jones especially sturdy support) and shot by our very own Chris Menges as if he’d been raised on tequila from birth. As Perkins takes the law into his own hands and leads a man he deems guilty into the hellish desert, hauling a corpse along for the ride, you begin to wonder where his crazy quest will end. It’s to Jones’ and Arriaga’s credit that they keep us guessing all the way, and provide a resolution as surprising as it’s deeply satisfying.