The Shape Of Water 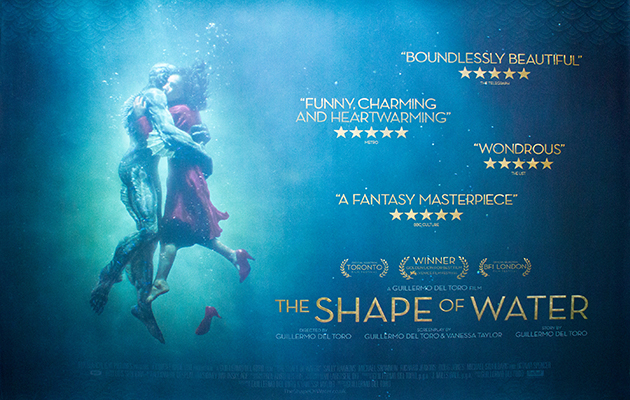 Since his 1993 debut, Cronos, the filmmaker Guillermo Del Toro has specialized in fantastical creations. A mysterious device capable of dispensing eternal life; a lonely ghost boy; a mysterious faun creature; alien sea monsters from another dimension… For The Shape Of Water, Del Toro gives us yet another aquatic marvel – this one more benign than the Kaiju who wreaked global havoc in 2013’s Pacific Rim. The Shape Of Water introduces us to an amphibian-humanoid creature (Doug Jones), hailing from the Amazon, who is captured and brought to a secret facility near Baltimore during the height of the Cold War. There, a cabal of American military and scientific minds believe he will prove an invaluable asset against the Russians. What no one counts on is that the creature will fall in love with one of the cleaning ladies at the facility; Eliza (Sally Hawkins).

Aside from its obvious antecedents in 1950s sci-fi monster movies, Del Toro’s film plays as an open love-letter to cinema’s wider range. Eliza and her neighbour, Giles (Richard Jenkins), live above a cinema that plays films to empty houses. A black and white fantasy song and dance sequence wouldn’t look out of place in one of the MGM musicals Giles devours. Eliza herself has a namesake in Pygmalion/My Fair Lady’s Eliza Doolittle. Events in the shadowy Baltimore facility, meanwhile, are redolent of Cold War-era noirs – complete with Russian spies and buzz-cut five star generals. But while Del Toro’s flight of fancy is fully formed, it is abutted by the real world – racism and homophobia are evidence of a particularly closed mindset. As with many of Del Toro’s characters, Eliza seeks escape – which her new, fabulous beau offers. What could be Amelie-style tweeness is invested with warmth, beauty and a surprisingly deep emotional richness.