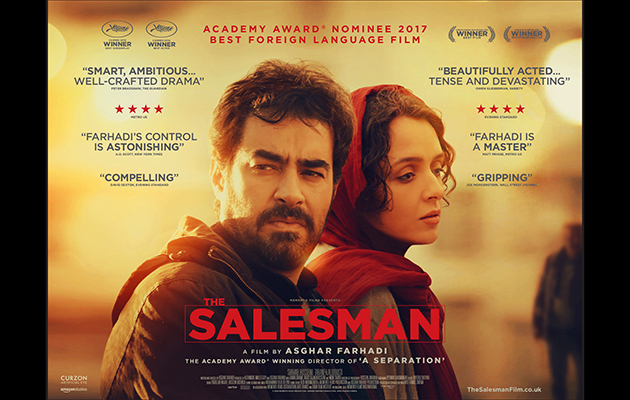 In Asghar Farhadi’s latest film, events happen quietly but with devastating effect. The film opens with what seems like an earthquake. The Tehran high-rise apartment block where Emad (Shahab Hosseini) and his wife Rana (Taraneh Alidoosti) live begins to shake; a huge crack appears in their bedroom wall. Emad and Rana are obliged to relocate accepting the offer of another apartment, loaned to them by a friend. This is here where Farhadi’s film really begins. An assault takes place and Emad finds himself weighing up his response.

To call The Salesman a revenge film is a little disingenuous: it is concerned with how one shocking incident – malicious, unexplained – can upend the comfortable existence of this middle-class couple. In that respect, it has echoes of Michael Haneke’s films like Funny Games and Cache, which also dealt with the violation of middle class homes and a rising tide of catastrophe.

The Salesman has brought Farhadi his second Academy Award for Best Foreign Language Film, after 2012’s A Separation. It has been similarly garlanded at festivals, including Cannes where Hosseini won Best Actor. His Emad is a well-liked teacher at a local high school and along with Rana he is starring in an am-dram production of Arthur Miller’s Death Of A Salesman. Emad’s transformation into reluctant vigilante feels less about seeking retribution for crimes committed than it is about injury sustained to his own male pride.

Alidoosti’s Rana, meanwhile, is central to Farhadi’s tale of crime and punishment. Her own torments are deep. The crack on the bedroom wall becomes a stinging metaphor for the fissures running through her and Emad’s own relationship.