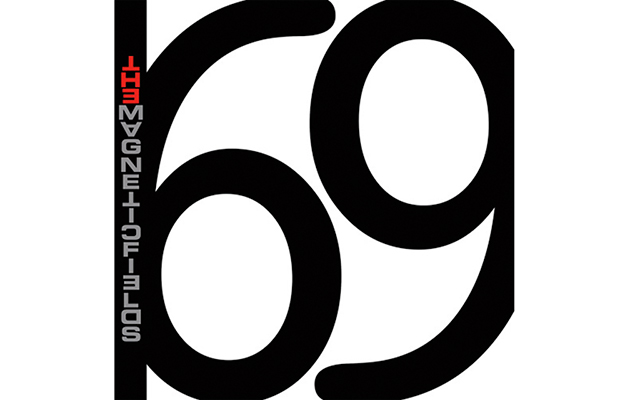 Pop history is not littered with classic triple albums. All Things Must Pass and Sandinista! are solid doubles with bonus tracks already appended. Yessongs and The Last Waltz are compendious souvenirs of epic live performances. More recently, Joanna Newsom’s Have One On Me, at a mere 18 songs, sprawls rather languidly across three discs.

Which makes 69 Love Songs, Stephin Merritt’s magnum opus, now satisfyingly reissued on vinyl, a singular achievement. Approaching three hours of music, it amounts to a perverse, secret history of popular song, as viewed from late-20th-century lower East Side Manhattan, and was seen by many, on its release in September 1999 as a fantastical fin-de-siecle folly. The Village Voice’s Robert Christgau, in a moment of acuity, dispatched an earlier Magnetic Fields album with the apercu “more songs about songs and songs” – an assessment Merritt himself appreciated. “69 Love Songs is not remotely an album about love,” he said. “It’s an album about love songs, which are very far away from anything to do with love.”

So how has this brazenly self-conscious, self-promotional display of cleverdickery, endured over the last decade and a half? I admit to having little perspective on this: in our household, 69 Love Songs is as ubiquitous as ABBA Gold. If you were to run the metrics on my personal listening over the last 15 years, aggregate the car journey soundtracks, the iPod hours, the late-night singalongs and Sunday morning Spotify sessions, I’d wager that these songs would top my own 21st-century pop charts.

Merritt’s gambit is that this exegesis and elaboration can be every bit as entertaining, amusing and even affecting as the most heartfelt performance of “authenticity”. “The book of love is long and boring…” Merritt croons on what’s become the album’s break-out pop hit and one of the many self-referential mini-manifestos. In practice, and after all these years, 69 Love Songs, is anything but.

It’s cliché to say that cynicism, irony and self-conscious sophistry are the barbed wire and booby traps protecting a sentimental heart. But you don’t have to dig too deep into 69 Love Songs to find staggering works of genius heartbreak. Two songs in, “I Don’t Believe In The Sun” could be an Elton John song – if Elton ever fancied adapting Robert Burton’s Anatomy Of Melancholy into a jukebox musical. It’s followed by “All My Little Words”, one of the ripest numbers on the collection, a kind of cut-glass Appalachian folksong, sung by LD Beghtol as though he were Oscar Wilde on his 1882 lecture tour of the US Midwest. It’s also, Merritt says in the sleevenote interview with Daniel Handler, one of the “true” songs – that is, it describes a moment in a “real” relationship, with someone who describes themselves as “unboyfriendable”. By overloading the song with ornate metaphor (“You are a splendid butterfly”), by giving it to Beghtol to sing, there’s a fascination with a kind of musical alienation technique, seeing how far he can push the song and have it still remain… touching. As Roland Barthes wrote in A Lover’s Discourse (a kissing continental cousin of 69 Love Songs), “To try to write love is to confront the muck of language; that region of hysteria where language is both too much and too little, excessive (by the limitless expansion of the ego, by emotive submersion) and impoverished (by the codes on which love diminishes and levels it).”

69 Love Songs is an austere cabaret, closer to Brecht than Rufus Wainwright, but for some people, the excess and hysteria, the “Busby Berkeley Dreams” of it all, is clearly too much. In one of the great modern instances of missing the point, novelist Rick Moody determined in 2003 to winnow out all the “show tunes” and cut the collection down to 31 Love Songs, to demonstrate that somewhere inside the profusion of the three discs there was a pretty tight new wave rock album trying to get out. This is rather like insisting the construction of the Eiffel Tower is a tad too ostentatious, and would have been better off aspiring to a nice modest 300 feet.

It also fails to recognise that 69 Love Songs, is, among other things, an acute piece of anti-rockist music criticism. Merritt has always maintained that the genre he is happiest working in is “variety” – that is, the full sweep of pop, from jug band blues (“Xylophone Track”) to cheerleader songs (“Washington DC”), from wartime waltzes (“The Night You Can’t Remember”) to magical realist Highland murder ballads (“”Wi’ Nae Wee Bairn Ye’ll Me Beget”). Which isn’t to say that (a certain kind of soft) rock is beyond him: “No One Will Ever Love You” is an immaculate distillation of imperial-era Fleetwood Mac into three minutes. Just that it’s no longer the centre of the musical universe – rather simply another satellite of love in Merritt’s rich conceptual orrery.

Before 69 Love Songs, Merritt was known, if at all, as a composer of depressive, fabergé-egg synth pop – immaculately constructed, perfectly useless music-box contraptions designed to break your heart. What’s more, he was signed to Merge, then the earnest torch-bearer of US indie rock. 69 Love Songs was the supremely audacious act whereby he willed a preferrable context into being – imagined himself as a peer of Sondheim rather than Superchunk.

It was, of course, a trick that could only be pulled off precisely once, and subsequent albums have emerged a little apologetically, each trailing a twinkling pretty standard or two, while Merritt continues to try to make good on his ambition of producing 100 Hollywood musicals. It may be that Merritt’s genius is ultimately too eccentric, too perverse, too bleak to conquer modern Hollywood (though if “Hallelujah” can wind up in Shrek, clearly anything can happen). It may be that Merritt took a devastating creative advance on future achievements, and is now spent. Never mind: 69 Love Songs remains a matchless achievement: a career-spanning ‘greatest hits’ box that, spendthrift of genius, he somehow contrived to compose in one go.

Q&A
Stephin Merritt
69 Love Songs originally occurred to you as a conceit – originally to write 100 love songs. Do you such concepts occur to you often? How many make it out of the notebook?
Sure do. Possible albums, musicals, books and movies occur to me several times in a typical night, along with one-offs in other media, the vast majority never get beyond my little notebook. For example, I imagine writing a superhero comic with punningly named characters drawn from idiomatic clichés: the observant jew, the vanishing middle class, white flight, the gay mafia, the yellow peril, the ugly american, etc, with the appropriate superpowers. If I thought I was going to get around to doing this, I of course wouldn’t tell you about it.

What are your abiding memories of recording the album?
Mostly I remember my miniscule wall space all covered in construction paper, in lieu of a project board.

Was the audacity of the conceit a way of artificially recreating the workload of an average Brill Building composer circa 1962? Is such an environment – hard work, focus, coffee, cigarettes – close to happiness for you?
Yes… Except for the focus, coffee and cigarettes. My hard work involves daydreaming, alcohol, and actual oxygen.

You mention somewhere that around 50 songs were discarded – have any of them surfaced elsewhere?
I think 31 songs were discarded, for various reasons. “The Sun and the Sea and the Sky,” rejected for not being about romantic love, ended up on ‘Obscurities’ [Merritt’s 2011 compilation of B-sides, etc].

Did you realise at the time that this was the record that would make your name, beyond the indie scene? Was global acclaim something you had dreamt of?
Everyone famous quickly discovers that fame and fortune are independent vectors.

Are you surprised at how your songs have subsequently entered people’s lives? Do you ever think people may have missed the point of a song?
There is always the possibility that it is I who miss the point of a song. Playing “The Book Of Love” at a wedding sounds like a terrible idea to me, but it seems to be becoming a wedding standard. Whatevs.

How did you find listening to 69 Love Songs again for the remastering?
Every time we tour I listen to all the records to choose material. I need to listen seldom enough that I can hear new things and be surprised.

How do you feel about the vinyl revival in general – I imagine you as more of a CD person?
Actually, I really miss cassettes.

How important is the sequencing of the album? Is someone missing out if they listen to the album on random on Spotify? (I remember Lou Reed telling people to listen to his New York LP all the way through in the right order in one sitting – do you sympathise?)
He must have been in a mood. Almost any album since 1966 should be listened to that way.

Do you have any sense of 69 Love Songs as an album that was influential on other artists?
Los Campos Magnéticos [the Argentinian trio who perform cabaret versions of Merritt’s songs in the bars of Buenos Aires] are probably the best band in the world, but I don’t know for sure cause I haven’t heard them all.

Are you still living in LA?
No, I moved three years ago. I still have a studio apartment in New York, but my house full of instruments is upstate. I desperately miss the silent movie theatre, so don’t be surprised if I move back.

Have you found anywhere as conducive to writing as the gay bars of New York?
I find many gay bars in the UK and the Netherlands very comfortable too.

69 Love Songs feels to me like the last, perfect document of lower East Side/East Village New York culture. Would you agree?
‘Perfect’ is exactly wrong, but I’m afraid you may be right about ‘last’. Now there are joggers in the streets.

Do you think 69 Love Songs would work as a jukebox musical (a la We Will Rock You/Mamma Mia/etc?)
I do think the idea is translatable into other media; that is not one of them.

What was the last great song you heard?
I have only recently discovered Ketty Lester. She has great material, and what comes to mind is a delightful song called “Lonely People (Do foolish Things).”

What was the last great song you wrote?
“Why I Am Not A Teenager.” It’s not out yet.
INTERVIEW: STEPHEN TROUSSÉ