Wes Anderson returns with Bill Murray in tow for his third film. 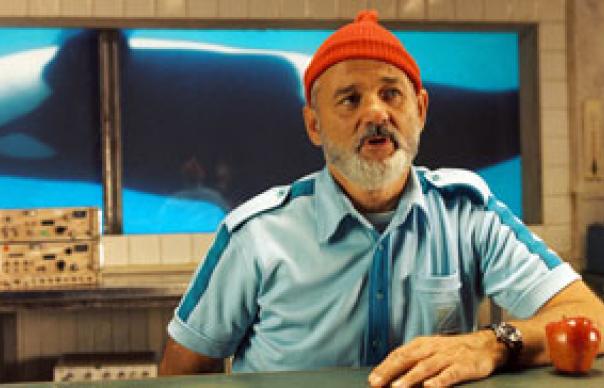 Once you accept that this isn’t quite a comedy and isn’t exactly a tragedy, The Life Aquatic is a mischievous and melancholy thing of wonder. A post-modern Moby Dick with some moping and much dicking around, it’s daring, different and memorable. Ideas run like water, the cast are decidedly odd, and Anderson confirms himself as the palatable, fashionable face of slightly askew weirdness. It’s I Heart Huckabees with a story (of sorts), or Punch Drunk Love with more defeatism and depth. Lots of depth, almost despite itself.

Like dolphins, dolphins can swim. The liberal use throughout of Portuguese acoustic versions of Bowie classics (sung by City Of God actor Seu Jorge) is just one of its sweetly challenging quirks. Anderson’s third film with Murray (following Rushmore and The Royal Tenenbaums) is arch, deadpan and, for all the water, dry. This can be annoying or exhilarating: Murray’s adept at this glazed gaze, others less so. Payback comes when a late pathos seeps through the studied surrealism and cold, clever comedy. The film sneaks up on you, decks you with an after-burn concerning mortality, having spent the best part of two hours convincing you it’s a dark Dada farce. It’s again about both misfits and families. Those not fond of Anderson’s techniques will find it smart-ass and chilly. Those attuned to his bends will follow it down, leagues.

Murray leaves much open to translation as expressionless oceanographer Steve Zissou. Acclaimed for his underwater documentaries, ageing Zissou is hitting hard times. Funding’s scarce (from scatty producer Michael Gambon), and his name doesn’t wow the world the way it used to. When the mysterious – feasibly non-existent – Jaguar Shark kills a colleague, he peps up the crew of his ship The Belafonte (a dazzling construction) for another exploratory mission. “What would be the scientific purpose?” asks a reporter. “Revenge”, he answers.

So Team Zissou – a queerly-uniformed crew that can only be described as motley – embark on their make-or-break voyage, the odds against them. They include airline pilot Ned (Wilson), who introduces himself as “possibly” Steve’s long-lost son: Steve’s stoned when they meet, and enjoys the notion, warms to the kid’s enthusiasm. English journalist Jane Winslett-Richardson (Blanchett) tags along for an interview, heavily pregnant. She’s soon disillusioned by her jaded idol. “We’re being led on an illegal suicide mission by a selfish maniac,” mutters the usually topless script girl. Noah Taylor, background-funny as ever, composes the unutterably bad electro score for Steve’s films. The comic jewel on board however is blindly loyal German engineer Klaus (Dafoe): a smitten, nodding puppy. Dafoe’s rarely been looser.

Steve’s estranged wife Eleanor (Huston), “the real brains”, hovers, ready to help or hinder, while his nemesis/rival (Jeff Goldblum) sniggers and mocks. The interplay between all these eccentrics is half the film.

When “action” kicks in, though, Anderson doesn’t hesitate to dive overboard. Recklessly sailing uncharted waters, The Belafonte’s attacked by pirates, forcing Steve into a heroic shoot’-em-up rescue to the strains of Iggy’s “Search And Destroy”. Goldblum and bond company rep Bud Cort are kidnapped; our lunatic seamen go in pursuit. There are McGuffins about money, and Steve’s dead rapport with Eleanor flickers. But he’s really in love with the aloof Jane. Who’s in love with Ned. For all his dumb courage, Steve senses a midlife crisis. He must find the Jaguar Shark to give his life meaning, to prove to those he values that for all his impotence in other areas – “Do you not like me any more?” he gruffly sighs – he’s still the best at what he does. There’s a lovely grace note at the ending.

The interiority of Tenenbaums is opened out, with chases, gunplay, sharks and wild, animated underwater creatures. But it’s still very Anderson, with jokes emphasised in the “wrong” places, and rhythms wilfully off the beat. Murray’s so dour that Wilson’s cloned blankness is too much. Blanchett’s boldly bizarre, and the rest of the team are allowed camp, broad humour. Twisting like an eel from tired narrative conventions, coining its own metre, this bends your brain till the finale makes perfect, poignant sense. Floats like a jellyfish, stings like a ray. Jacques Cousteau was never like this.