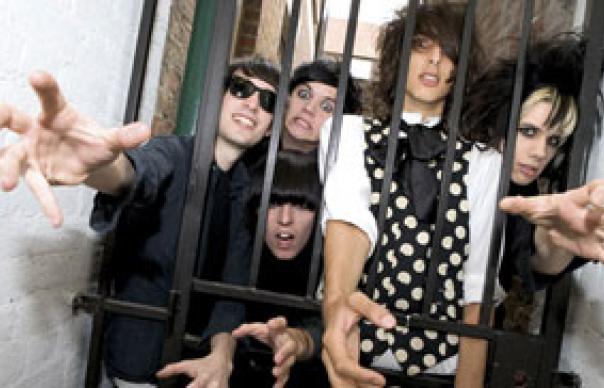 Like If’s Mick Travis after a nasty bout of electro-shock therapy, The Horrors have waged war on indie conformity over the last 12 months with a sadistic glee. Interviews have seen articulate discourse on everything from Lord Rochester to obscurist psych-rock (the band’s fanzine, Horror Asparagus Stories, takes its name from a single by ‘60s garage types The Driving Stupid). The video for debut single “Sheena Is A Parasite” was directed by Chris “Windowlicker” Cunnigham, starred Samantha Morton and proved them to be men of both wealth (i)and(i) taste – singer Faris Badwan and bassist Tomethy Furse are former pupils of Rugby School (alumni: Rupert Brooke, Lewis Carroll). The band’s image, meanwhile, is a cartoonish gothic which wouldn’t look out of place on the starting grid of Wacky Races.

So far so intriguing. But having bagged a hefty deal with Poydor offshoot Loog, the question remains: can The Horrors go the distance? Produced by a slew of heavyweights including Bad Seed Jim Sclavunos, Alan Moulder (Depeche Mode) and the Yeah Yeah Yeahs’ Nick Zinner, Strange House has the feel of a record with a troubled gestation. Tunes, heavily influenced by no-wave pioneers Mars and James Chance And The Contortions, come swathed in skeletal surf guitars and two-note organ riffs, whilst the lyrics – a bloody catalogue of death and dissection – suggest Badwan is, like Roald Dahl’s Willy Wonka, purging a childhood surrounded by medical textbooks (his father is an eminent neurosurgeon).

It’s complex, uncompromising stuff, and, when Badwan howls, “Collarbone crushing/ Like a butcher/Feeling the mash of bone and sinew!” in a rage of sickness and abhorrence in “Gloves”, it’s enough to terrify passing Kooks fans. If the debt to The Velvets becomes obvious on “Excellent Choice” (a rehash of “The Gift”), the overall effect has the magnetic menace of Village Of The Damned. Whilst indie orthodoxy dictates commercial success at all costs, The Horrors are feeling their way through the cobwebs to rock’n’roll’s darkest recesses.